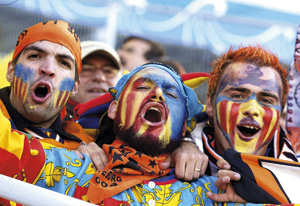 Spain’s third city after Madrid and Barcelona, also has two clubs in the top division, although Valencia are very much the flagship. They reached the Champions League Final two years running (2000 and 2001) and since then have twice seen off Real Madrid and Barcelona in the Spanish championship race (2001-02 and 2003-04) and won the UEFA Cup in 2004.

Valencia, nicknamed Los Ches (the lads), were transformed from also-rans in the 1990s. The city had a new urban dynamism, and the club, under president Francisco Roig, had much more financial clout.

Trailing in their wake are modest city rivals Levante, who have spent most of their existence yo-yoing between divisions. After a grim struggle, Los Granotes (the frogs) avoided relegation last June to book themselves another season with the big boys.

Valencia play at a football temple, the Mestalla, close to the centre of town. However, they are building a New Mestalla in the north-east of the city, the design based on Bayern Munich’s highly-praised Allianz Arena. The club was expected to move in at the start of the 2009-10 season, but financial problems have delayed construction. The capacity will be much greater than the current ground – 78,000 against 53,000. Levante, meanwhile, run out at a shabby, municipal ground with a 25,000 capacity.

Despite the gap in pedigree, derbies have always been fierce. In the early years, the Levantinos and the Valencianistas met in the regional championship. But all the same, the clubs would lend each other key players if either had to face the common enemy: Barcelona. The derby of January 2005 was the clubs’ first league clash for 40 years, although they had met in the Cup in between.

Valencia, one of Europe’s most exciting sides over the past decade, have relied for many years on pacy South American players to please the boisterous Mestalla faithful. In the early 1960s it was Brazilians Chicao and Waldo, who helped the Ches win the Fairs Cup two seasons running. In 1980, Argentinian World Cup forward Mario Kempes scored the goals that took Valencia to another European final, the Cup-winners Cup, when they beat Arsenal on penalties.

The domestic league triumphs earlier this decade came under Rafa Benitez. His less spectacular but more solid squad took advantage of managerial in-fighting and dips in form at Real and Barca to nip in and win La Liga.

Valencia, backed by the genial, manic drummer Manolo, are one of those rare clubs who are local enough to be in touch with their fans while firmly ensconced in the European elite. All that may change with the new, less intimate stadium.

Valencia’s steep-sided Mestalla stadium (Avenida Aragon 33; +34 963 372 626), opened in 1923, is a short walk from Aragon station on metro line 5, two stops from central Colon. You can also access via Facultats on line 3. After cutting down C/Doctor Juan Regia, you soon come to the ground. The main ticket office is open 10am-2pm, 5pm-8pm on weekdays before a matchday, Saturdays 10am-2pm, and three hours before kick-off.
Facing the booths is Plaza de Valencia CF, where you’ll find a modest club shop and three bars in a row. One, the Museo Deportivo de Manolo del Bombo, is a shrine to the game and the career of the smiling, rotund gentleman behind the bar, he of the huge drum the cameraman always picks out when Spain play in the World Cup. Photographs of Manolo’s travels cover every inch of space on the walls.
There is another club shop in the centre of town, at Pintor Sorolla 25, a modern, well-stocked two-storey establishment that also sells match tickets. The Valencia faithful gather in the Fondo Norte (north end). For the neutral, a spot in the Tribuna Numerada offers the best view for a reasonable price.
Levante’s Ciutat de Valencia stadium can be reached by bus – take the No 11 from the Plaza del Ayuntamiento to C/Santiago Rusinol, also accessed from Machado metro station. There are ticket offices at either end of the stadium along Rusinol – the furthest one from the main Avenida de Alfahir road stands beside the modest club shop. 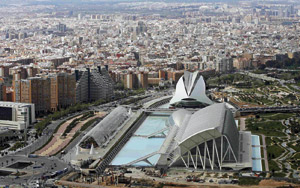