The 50,000-capacity Ernst-Happel-Stadion, named after the wily coach who died in 1992, staged seven Euro 2008 games in all. It is set in the large Prater Park, which is also the site of the Riesenrad Ferris wheel immortalised in the film The Third Man.
Away from the bright lights of the national stadium, the local game hinges on the rivalry between Vienna’s two historic giants, Rapid and FK Austria. Although both finished only in mid-table in the 10-club Bundesliga last season and have made only a slow start to this campaign, the “Wiener” derby is still the most anticipated fixture in the calendar. Their next meeting is on October 20 at Austria’s modest Franz-Horr-Stadion.
Between them, Rapid and Austria have won 54 of the 94 league championships. Their history echoes the glory days of Austrian football – and the birth of the European game itself.
Vienna’s illustrious football history owes much to Hugo Meisl, a Jewish bank clerk who was enamoured with English culture and the ball game that went with it. Meisl dedicated his life to the development of the game in Vienna and to furthering the cause of international football.
English workers founded Vienna’s first two football clubs, First Vienna FC and Vienna Cricket & Football Club (or simply “Cricketer”) in the late 1890s. Meisl then formed a branch of the latter, known as Amateure and later FK Austria. Other clubs sprang up around the capital, including 1.Wiener Arbeiter-Fussballklub, formed by workers from a hat factory, who changed the name to Rapid in 1899. Vienna has three clubs languishing in the eastern section of the third division – First Vienna, Admira Wacker Modling and Wiener Sportklub – but all had proud pre-war histories.
Meisl was the instigator of the first international to take place in continental Europe, between Austria and Hungary in Vienna in 1902. He invited English coach Jimmy Hogan to the city, and the local clubs began to play what became known as the Danubian style of short, intelligent passing.
With Vienna at the forefront of the game’s technical development, Meisl introduced full-time professionalism in 1924 and set up the Mitropa Cup and the International Cup, Central European predecessors of the European Cup and European Championship respectively.
The Austrian national team will probably struggle to qualify from their group at Euro 2008. In contrast, the Wunderteam overseen by Meisl eight decades earlier were world class. Led by the slight, skilful Matthias Sindelar, “the Man of Paper”, Austria were the purists’ favourites to win the 1934 World Cup. With a team mainly comprised of players from FK Austria and Rapid, who had both won the Mitropa Cup, the Austrians beat rivals Hungary but lost in the mud of Milan to eventual winners Italy in the semi-finals.
Mysterious death
Sindelar would never get another chance on the world stage. By the time of the next finals the Nazis had swallowed up Austria into a Greater Germany, for whose joint XI Sindelar refused to appear. In January 1939, the FK Austria star of 15 years was found dead in mysterious circumstances, probably the result of toxic fumes from a gas heater. Meisl had died two years earlier.
During the inter-war period, the Wiener derbies showed the best of the Austrian game, the finesse of Sindelar’s Violetten matched by the working-class savvy of Karl Rappan’s Rapid.
After the war, the tactical nous of Ernst Happel, Gerhard Hanappi and Ernst Ocwirk kept both clubs and the Austrian game to the fore. Ocwirk’s managerial influence steered FK to more titles. Hanappi went on to become an architect and he designed the new stadium of Rapid, his former club, which opened in 1977.
By then the rise of clubs from Innsbruck, Graz and Salzburg had eclipsed the capital’s hegemony. The arrival of owner Frank Stronach in 1999 gave FK Austria the budget they needed to wrest the title back, in 2003. His resignation in 2005 led to the departure of many key players, though Austria managed to regain the title in 2006. Rapid are still the most popular club in the land – but certainly not the richest. 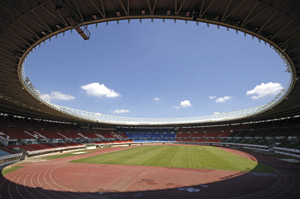 The national Ernst-Happel-Stadion is set in the Prater Park, a stroll down from Praterstern Wien-Nord on the U1 metro line or from Olympiaplatz on the 21 tram line.
Rapid’s Gerhard-Hanappi- Stadion is by the western terminus of the U4 metro line at Hutteldorf. Capacity is 18,500.
Tickets are available from the Rapid shop or online at www.skrapid.at. FK Austria’s Franz-Horr-Stadion is at Fischofgasse, on the 67 tram route, three stops (to Altes Landgut) from the U1 metro terminus at Reumannplatz. Capacity is 11,800. Tickets are available online.
Vienna’s three regional league east clubs are spread around the city. First Vienna play at the 5,000-capacity Hohe Warte stadium, near Heiligenstadt station on the U4 or S45 metro lines.
Wiener Sportklub now host more modest teams than Juventus, whom they beat 7-0 in Vienna in the 1958-59 European Cup. Their Hernals stadium can also be reached on the S45 line.
Admira, who also bloomed under Hugo Meisl, are now called Admira Wacker Modling. They play at the Bundesstadion Sudstadt in Maria Enzersdorf. Catch the Badner-Bahn from Karlsplatz, journey time 30 minutes.