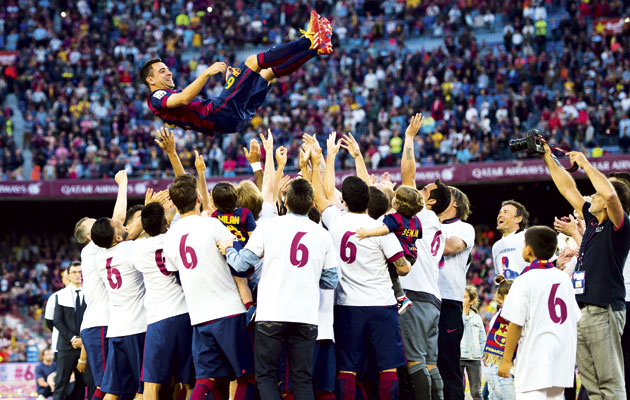 Xavi Hernandez’s last three matches for Barcelona all finished the same way: with him lifting a trophy. The man who has played more games for the club than anyone else – and arguably the most important footballer in Spain’s history as the ideologue behind the most successful generation there has been – departed European football after exactly 900 games for club and country. He did so having won 28 senior trophies: 25 for his club, plus two European Championships and the World Cup.

The final three trophies arrived in the space of a fortnight. On Saturday, May 23, he lifted the league title trophy; the following Saturday it was the Copa del Rey; and the Saturday after that he raised the European Cup in Berlin. Victory over Atletico Madrid clinched La Liga with a week to spare and the trophy was presented six days later. Athletic Bilbao were defeated in a Spanish Cup Final marked by Lionel Messi scoring one of the most astonishing goals in memory. And Juventus were beaten in Berlin, with Ivan Rakitic, Luis Suarez and Neymar scoring.

In Berlin, they went wild; back in Barcelona, supporters poured down the Ramblas. The celebrations continued long into the night and started up again when the team arrived the following day. And rightly so, too. Barcelona had won the treble, only the seventh team in European football history ever to do so and the first team ever to win it twice: under Pep Guardiola in 2009 and again six years later under Luis Enrique.

When Xavi was called to lift the Champions League, he was with his companion for the last 15 years – the ball. Tucking it up his shirt, he took the trophy from Michel Platini. It was almost one o’clock in the morning when he finally left the Olympic Stadium, carrying the cup with Sergio Busquets, the midfielders holding an “ear” each. “This ending is incredible,” Xavi said. “It does not get any better than this.”

He had been on the verge of walking away last summer, but had eventually decided to wait a year. His role may have been reduced, but he was grateful to Enrique for persuading him to stay. “I’m so glad that he could leave this way,” the Barcelona coach said. Yet he could never have expected this.

Few teams have deserved to win the European Cup so clearly: Barcelona had beaten the champions of Holland, France, England, Germany and Italy. Manchester City (three), Bayern Munich (five), Paris Saint-Germain (five) and Juventus (three) had all conceded at least three times against them. Two of the competition’s three top scorers were theirs: Messi and Neymar, like Cristiano Ronaldo, finished on 10 goals. Suarez, who had begun the season banned, scored seven, including two in Paris, two in Manchester and the second goal in the Final.

And yet, when the draw for the last 16 was made, many considered Manchester City favourites against Barcelona.

Coming up to Christmas, it was Real Madrid who seemed most likely to take the title in Spain. And when Barcelona were beaten by Real Sociedad in the first game of 2015, the ensuing crisis brought the sacking of sporting director Andoni Zubizarreta and a call for presidential elections. The club appeared to be on the verge of sacking the coach too, amid reports of his relationship with Messi breaking down.

One poll had 68 per cent of fans wanting Enrique to go.

How things change. “Everything changed,” Messi admitted. Barcelona recovered, the pieces falling into place. Messi, Neymar and Suarez began to forge a terrifying front three, with the Argentinian now occupying a right-sided position, as a starting point at least, and the Uruguayan moving into the middle.

“The secret,” Neymar said, “is that we’re friends.” It was not merely a platitude: the three of them, with Javier Mascherano too, are genuinely close.

By the end of the season, they had scored 122 goals between them. Suarez had 25. He had set himself a target of 20 goals. “So I have five left over for next season,” he said in Berlin. More significant was the distribution of those goals, an eloquent comment on the way that Barcelona had improved: of his 25 goals, only three had been scored before Christmas. Defeat against Real Sociedad was a turning point: the following week they defeated Atletico Madrid and their season really began.

Barcelona went 19 games, playing every team in the league, winning 17, drawing one and losing one, before they played Atletico again. Victory took the title; they had racked up 52 of 57 points. From the Real Sociedad game to the end of the season Barcelona won 30 times.

As Barcelona improved, so Madrid stumbled. There wasn’t a dramatic collapse, but they came up short. Ronaldo was top scorer again, racking up incredible statistics once more, but he has won just one league title since he came to Spain. The world club champions and European Super Cup winners,

Madrid failed to claim any of the major trophies this season. No coach had done that and survived since Alfredo Di Stefano in 1983, and Carlo Ancelotti was sacked soon after the end of the season. Asked why, and what was it that the coach lacked, the president Florentino Perez replied: “I don’t know.”

If the decision itself was questionable, the way it was handled was worse, demonstrating a lack of the class and dignity that Ancelotti has in abundance.

Right to the end, they avoided him, briefing against him but never admitting to his face what he could no longer fail to see: that he was about to lose his job. Almost exactly a year after winning Real Madrid’s 10th European Cup, a trophy that obsessed them and one that they had waited well over a decade for, they finally sacked the man who took them there.

Next season, they will try again under Rafa Benitez. They will be joined by Barcelona, the defending champions, and by Atletico Madrid, Valencia and Sevilla. Spain will have five teams in the competition after Sevilla qualified by winning the Europa League for the second time in a row, the fourth in their history – more than any other club.

Sevilla, the first club to benefit from a change in UEFA’s rules, fully embraced the Europa League. The joy that they felt in winning the competition, and the excitement of Villarreal and Athletic Bilbao, who will represent Spain in the competition next season, revealed the absurdity of those clubs that turn their nose up at the competition, eschewing glory and emotion for…what, exactly? Sevilla continued to compete domestically, which did little for the theory that it gets in the way of league progress, and there is a deeper question too: what are you playing for?

As the Sevilla coach Unai Emery put it: “When I arrived at Sevilla, the first thing they said to me was: ‘Unai, playing in the Champions League, like Valencia did with you, is lovely, but you haven’t experienced what it is to win things’. Now I have; I have felt it. And it is the greatest feeling there is, something really shared.

“Football is emotion. There’s an economic [imperative] but what fans really want is to enjoy their team.

“If you have money but don’t generate feeling, it’s worthless.”

Sevilla’s victory in Poland was sealed by two superbly taken goals from Carlos Bacca, the striker who once sold fish to survive. Not only fish; it is just seven years since he was a bus conductor in Colombia.
At the other end of the table, with Cordoba relegated long before the end of the season, striker Florin Andone described himself and his team-mates as a “disaster”, admitting that he felt “ashamed” as the team were made to travel almost 800km by bus on the final day of the campaign as a punishment.

There were four teams still fighting to beat the drop that day: Almeria, Granada, Deportivo La Coruna and Eibar. Almeria faced Valencia, who were chasing third and being chased for fourth. Granada, who’d won three in three, having previously managed four in 33, played Atletico. Deportivo travelled to the Camp Nou. And Eibar played Cordoba.

Within 10 minutes, the two teams that started the day in the drop zone, Eibar and Almeria, had moved above the two that had started out of it (Deportivo and Granada). But things had only just started and the composition of the relegation zone was to change seven times.

Deportivo, 2-0 down at Barcelona, came back to draw 2-2, while Almeria, who were leading, got pulled back by Valencia. Down on the bench, players had radios, listening nervously to results coming in from elsewhere.

Few expressed the tension better than Deportivo’s Lucas Perez. “This is mad, lots of the players are crying,” he said after Deportivo escaped.

They had thought they were dead and buried; instead, they had survived. So too had Granada, where a pitch invasion began. Jose Ramon Sandoval, the coach who had been in charge for just four games on a one-month contract, had rescued them with 10 points from 12.

Instead it was Almeria who were relegated, while Eibar, who finished level with Granada and Deportivo, joined them on the head-to-head record. Jon Errasti, the Eibar-born captain, one of 10 players who won two consecutive promotions with the club, heading from the third tier to the top flight only to be relegated back down again, summed it up: “It hurts,” he said.

But then it all changed again. Because of a debt with the tax authorities and their squad, the league relegated Elche, and Eibar will take their place in the first division – or so says the LFP president, Javier Tebas. First, though, there will be a legal challenge.

It has been a long season; it may yet be a long summer too.

PLAYER OF THE SEASON
Lionel Messi
(Barcelona)
Despite rumours of a fallout with coach Luis Enrique at the turn of the year, the world’s greatest player hit the heights once again, scoring 58 goals in 57 appearances and winning the treble in the process.

NEWCOMER OF THE SEASON
Jonathas
(Elche)
In his first season in Spain, the Brazilian striker proved crucial to Elche’s 13th place finish. However, even his talents may not have been enough to keep his side up as they were demoted due to financial problems.

COACH OF THE SEASON
Luis Enrique (Barcelona)
Despite suffering plenty of early season criticism, he ended the campaign by emulating Pep Guardiola’s feat of guiding Barcelona to the treble. The 45-year-old’s reward was a contract extension until 2017.

MATCHES OF THE SEASON
Oct 25 Real Madrid 3 Barcelona 1
Luis Suarez makes his debut for Barcelona following the end of his global ban but Madrid came out on top, with Karim Benzema producing one of his best performances.

Jan 4, Real Sociedad 1 Bareclona 0
Defeat in the first game ofthe new year and a seeming crisis at Barca brings the sacking of sporting director Andoni Zubizarreta and a call for presidential elections, with coach Luis Enrique’s job on the line.

Jan 10 Real Madrid 3 Espanyol 0
Liga leaders Madrid continue their winning streak but Gareth Bale is jeered by some supporters for not passing to team-mate Cristiano Ronaldo.

May 17 Atletico 0 Barcelona 1
Barcelona clinch the Liga title with a game to spare on the ground where they lost their crown to Atletico exactly a year earlier.

CUP WINNERS
Barcelona beat Athletic Bilbao 3-1 at Camp Nou to win the second part of their treble. Barca’s opening goal was a brilliant solo effort from Lionel Messi, who evaded the challenges of three Bilbao defenders before surging into the area and finishing with a low shot.

RELEGATED
Almeria and Cordoba. Elche
have appealed their demotion for financial irregularities. If the appeal is successful, Eibar will go down in Elche’s place.

PROMOTED
Betis, Sporting Gijon and the winners of the Segunda Division play-offs. 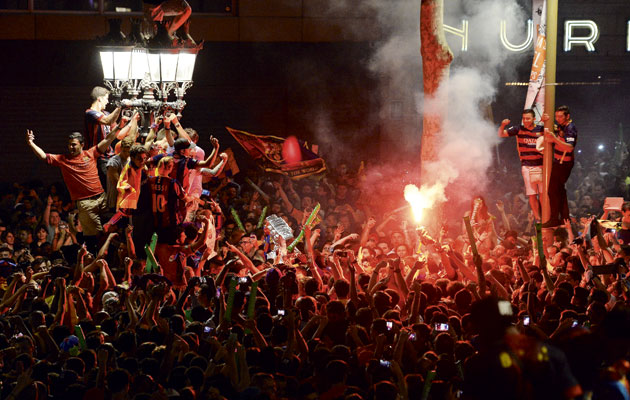