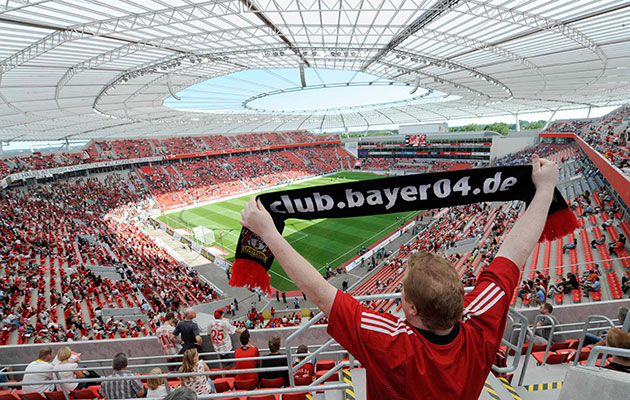 Leverkusen is one of 175 soccer cities featured in Libero, the digital travel guide for football fans. Regularly refreshed with new destinations and travelogues, Libero is a one-click treasure trove of football trip tips, tales and trivia. See www.liberoguide.com/leverkusen/

The conglomeration of Leverkusen has grown in tandem with the local football club and its parent company, pharmarceutical giant Bayer. When the club was formed a century ago, this area just over the Rhine from Cologne was nothing but a grouping of small settlements. Four joined together to form the town of Leverkusen in 1930. The more tourist-friendly settlement of Opladen joined after the war.

The club owes much to the worldwide success of headache tablets. This modest local pharmaceutical company, co-founded by Friedrich Bayer, patented the aspirin in America the same year that they founded their sports club, 1904. Aspirin went on to become the world’s biggest selling painkiller, taken to the moon by Neil Armstrong.

The football section of the Bayer works’ sports club, formed in 1904, played lower-league football until reaching the Oberliga West in 1951, the highest regional level before the Bundesliga was formed 12 years later. The club soon built the Ulrich-Haberland-Stadion, over the water from the sports park where the part-timers had been playing for 25 years.

While Schalke and Dortmund joined the new league in 1963, Leverkusen went to the Regionalliga. There followed a few fallow seasons before promotion, under wily old Willibert Kremer, in 1979. Under Erich Ribbeck, the club gained a foothold in the top flight, and surprised everyone by beating Espanyol on penalties in the UEFA Cup final of 1988, clawing back a 3-0 deficit from the away leg. Star of the show was Cha Bum-Kun, whose late equaliser tied the fixture, the highlight of his near 200 games for the club.

But it was under ambitious general manager Reiner Clemunt that Bayer Leverkusen really took off. Over ten years, he had the Ulrich-Haberland converted into the BayArena, completed in 1997.

Equally accommodating to business clients as to ever-increasing standing fans, the 30,000-capacity stadium is the perfect example of how to serve a community of 160,000 people while confidently hosting the likes of Real Madrid and Manchester United on European nights. 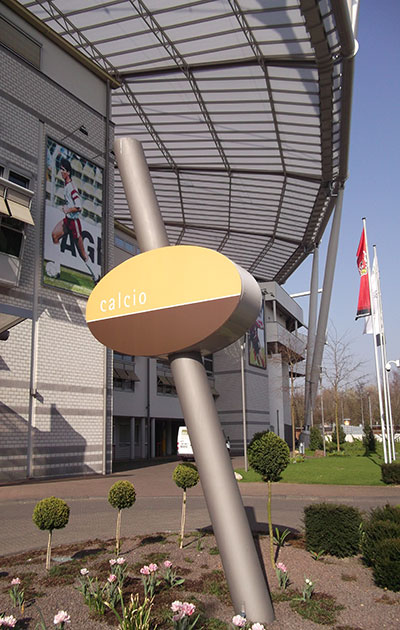 Picking up quality East Germans Ulf Kirsten and Andreas Thom, the rotund ‘Calli’ Clemunt persuaded Rudi Voller and Bernd Schuster to join Leverkusen, who rarely failed to finish top six. The prolific Kirsten scored the only goal of the 1993 cup final, Leverkusen’s only domestic silverware in 25 years of near misses.

The cruellest came in 2002. With another top East German, Michael Ballack, plus Bernd Schneider, Oliver Neuville and key Brazlians Ze Roberto and Lucio, Leverkusen were sailing to the title before Dortmund pipped them. Ballack and company had also beaten Liverpool and Manchester United en route to the Champions League Final, decided by a wonder strike by Zinedine Zidane. Bayer even lost in the final of the German Cup, to Schalke, despite opening the scoring with rising star Dimitar Berbatov.

As a separate entity, despite the tag of ‘Neverkusen’ for second-place finishes, Bayer’s consistency has been remarkable – only once out of the top ten since 1999.

Kiessling was top Bundesliga scorer as Leverkusen claimed third place in 2013, with fourth place achieved in the last two seasons. 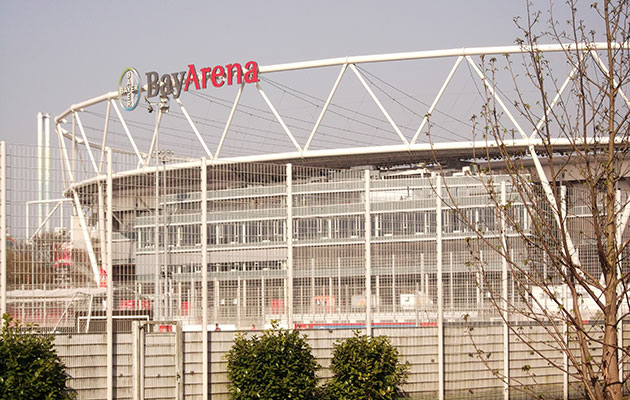 At the BayArena, the main standing C sector remains at the corner of the home Nordbereich and the Ostbereich along the sidelines but is now complemented by areas across sector D and E along the whole North End.

The visitors’ sector, also with a lower standing area, remains sector G in the opposite corner, between the Sudbereich behind the goal and the main Westbereich which houses the club shop and press area. The Lindner Hotel is found behind the Nordbereich. 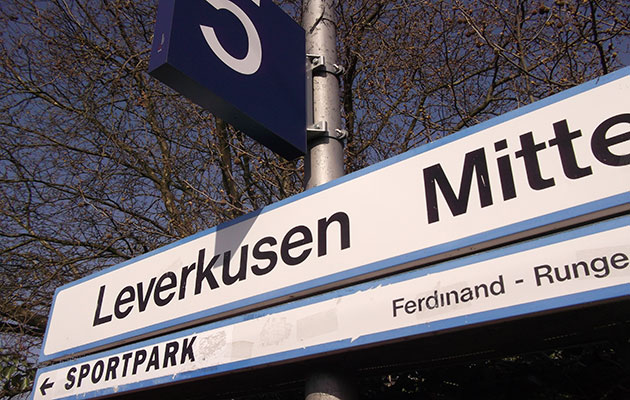 The BayArena is poorly signposted from Leverkusen Mitte station, 15-20mins from Cologne station by train or S-Bahn line 6. At Mitte, head to platform 5 and exit the station walking back parallel to the rails from the way you came. At a stream, turn right – the stadium is ahead, altogether 10mins from Mitte. 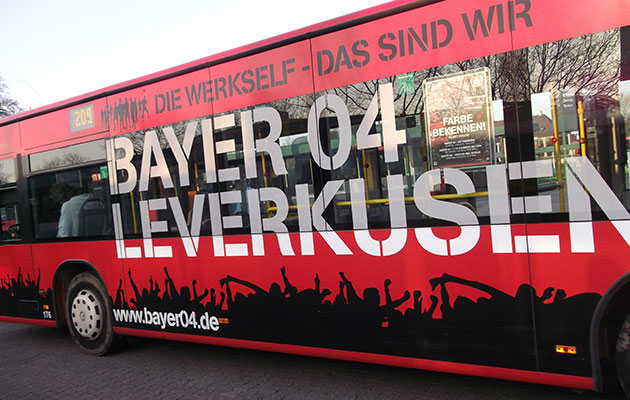 City buses serve communities around Leverkusen, match tickets valid for the journey 4hrs before kick-off. The hourly No.203 runs from Leverkusen Mitte to the Sportpark Manfort stop by the stadium 7mins and five stops away.

Tickets are distributed from the Bayer 04-Shop (Tue-Fri 11am-6pm, Sat 10am-2pm, 2hrs before kick-off) near the Lindner Hotel. Ticket windows are behind the Ostbereich, by main Bismarckstrasse behind the stadium. 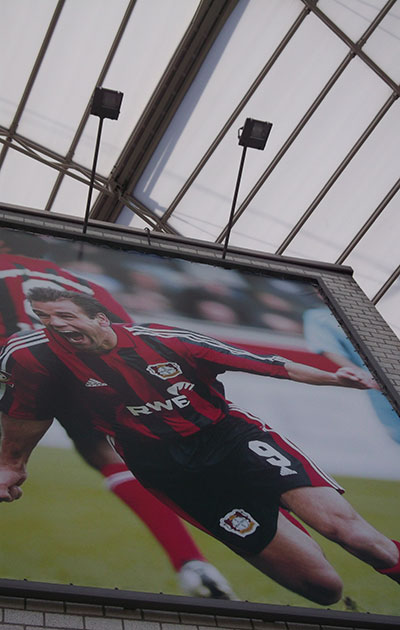 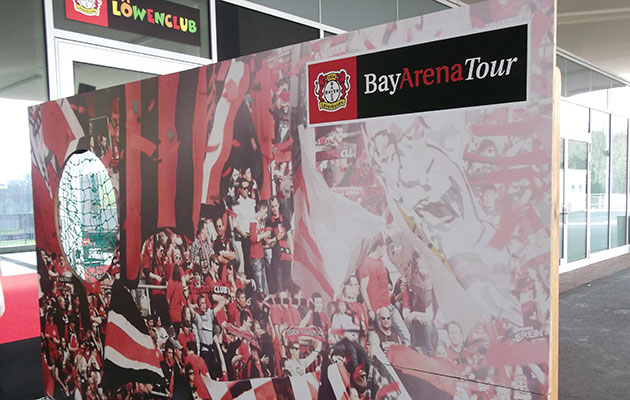 Signposted on Bismarckstrasse right across from the stadium, Pille is a must. Behind an indoor football pitch are a sports bar and large beer garden, perfect for a Kolsch while watching the sun set over the BayArena. There’s a children’s playground too.

At the stadium, snazzy lounge match-day bar/restaurant Calcio on the first floor of the Südbereich attracts an upscale clientele. 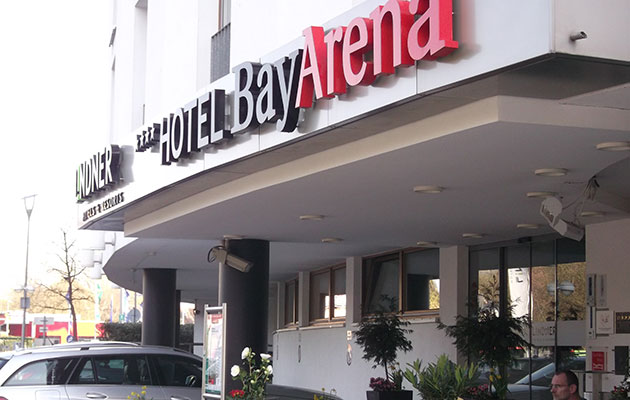 Leverkusen has one of Germany’s best stadium hotels, the four-star Lindner Hotel BayArena, built into the North Stand of the ground. It offers match-night packages of room, ticket plus €10 credit on a stadium card, breakfast and a drink in its bar. There are VIP packages too. Sauna, steam and gym are also on hand. The upscale bar/restaurant, Winner’s Place, with its numerous TVs for sport, is for hotel guests only on match days.