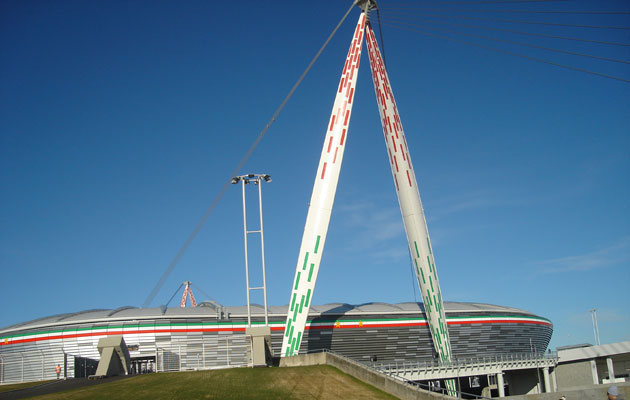 Turin is one of 125 soccer cities featured in Libero, the digital travel guide for football fans. Regularly refreshed with new destinations and the travelogue Soccer Sagas, Libero is a one-click treasure trove of football trip tips, tales and trivia. See www.liberoguide.com.

Home of Italy’s most successful club, Turin is a football city whose past is steeped in myth and tragedy. Its two clubs, current champions Juventus and Serie A’s Torino have both gained new stadia in modern times, ‘Juve’ a praiseworthy all-seater converted from an unloved arena on the northern outskirts of the city.

The Juventus Stadium is the leading example in Italy of a club owning their own ground, and one that many clubs are looking to follow. Many are still based at municipal grounds built, originally, in the Mussolini era before World War II.

In fact, Turin’s famous Stadio Comunale was called the Stadio Mussolini when it staged two 3-2 thrillers, part of the 1934 World Cup Finals. Post-war, the Comunale hosted Juve and Toro games, plus a number of Italy internationals, until it came to the World Cup of 1990.

In the wake of the Heysel disaster of 1985 in which 39 Juventus fans lost their lives, the authorities felt that a safe, sanitised and easily policed arena would serve Turin best. Right on the city outskirts, the Stadio delle Alpi, echoed with empty space between pitch and terrace. 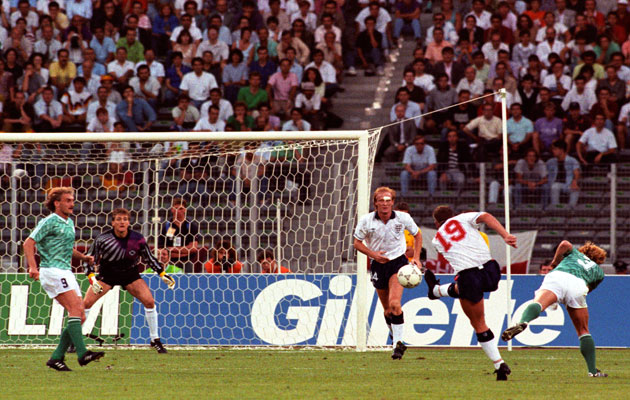 For Juventus, though, seven million supporters across Italy, the stadium was a white elephant, expensive to rent and devoid of atmosphere. The club started to play ‘home’ matches across the country.

In 2006, a match-fixing scandal saw Juve relegated for the first time, and the club decided to put its house in order. That same year, the Comunale was converted to stage various events for the Winter Olympics. The Stadio Olimpico di Torino became the new home for Torino, the iconic Marathon Tower still in place.

As Juve were playing their way out of Serie B, the club was developing its own home on the site of the unloved Stadio delle Alpi. Having taken the unprecedented step of buying the stadium for €25 million from the council, Juventus developed Italy’s first club-owned, football-focused arena. Giving priority to environmentally friendly methods – the stadium generates heat through solar panels and irrigates its pitch by reusing rainwater – the club were able to build a new arena from scratch for a modest €120 million. 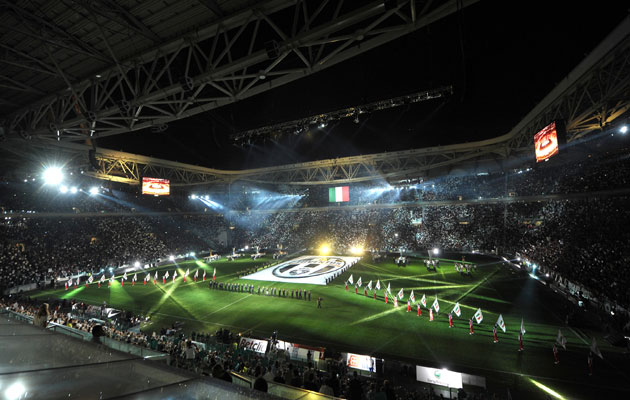 The Juventus Stadium (note the English name) was unveiled in September 2011 with a friendly against Notts County, the inspiration behind the black-and-white shirts a century ago.

Strikingly modern with flashes of red and green, its contemporary exterior juxtaposes with the stark beauty of the Alps in the immediate background. Holding 41,000 spectators, this intimate venue is the perfect solution to the club’s long-term stadium woes.

The adjoining and equally new Area12 mall contains a Juventus megastore, while a Juventus Museum was opened in 2013.

The Juventus Stadium has not only witnessed its owners coast to three consecutive titles – with a fourth pretty much assured – it also staged the Europa League Final of 2014 between Sevilla and Benfica.

The sectors are colour-coded, green (Sud, corso Grosseto) and yellow (Nord, via Druento) behind each goal, blue (Ovest) and red/orange (Est Centrale, strada Comunale di Altessano and Area12 mall) the best seats along the sidelines. Visitors are allocated four sectors in the north corner between the Nord and Est stands through via Druento. 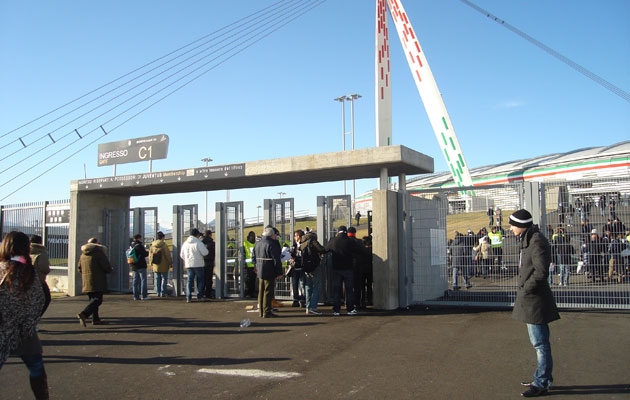 The Juventus Stadium is way north of town. On match days, tram No.9 runs from piazza Bernini on the metro line then back as far as Porta Nuova station. Tram No.3 from piazza Repubblica runs close by. On non-match days, bus Nos. 62, 72 and 75 can take an hour to reach the stadium from various parts of the city – for convenience, take the metro from Porta Nuova station to XVIII Dicembre then bus No.72.

At the stadium, there are two ticket offices by ingresso C, one by ingresso B and three by ingresso D, E and F on via Druento. You need ID to buy a ticket. Tickets go on sale ten days before the match. The cheapest seats are behind each goal (Sud, green and Nord, yellow). Those in the 2nd tier (2 anello) of the Ovest or Est Laterale are reasonably priced and offer a good view.

Online sales are dealt with by Listicket. 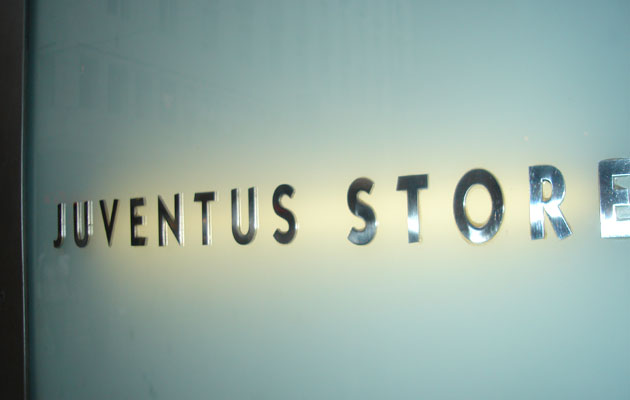 The main Juve store (Mon 12.30pm-9.30pm, Tue-Sat 8.30am-9.30pm, Sun 9am-9pm) is in the Area12 mall behind the East Stand on strada Comunale di Altessano. It’s the largest of its kind in Italy, with shirt-printing and a table-football table. In town, there are furry zebras galore at the Juve store on the corner of Garibaldi and XX Settembre by the Garibaldi stop on the No.4 tram line.

Tours (€10) last 70 minutes and run Mon-Fri at 10am, noon, 2pm and 4pm, and half-hourly Sat-Sun 10am-6pm except before and after matches. There are no tours on match days. The tour takes in the newly opened Juventus Museum (Mon-Sat 11am-7pm) behind the East Stand, offering a contemporary take on 115 years of club history.

On strada Comunale di Altessano, at the crossroads with via Sansovino, L’Elite features photos of the stadium being built while New York opposite is filled with TV screens. Further up, nearer the stadium, Alby and neighbouring Millegusti are standard choices, the former with Forst beer and cheapish meal deals in the basement restaurant. 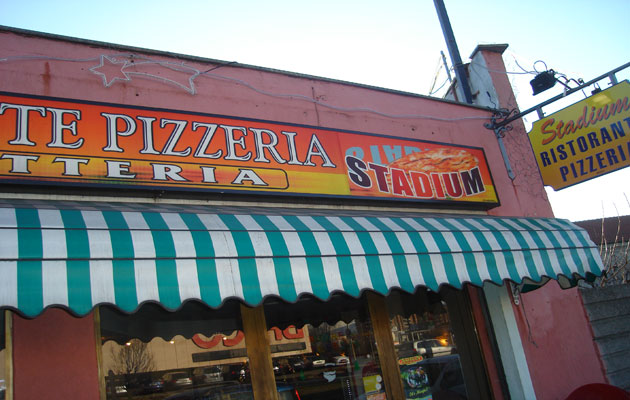 The best option is just round the corner on via Druentom (No.135): the Stadium is a friendly bar/pizzeria with photos of Old Trafford, the Stadio delle Alpi and the current Juventus Stadium. There are bottles of Moretti and Ceres in the fridge, a tap of Pils de Brabant beer and a bar-like atmosphere in the front area. 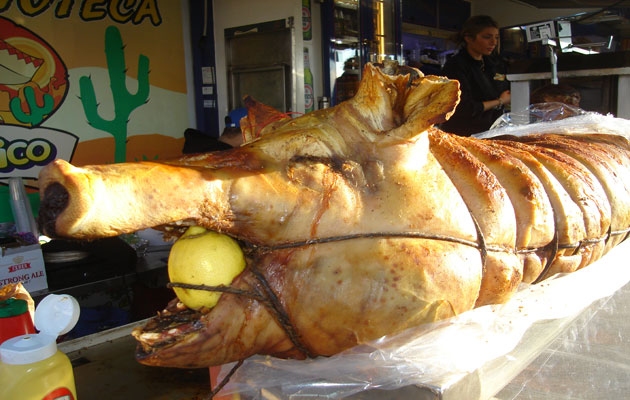 If you’re after a quality pre-match meal, the Ristorante delle Alpi (www.ristorantedellealpi.com) is just off Comunale di Altessano a 15-minute walk away. Look out for the €23 and €26 menus.