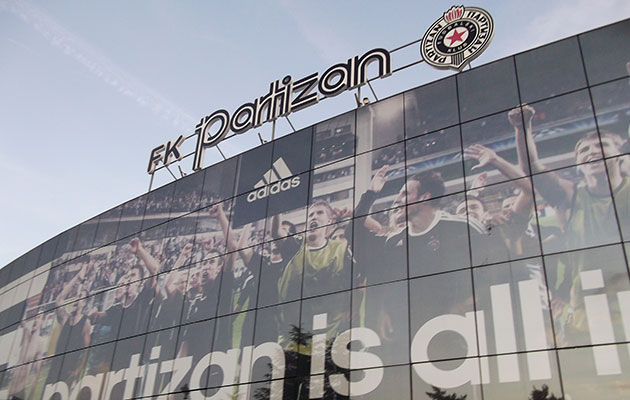 Belgrade is one of 175 soccer cities featured in Libero, the digital travel guide for football fans. Regularly refreshed with new destinations and travelogues, Libero is a one-click treasure trove of football trip tips, tales and trivia. See www.liberoguide.com/belgrade/ 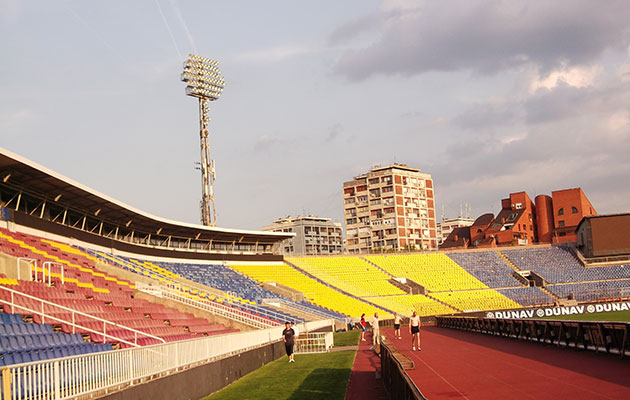 A short walk downhill takes you from Red Star’s Marakana stadium to Partizan’s rundown ground – not a stroll for the timid on Belgrade derby day. Since the break-up of Yugoslavia, and the lack of Croatian opponents, the Vechiti (‘Eternal’) Derby is the only show in town. Partizan and Red Star were formed in 1945 as Tito took over post-war Yugoslavia, and have been influenced by Serbia’s many upheavals since.

Behind Partizan were war heroes and hard-line Communists from the Yugoslav Army, the JNA – originally Tito’s Partisans.

Key to the new club’s immediate success was Budapest-born coach Illes Spitz, a star forward for Ujpest before the war. Here he could call on the best players in the new republic, Zagreb-born Stjepan Bobek and Cik Cajkovski. Bobek became all-time top scorer for club and country, Cajkovski the coach who would nurture Beckenbauer at Bayern.

Winners of the inaugural Yugoslav league in 1946-47, Partizan built their own JNA Stadium where defunct Belgrade SK once played. 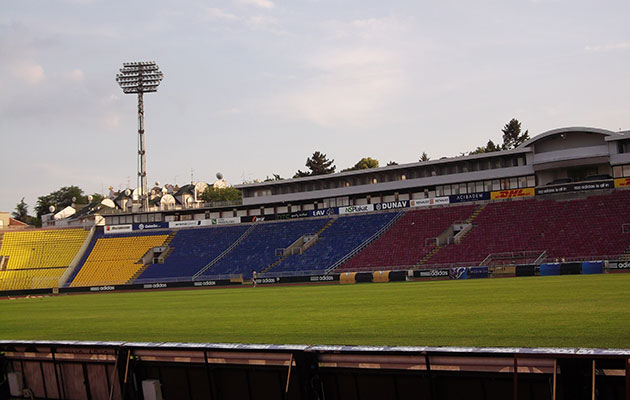 It was also the de facto national stadium, a tradition that continued in 1949, even before the rebuild was ready. It was here that Yugoslavia drew with France 1-1, bringing them a step closer to the 1950 World Cup.

Parades, internationals, cup finals, they all took place here after the stadium was officially opened on Army Day in 1951.

Joined by Milos Milutinovic and Branko Zebec, Partizan were invited to compete in the inaugural European Cup in 1955. Pitted against Sporting Lisbon of dictatorial right-wing Portugal, staunchly Titoist Partizan avoided a diplomatic spat and played the tie – setting the internationalist tone for the next 60 years.

The next great Partizan side, now sporting black-and-white stripes, came in the 1960s. Still under Spitz, players such as Velibor Vasovic, Fahrudin Jusufi and Milan Galic emerged to claim four titles and a place in the European Cup Final of 1966. Overcoming Manchester United in the semi, a poignant return to Belgrade for Bobby Charlton after the fateful flight of 1958 that crashed at Munich, Partizan briefly led Real Madrid in Brussels, only to lose 2-1.

Partizan’s stars fled abroad, Vasovic for Cruyff’s Ajax. After fallow years, youngsters Zvonko Zivkokic, Nenad Stojkovic and Dragan Mance came through. The genial Mance is remembered for his goal in a 4-0 turnaround that beat QPR in the 1984-85 UEFA Cup – and for his early death. Partizan picked up more titles, but only really came into their own in the 1990s.

Partizan bought their stadium from the Army in 1989 but modernisation has been slow and piecemeal. Current capacity is just short of 33,000, and the surrounding statuary, garden and parkland still lend a feel of yesteryear – as does the old-school Restoran Partizan, and offices for other sports clubs ringing the stadium.

Without the top sides from Croatia, Slovenia or Bosnia, or top players from European champions Red Star, Partizan monopolised the weaker Serb-Montenegrin league.

Given the later NATO bombing of Belgrade, hyperinflation and Serbia’s pariah status under leader Slobodan Milosevic, it is no wonder that support for either club became more radical. Many of those storming parliament in 2000 to overthrow the dictator were hard-core fans of either club. A week later there was little solidarity on offer on derby day – only a mass fight that spilled onto the pitch. Even as recently as April 2015, 35 police officers were injured and 41 fans were arrested as serious violence held up another ugly Red Star-Partizan clash – the game itself a drab 0-0 draw. 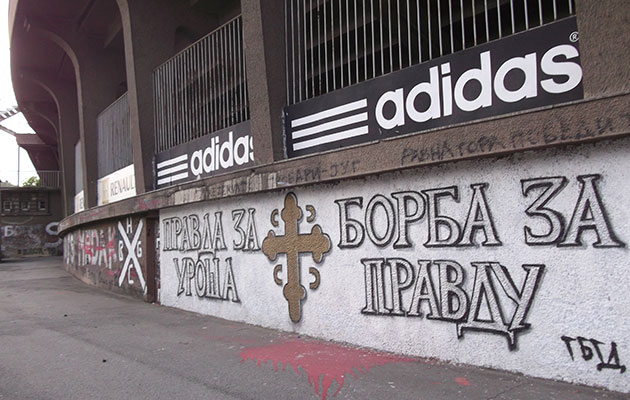 On the pitch, Partizan won six titles in ten years, the first with Predrag Mijatovic. But their stars, including Mijatovic, Savo Milosevic and, later, Mateja Kezman, headed abroad.

Later, Partizan brought in Lothar Matthaus to lead the club to the 2003-04 Champions League group stage. Knocking out Newcastle on penalties to get there, Partizan gave creditable performances against Jose Mourinho’s Porto, Didier Drogba’s Marseille and Real Madrid of the Galactico era.

More penalty drama in 2010-11 saw Partizan again progress to the group stage, under Aleksandar Stanojevic. The popular young ex-Partizan defender had just overseen an exciting and successful title finish, bringing through teenage prodigy Lazar Markovic – but Europe proved too much.

Now, with mainstay captain Sasha Ilic in the twilight of his career, Partizan are struggling to defend the title they won in 2015.

The stadium is divided into four areas, north (sever) and south (jug) behind each goal, east (istok) and west (zapad) along the sidelines. 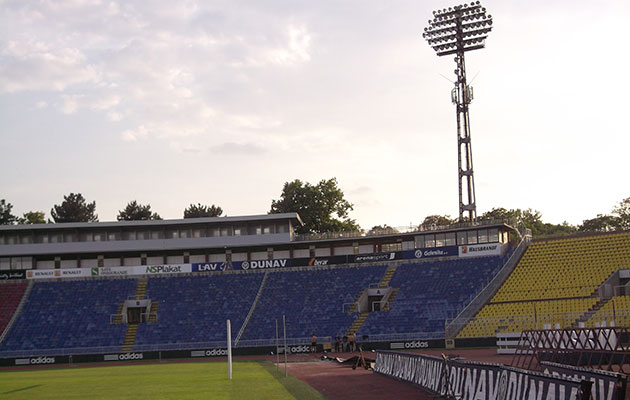 The south stand is the home of Partizan’s faithful Grobari, the Gravediggers. Depending on numbers, away fans are given most of the north, sever, stand.

The stadium lies between two main roads. On one side, trolleybus Nos.40 and 41 run along Bulevar kneza Aleksandra Karadjordjevica, to the stop named ‘Stadion Partizan’. Beforehand, they call at the main Post Office (‘Glavna Poshta’) by the National Assembly, the No.41 setting off from downtown Studentski Trg. Bus No.34 only starts from local station Beograd-Centar close to Partizan.

On the other side, bus Nos.47, 48 and 78 trundle along Bulevar Oslobodjenja, past the junction of Trg Oslobodjenja, an equally short walk to the ground.

Bus No.78 runs directly from the train station to Trg Oslobodjenja – allow about 15min. No.47 runs from downtown Trg Slavije. Currently tram No.9, which usually serves this route, isn’t running. 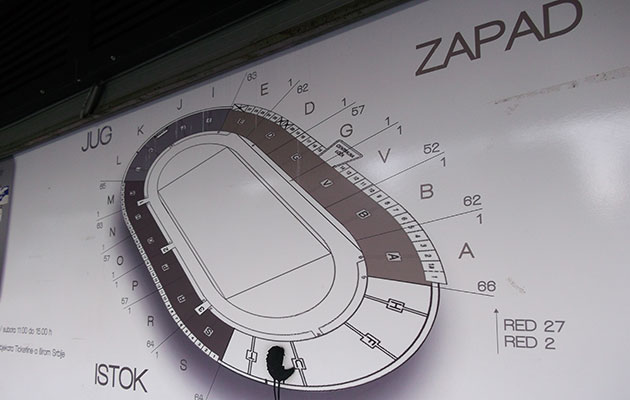 For a big European game, prices more than double.

As well as the ticket office (blagajna) at the stadium, for bigger matches such as the derby it’s worth trying another outlet at the Kombank Arena at Bulevar Arsenija Carnojevica 58, over the river in Novi Beograd.

The Crno Beli Butik, the Black & White Store by the stadium car park, offers tops, shirts and T-shirts in any colour you like – provided it’s black and white.

Two little bars sit by Trg Oslobodjenja at the junction with Dr Milutina Ivkovicha that leads to the ground. The Uzice and Maratona are old-school Yugo, with lovely old photos of Belgrade in the Maratona. 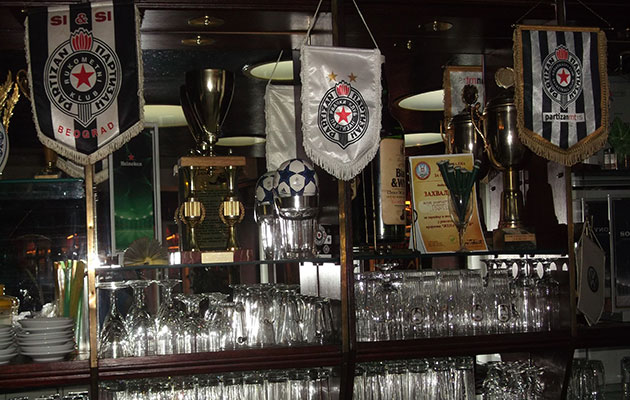 At the stadium itself, the classic spot is the Restoran Partizan by the small, enclosed garden and Partizan fountain. A two-floor operation little changed since Tito’s day, it comprises a restaurant downstairs and standard bar upstairs, with photos of various Partizan sports teams and Jelen beer at under RS150 a bottle.

Further round, past the club shop, Partizan’s archery club run a basic bar-kiosk, with tables conveniently set outside beneath Amstel umbrellas.