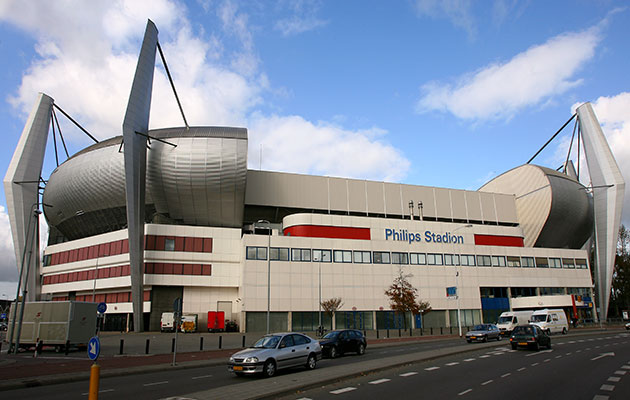 Eindhoven is one of 200 soccer cities featured in Libero, the digital travel guide for football fans. Regularly refreshed with new destinations and travelogues, Libero is a one-click treasure trove of football trip tips, tales and trivia. See www.liberoguide.com/eindhoven/ 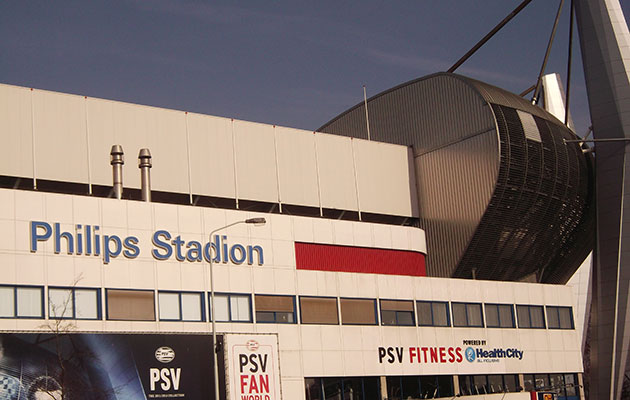 Runaway Dutch champions in 2015, PSV Eindhoven have spent their entire history based at the ground built by and named after the company behind them: Philips. As part of the club’s centenary events in 2013, a PSV Museum was opened, illustrating the remarkable story of a modest factory side that rose to become European Cup winners and 22-time Dutch champions. 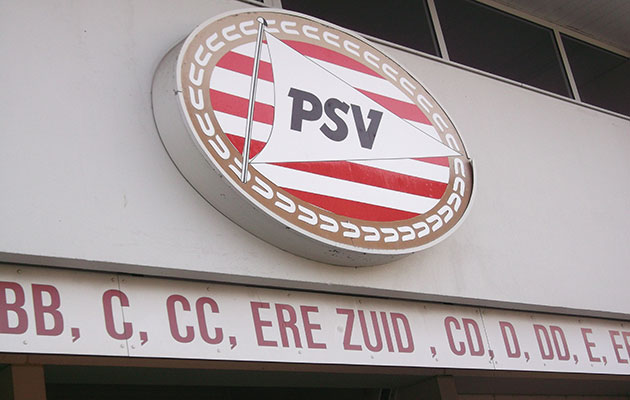 From basic works pitch to arguably the most comfortable football stadium in Europe – that’s the century-old story of the Philips Stadium. Not only are spectators sheltered by all-round roofing, they are warmed by stadium heating and ventilated by layers allowing in fresh air.

When this electrical goods company opened a simple playing field for employees in 1910, it was part of the so-called Philips Village (‘Philipsdorp’) of factories and housing. Today this is a short hop from Eindhoven train station, conveniently on the same route as a busy international airport. A century ago, this was the outskirts.

A works team, Philips Elftal, played friendlies here until, in 1913, Philips Sport Verenigeng were formed at a company dinner to celebrate 100 years of Dutch independence from Napoleon.

Around the time of World War I, the field became the Philips Sportpark and a stand was erected. A five-year-old Frits Philips, son of company co-founder Anton, was chosen to take part in the ceremonial kick-off. At the age of 100, this revered company director was still going to matches – in his regular seat in the crowd, not in the VIP lounge.

PSV, as they came to be known, moved into the Philips Sportpark. PSV were crowned champions in 1929, when the Dutch title was settled by regional play-offs.

Damaged in World War II, the stadium was renovated and expanded in the early 1950s, the running track later removed and capacity increased to 22,000 as European football beckoned.

PSV became Holland’s first club to appear in the European Cup. A consolation home win over Rapid Vienna in a dead rubber of a second leg was a somewhat inauspicious introduction for 8,000 fans to a new international era.

Floodlighting was installed, of course, by Philips. By the 1970s, with four stands installed, the Philips Stadium was attracting crowds of around 25,000 for the visits of Johan Cruyff’s Ajax, Wim van Hanegem’s Feyenoord, Real Madrid and Benfica.

Popular stalwarts such as Willy van der Kuijien and Coen Dillen, whose statues both stand outside the ground, kept PSV in the hunt. By the 1970s, with the arrival of ex-PSV player Kees Rijvers as coach, and the van der Kerkhof brothers on the pitch, PSV were no longer plucky challengers.

Thrice winning a strong Dutch league in the mid-1970s, PSV lost by a single goal two seasons running to an outstanding Saint-Etienne side in the European Cup – before winning the UEFA Cup in 1978. Ten years later, under Guus Hiddink, a side starring Ronald Koeman and Wim Kieft stormed the Dutch league and snuck through to win Europe’s premier trophy on penalties. 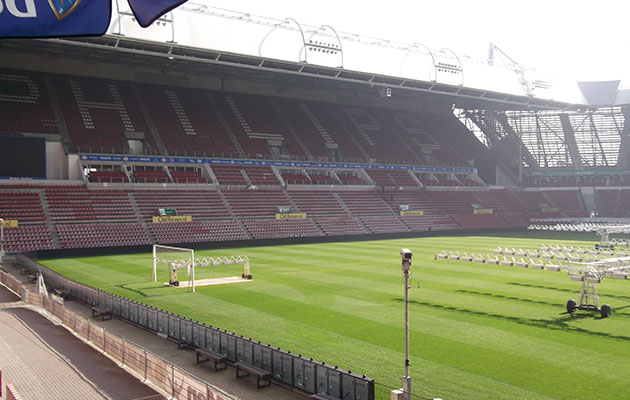 Three months later, Philips unveiled a modernised stadium with a curtain-raising friendly against Milan, PSV old boy Ruud Gullit and all. A month later, a farewell match was laid on here for Willy van der Kerkhof, who had been in both squads in each European triumph a decade apart.

On the eve of the Champions League, PSV were a major international force, with a gleaming stadium to prove it. With stars of the calibre of Ronaldo, Romario, Arjen Robben and Ruud van Nistelrooy, PSV won a dozen Dutch titles in 20 years – but never another European trophy.

The Philips Stadium became all-seated in preparation to host Euro 2000. Capacity reached 33,000. This was where Figo’s Portugal famously came back from 2-0 down to beat England 3-2. PSV were now a major international force, a fact reflected in the gleaming club offices, corporate boxes and dining outlets. Europe’s top football officials were entertained here for the UEFA Cup Final of 2006. 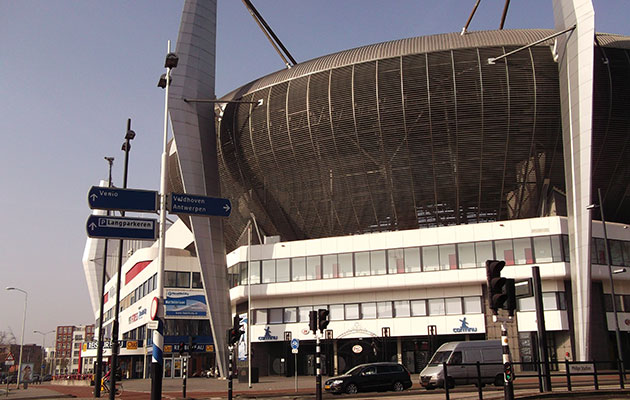 Meanwhile at PSV, the lucrative sale of key players helped balance the books – but hindered coaches of equal calibre, such as Dick Advocaat, Bobby Robson and a returning Guus Hiddink.

A wonderfully brave performance in the 2005 Champions League semi-final against Milan memorably brought Hiddink’s PSV within seconds of another European final.

Ten years later in 2015, Memphis Depay led PSV to a first title since 2008, then headed to Old Trafford in the close season. Luuk de Jong wasted little time in filling his boots, scoring twice in the curtain-raising Supercup game of 2015-16. 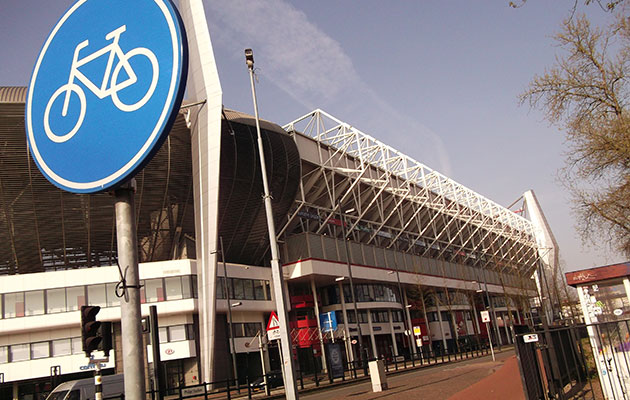 The stadium couldn’t be better located, with its own stop on the same bus line (No.401) that runs from the airport to the train station. From town, you can either walk ten minutes turning right from the station, past Media Markt up Mathildelaan, or take bus Nos.13, 14, 16, 18, 401 or 402, a six-minute journey.

As Dutch fans require a Club Card to attend most games, a package is the only practical way to see a game at PSV. The club makes it a policy to set aside a limited number of tickets for interested neutrals, foreign ones catered for with match packages. Simply fill out the application form on the club website . These may include European games too. These tickets can be picked up at the desk by gate 17 during the week (Mon-Thur 10am-6pm, Fri 10am-9pm, Sat 10am-5pm) or gate 16 on match days. Tickets are likely to be in the corners of the ground, with prime seats over the halfway line in the Noord or Zuid stands sold as part of ‘Gold’ packages. 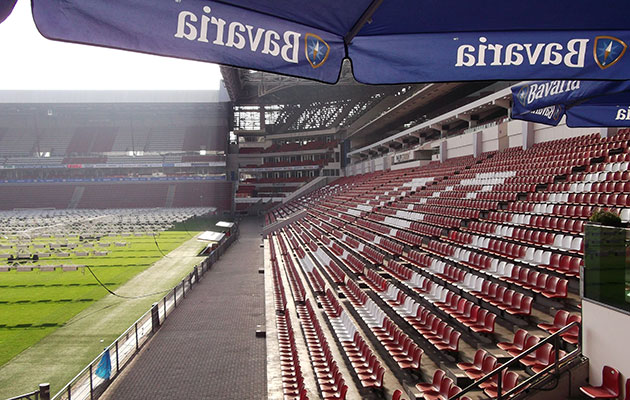 Home fans gather in the Oosttribune, or East Stand, away ones in corner sectors MM (gates 35/36) of the West. Seats are comfortable, covered and heated. The basic ‘Silver’ package for a standard league game is €56, including €31 for the club shop and food outlets. It’s €77.50 for games against Ajax, Feyenood and Twente. ‘Gold’ packages are twice the price. There is also a reservation fee of €15. Payment is made in advance by bank transfer – credit cards aren’t accepted. For all enquiries, phone +31 40 2 505 505, extension 9 or email ticketoffice@psv.nl.

Away supporters are allocated upper sector MM between the Noord and West stands, accessed through gates 35 and 36.

Opened by Willy van der Kuijien for the club’s centenary in August 2013, the PSV Museum covers the history of the club in entertaining detail. It can be visited as part of an English-language tour for groups of ten or over, booked through the club shop. 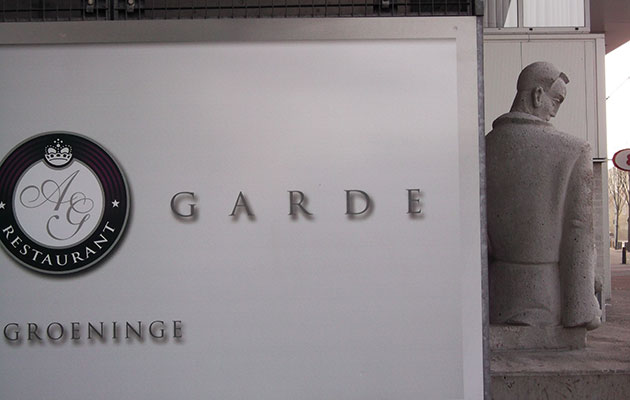 Of the bars and restaurants around the stadium, Avant Garde is an upscale eaterie, Coen & Willy (a reference to post-war stars Dillen and van der Kuijien also commemorated in statue form) is a popular match-day bar while the Sports Café & Lounge is for corporate guests. Pick of the bunch is de verlenging (‘Extra Time’), a large bar/restaurant decked out in images from PSV’s history. The bar leads to a VIP area of the ground where the match can be enjoyed over glasses of local Bavaria beer.

Just over the main road, De Aftrap is a supporters’ bar done out in colourful graffiti. 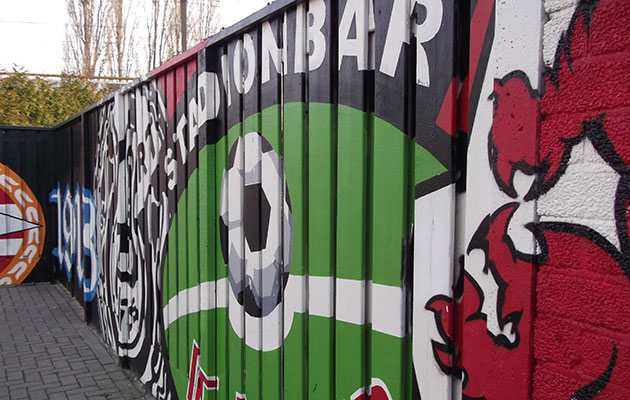