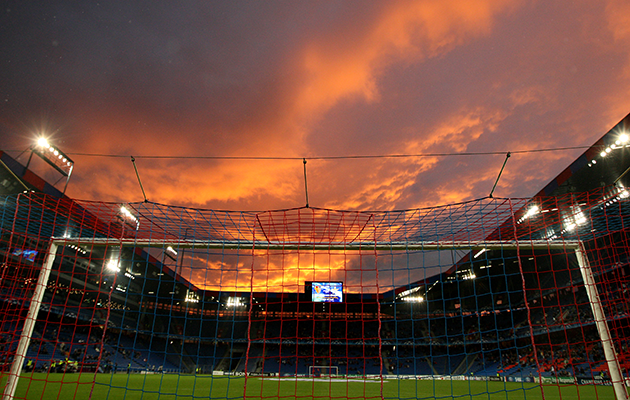 Basel is one of 200 soccer cities featured in Libero, the digital travel guide for football fans. Regularly refreshed with new destinations and travelogues, Libero is a one-click treasure trove of football trip tips, tales and trivia. See www.liberoguide.com/basel/

Basel may adjoin France and Germany but this Rhine river port is the hotbed of Swiss football. St Jakob Park, home of seven-time consecutive champions FC Basel and stage for the 2016 Europa League Final, has the country’s fieriest atmosphere.

This has been put to the test with home wins over Manchester United, Chelsea and Liverpool in the Champions League, and Tottenham, on penalties, in the Europa League. It was Chelsea, in fact, who then stopped FCB at the semi-final stage of that same tournament. 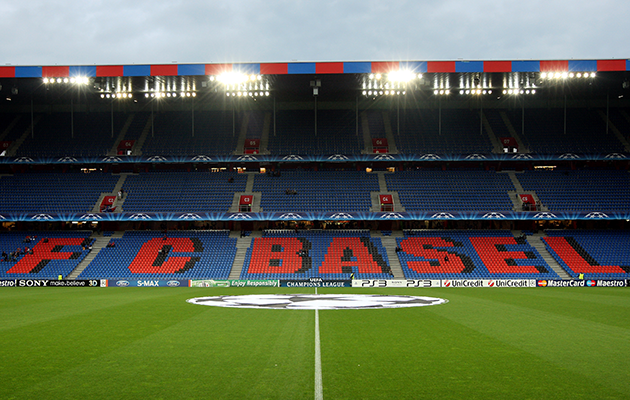 St Jakob Park, known to locals as ‘Joggeli’, was rebuilt Euro 2008. It staged the opening match and semi-final of Euro 2008, Germany’s dramatic 3-2 win over Turkey.

Four months later, Basel faced their historic cousins FC Barcelona in the Champions League, a crushing 5-0 defeat at the ‘Joggeli’ followed up with a creditable 1-1 draw at the Nou Camp against the champions-to-be.

The two clubs were formed by the same man, Johannes (‘Hans’) Kamper, a young Swiss entrepreneur. On November 12, 1893, he happened to see a classified ad in the ‘National-Zeitung’, placed by a certain Roland Geldner, asking for like-minded sporting locals to meet and discuss forming a local football club. The event would take place the following Wednesday, in the upper dining room of the Schuchmachern-Zunft restaurant at Freie Strasse 52.

In 1899, using the same tactic, Gamper placed an ad in ‘Los Deportes’, asking for interested parties to form a football club.

Adopting the red-and-blue of FC Basel, FC Barcelona were formed soon afterwards, Gamper scoring more than 100 goals during the four years he played for them.

Back home, Basel didn’t really take off until the 1960s, becoming a regular on the European circuit by the 1970s.

Originally Basel played on the other side of the Rhine, at the Landhof Sportplatz. The St Jakob stadium was built for the 1954 World Cup, seeing 44 goals in six games. These included Hungary’s ominous 8-3 thrashing of West Germany, and the host nation dumping Italy out of the competition, 4-1.

With two goals in the last five minutes, and two from local boy Seppe Hügi, this was the game that established the Joggeli’s credentials as a proper football ground. Such crowd scenes had never been seen before in sleepy Switzerland.

The St Jakob Park is two miles south-east of the city centre, part of a shopping complex and opposite a group of sports halls and arenas. Today’s stadium is not the St Jakob of elegant 1950s design built for the 1954 World Cup, but a late 1990s rebuild, inaugurated in 2001, for Euro 2008. 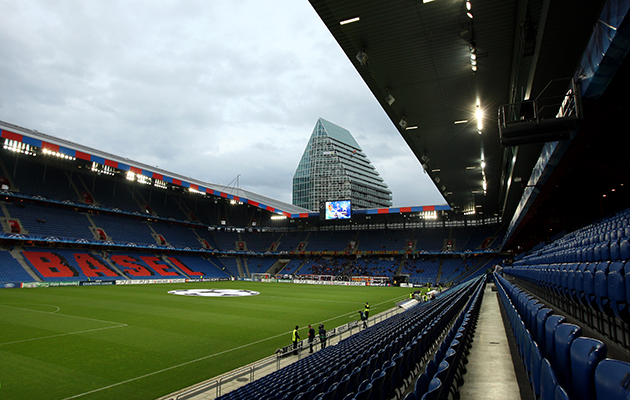 FC Basel’s first home was Der Landhof, part pitch, part velodrome, on the other side of the Rhine, also used for events such as the visit of cowboy Buffalo Bill. Though moving to the Joggeli after 1954, FCB still played matches at Der Landhof until 1967.

Set beside a railway line on one side and the St Alban stream on another, there was little room for expansion when Basel was awarded hosting rights for Euro 2008. The solution was to rebuild. 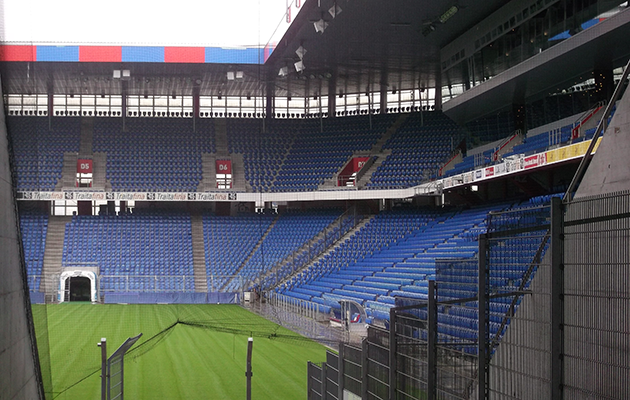 Carried out by Basel-based architects Herzog & De Meuron, of Tate Modern and Allianz Arena fame, this reconstruction cost some 220 million Swiss francs and also created a three-floor retail complex of some 30 shops.

While capacity for Euro 2008 was 42,500, seats were later removed to provide more spectator comfort, reducing the maximum accommodation to 38,500. Considering the huge numbers expected to be heading from Liverpool, the wisdom of holding the 2016 Europa League Final at such a relatively small arena has been questioned. 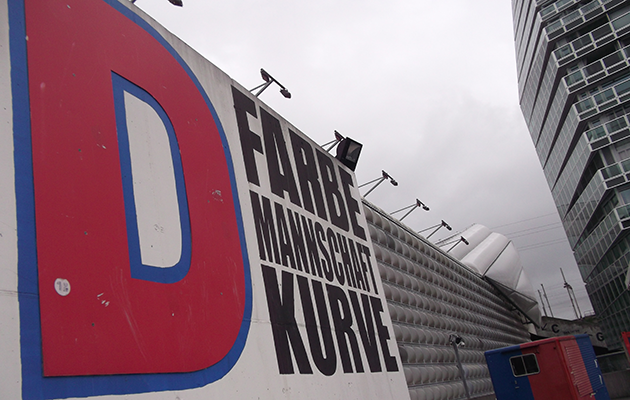 Joggeli comprises four stands, lettered A-D, A being the main stand with the best seats, and bars and restaurants behind it. Stands B and FC Basel home end D are behind the goals. 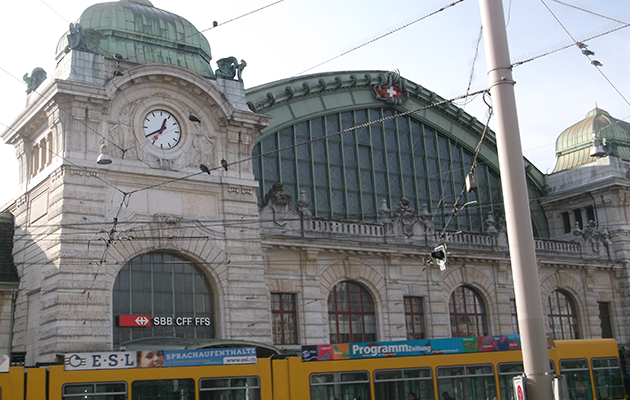 German trains use Basel Bad station, on the other side of the Rhine. Officially you’re crossing the border when you walk from the station concourse to the platform, where Deutsche Bahn trains run as part of the German network.

Basel city transport consists of trams and buses. A day pass is SF9 but local hotels provide a Mobility Ticket, offering checking-in guests free use of public transport for the length of their stay. 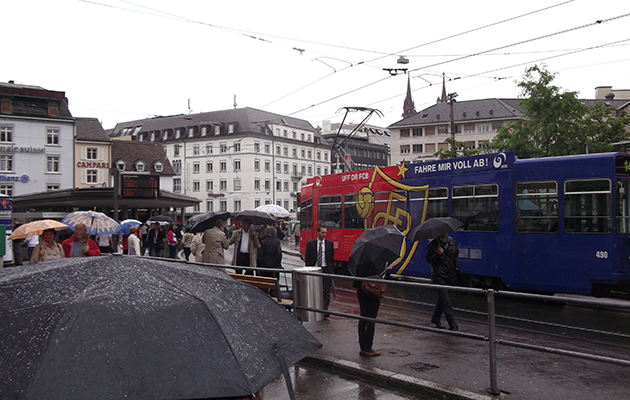 The St Jakob has its own train station behind Stand C, with a regular direct connection (8min) with Basel SBB station on match days only.

Regular transport is provided by tram No.14 (direction Pratteln) that runs every 7min from downtown Barfusserplatz eight stops away. It also passes through Aeschenplatz, linked by tram No.15 to the station. Allow 10-12min from town. The tram drops you right by Main Stand A.

For domestic fixtures, there’s a ticket office (Mon-Fri 9.30am-6.30pm, Sat 9am-6pm) at the back of the club shop behind Stand A, as well as distribution through the more modest souvenir outlet near the train station, the Fanshop Markus Vogel (Küchengasse 16; Tue-Fri 11am-6.30pm, Sat 10am-5pm).

For league games, the best seats in Stand A are SF65-75, while a decent spot in Stand C opposite is SF48-59. Tickets behind the goals, and in the away sector are SF25. 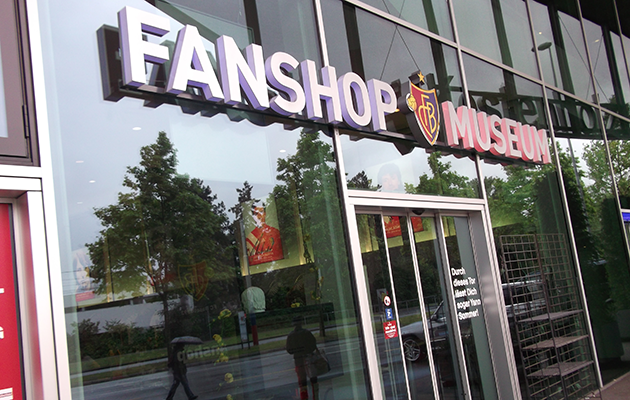 Behind Stand A, the FC Basel Shop (Mon-Fri 9.30am-6.30pm, Sat 9am-6pm, match days) stocks a weird array of souvenirs, from doormats to FCB-branded condoms. In an underpass near the station, the Fanshop Markus Vogel (see above) offers a more modest selection.

At the back of the main store is a ticket office, beside which is a discreet FCB Museum. Among the artefacts in a handful of display cases is a photo of the teams before Basel took on the great Uruguay side, Olympic champions in 1924. 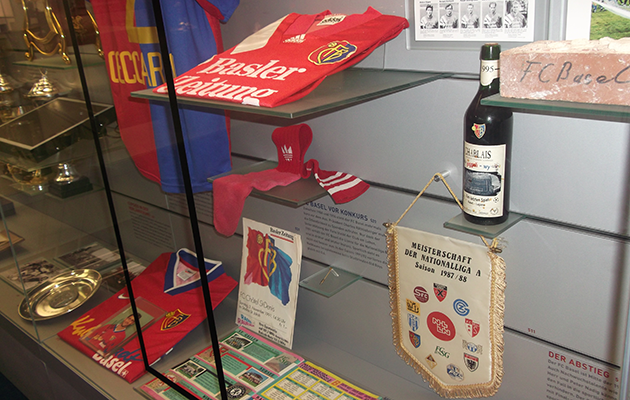 The only venue near the ground is the Wirthaus St Jakob (St Jakobs-Strasse 377), a traditional restaurant that has been serving guests since 1526. Closed on Sundays, it comprises a terrace and several rooms, the main one displaying historic images of the city. It’s beside the stadium, diagonally across from the tramstop. 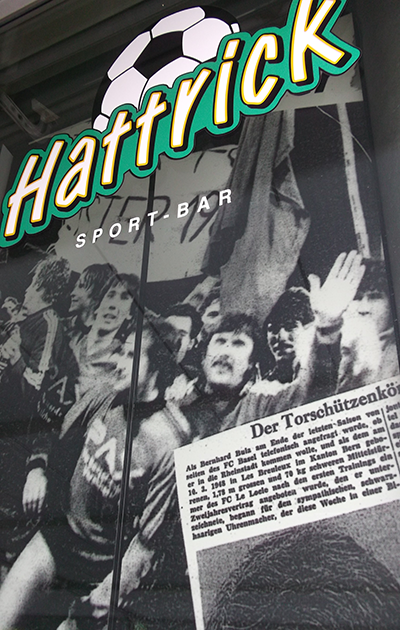 At the stadium, behind Stand A, are standard Italian Restaurant Uno and, close by, the Hattrick Sport Bar. Decorated with old newspaper cuttings outside, tasteful football iconography, sundry Americana and ‘Hopp Schwiiz’ scarves inside, Hattrick should cater to most needs. In a large bar-room centrepieced by an equally large island bar, the menfolk can lay into big burgers and Schlossgold beers while kids get their own menu and a table football table.