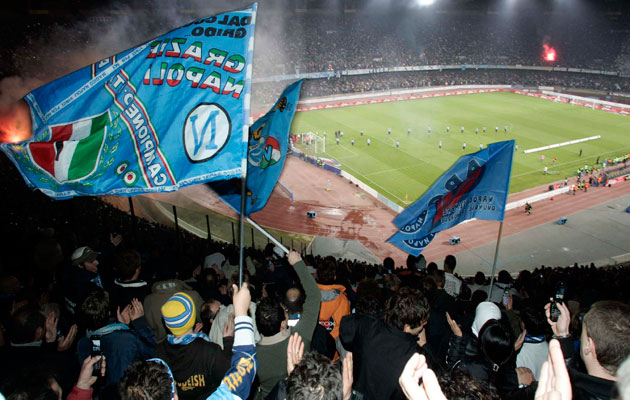 Naples is one of 125 soccer cities featured in Libero, the digital travel guide for football fans. Regularly refreshed with new destinations and the travelogue Soccer Sagas, Libero is a one-click treasure trove of football trip tips, tales and trivia. See www.liberoguide.com.

If ever there was a one-club city, it’s Naples. Everywhere you look there’s a light-blue shirt or a badge with a big ‘N’ on it. No, Maradona hasn’t returned – well, only to answer to the tax authorities – SSC Napoli are enjoying their best spell since Diego in his pomp memorably took them to two titles almost single-handedly. 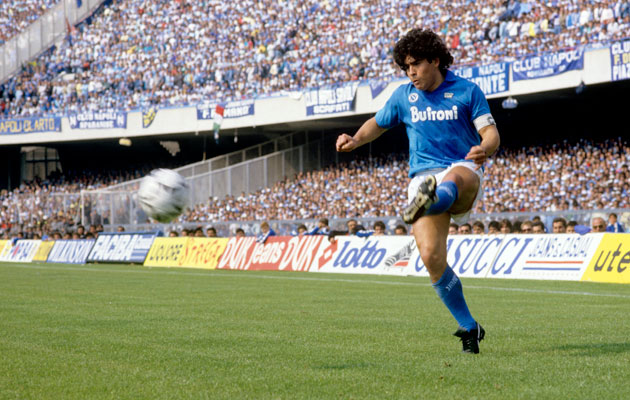 Diego Maradona in action for Napoli, with whom he won two league titles.

With regular Champions League football, Napoli are now a semi away from their first European final since 1989. Napoli have bounced back from bankruptcy and Serie C1 football to challenge the best.

Diego might have flown into Napoli’s San Paolo stadium by helicopter in 1984, but football came to Naples by way of the sea. Cunard sailor William Poths helped set up the Naples Football & Cricket Club (later Naples FC) in the early 1900s.

In their early years, the original Naples FC played at via Campegna in Fuorigrotta west of town, before moving to nearby Agnano, both in the same vicinity as today’s San Paolo Stadium. A club known as Internaples were based at Bagnano, also close by. After 1926, industrialist Giorgio Ascarelli took over a newly merged club. Ascarelli both convinced the Italian football authorities to form one national league and built the first proper football stadium in Naples, just east of the train station, close to today’s Gianturco metro station.

Opened, bizarrely, two weeks before Ascarelli’s death, the Stadio Vesuvio quickly took his name. By the time it staged two poorly attended matches in the 1934 World Cup, the stadium had been renamed Partenopeo by the Fascist authorities. Allied bombing later destroyed it.

Napoli duly moved to Vomero, and the Stadio Arturo Collana, named after a prominent local sports journalist, on piazza Quattro Giornate, named after an uprising against Nazi occupation. Temporarily converted into a concentration camp for locals before being sent to Germany, hence the uprising, the stadium had been briefly used by Napoli while the Ascarelli was being revamped for the 1934 World Cup.

Still a sports ground today, it served Napoli until the San Paolo was opened in 1959. Shipping magnate Achille Lauro, twice club president, galvanised the project and brought star names to Napoli, though none bigger than Maradona 30 years later. 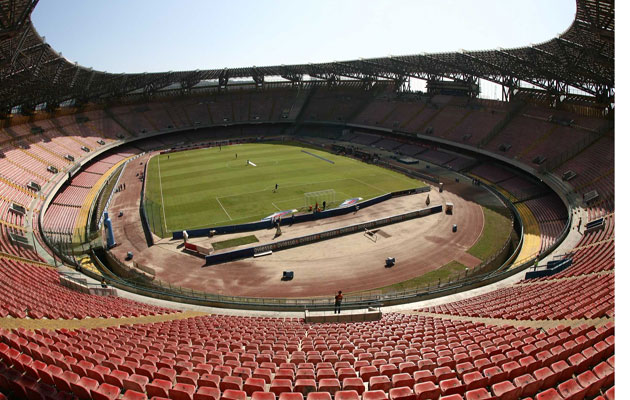 Opened with a match between Napoli and Juventus in December 1959, the huge, two-tier bowl of San Paolo was built in an area of toxic gases and extinct volcanoes known as Campi Flegrei.

Holding 85,000, the San Paolo had to be modified for Italia ’90 just as it was regularly packed to the rafters for the Diego show. Fabrizio Cocchia, son of original architect Carlo, was charged with the revamp.

Cocchia Jr kept the running track and the large capacity by altering the angle of the lower tier. A roof was added, lifted over the stands to allow a view of the hills beyond. A funeral hush becalmed the bowl when Roberto Donadoni, wearing the unlucky No.17 shirt, sank to his knees after missing the fateful penalty for Maradona’s Argentina to beat Italy in the subsequent World Cup semi-final.

The capacity of 86,000 was reduced to the current 60,000 following a terrible storm in 2001 that caused considerable damage and forced Napoli to play a number of home games elsewhere. Necessary improvements followed but a much-criticised pitch remains in place.

More ambitious plans were shelved with Italy’s failed bids to host the Euros, although LED screens were installed in 2012, replacing the video ones that broadcast Donadoni’s dramatic misery 22 years previously. 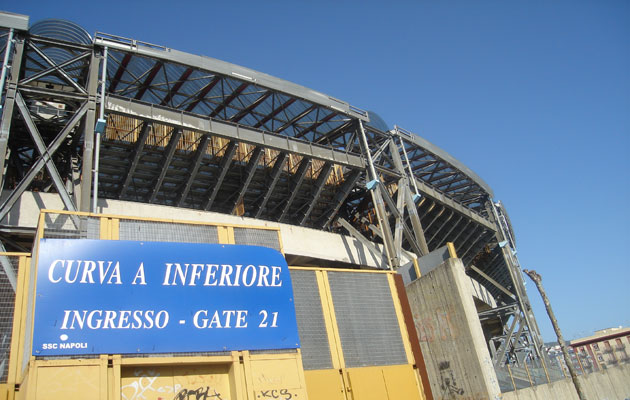 The San Paolo comprises two sweeping ends, home Curva A and home Curva B, with Napoli ultras in each. Away fans in the Settore Ospiti squeezed between B with the main Tribuna Posillipo. Opposite, the Distinti stand along the sidelines allows for comfortable gawping at the pageantry at each end.

The nearest station, Mostra, only serves the Cumana train that heads further west and short line 6 from Mergellina. Campi Flegrei, a 10min walk to the stadium across palm-lined piazzale Tecchio, is directly linked to Garibaldi (Napoli Centrale) six stops away. At the main station, head down to the lower level, and platforms No.4 for Line 2/direction Pozzuoli-Bagnoli-Formia (every 10-15mins) at the far end. A newsagent alongside sells Unico Napoli single/day tickets but they don’t fit in the old stamping machines. It’s a 15min journey, mainly through tunnels.

The most useful of the many buses that otherwise serve mainly Pozzuoli is the R7 from piazza Vittoria and the No.151 from Garibaldi – but allow bags of time for traffic. 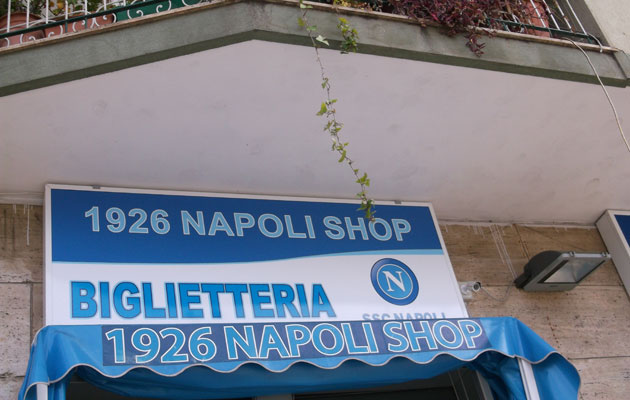 There are now a couple of ticket outlets near the stadium: Blu Point Sport (Mon-Sat 9.30am-1.30pm, 4pm-8pm) beside the Caffeteria degli Azzurri (via Giambattista Marino 15A); and the 1926 Napoli Shop (piazza Gabriele D’Annunzio 32; Mon-Sat 10am-1pm, 4pm-8pm) at the back of the stadium. In town, tickets are sold at an agency in the elegant Galleria Umberto I arcade, No.17, behind the Royal Palace. 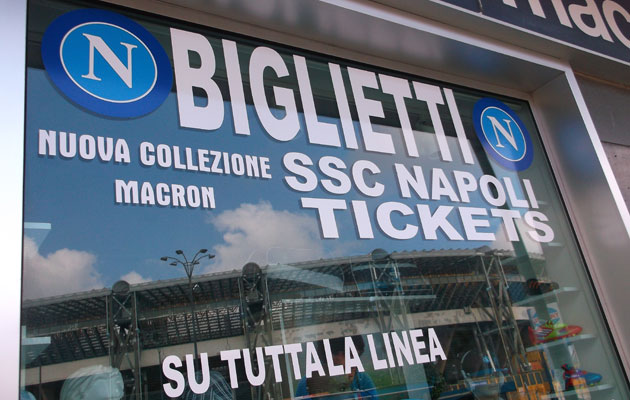 On match days until lunchtime, one of the bunker-like botteghini (usually No.3) opens for sales on the via Tansillo side of the stadium. In all cases, you’ll need ID to buy tickets.

Average prices run from €18 in the Curva A/B to €75 in the Tribuna Posillipo. A spot in the Distinti for €40 allows for comfort and a good view of the action on and off the pitch.

A commercial push has seen Napoli outlets open in the middle of the main train station (Mon-Sat 8am-10pm), in front of the platforms, at the port (Mon-Sat 8am-7/8pm) behind the ferry ticket offices and at the airport (Mon-Sat 7am-9.30pm). 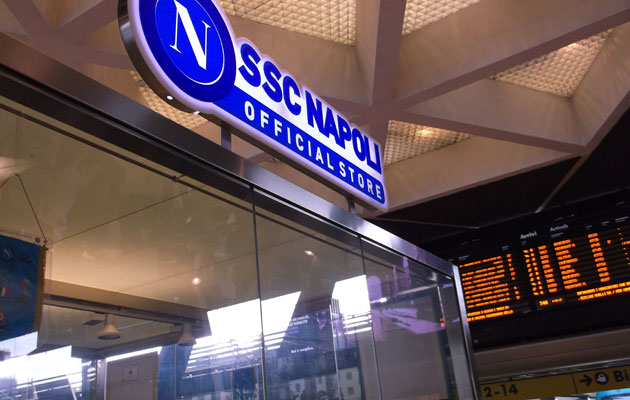 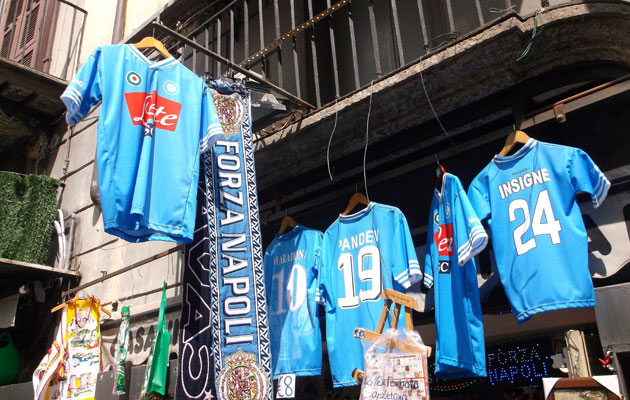 Kiosk bars dot piazzale Tecchio, the most convivial the terrace Caffe Cumana by Mostra station. Corner Santos (Tecchio 105) is a shiny grand café while further up, the equally sleek Caffeteria degli Azzurri (via Giambattista Marino 15A) bristles with Napoli paraphernalia such as a Maradona ashtray, Cavani loveheart and Cannavaro moped. 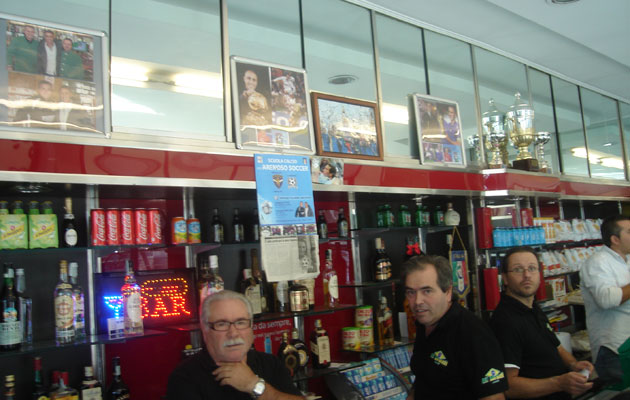 Nearby Bar Azzurro (via Tansillo 52) displays a poignant photo of Diego bidding farewell. Best choice, corner Caffetteria Monnalisa (piazza D’Annunzio 48) has a back bar plastered in Kodak images of the barman with sundry stars (Lippi, Cannavaro, Nedved) and a bar counter buzzing with football talk between staff and regulars.