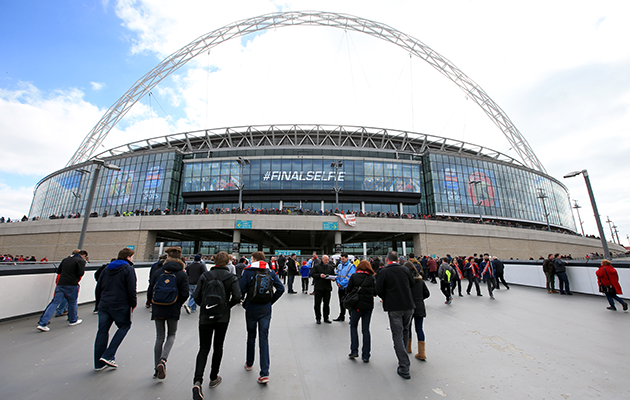 Wembley, named after the distant north-west neighborhood it is located in, now sports a 134-metre high arch, the world’s largest single-span roof structure, visible for many miles around.

It was not quick in coming. Originally, the old Wembley – of the famous twin towers, the inaugural ‘White Horse’ Cup Final of 1923, the Matthews Final of 1953, the World Cup Final of 1966 and no fewer than six European Cup finals – was due to be demolished after Germany beat England there in October 2000.

After two years of bureaucratic and financial wrangling, demolition eventually began in September 2002. Spiraling costs helped cause delay after delay while cup finals were moved to the Millennium Stadium in Cardiff, and England international matches were played around the country. 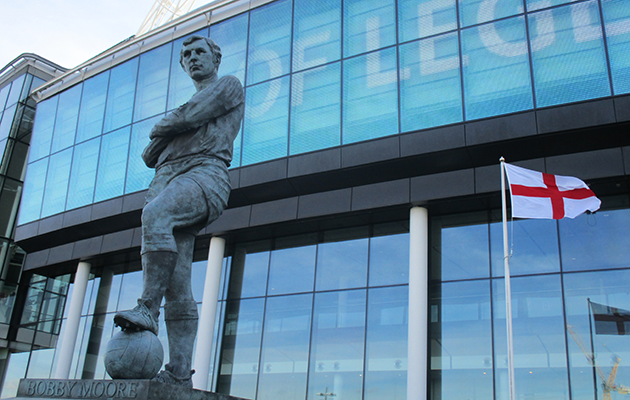 A 2006 opening date was then pushed back another year. Eventually, its relandscaped Wembley Way now fronted by the imposing figure of Bobby Moore, the new Wembley hosted the FA Cup final of 2007.

Admired for its innovation – as well as the arch, the new arena featured a sliding roof – Wembley came under fire for its poor pitch, relaid several times.

The turf currently used is semi-artificial.

Welcoming back the England national side and annual League and FA Cup Finals, the 90,000-capacity Wembley hosted the Champions League Finals of 2011 and 2013. It has also been selected to host the semi-finals and final of Euro 2020.

In 2016-17, Wembley stages Tottenham’s home games in the Champions League before both Spurs and Chelsea become unlikely bedfellows at the stadium in 2017-18. Chelsea’s stay is scheduled for three seasons. 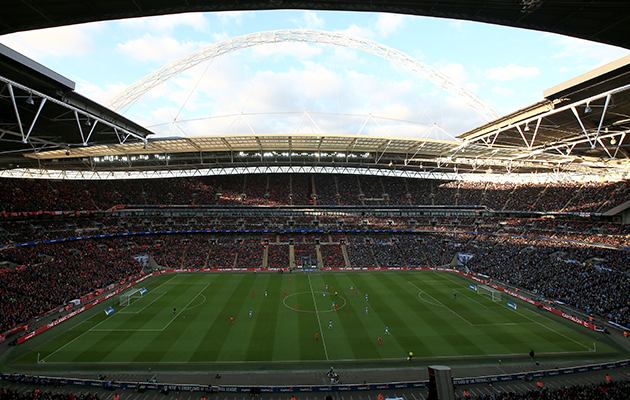 The stadium comprises three levels, with the cheapest seats (sectors numbered 501-552) around top Level 3. South and North Stands contain the dearest seats over the halfway line; the East and West Stands are behind each goal.

Entrances are lettered A-P (no I), with J-N for the West Stand, B-F the East Stand. G-H are for the North Stand, with its Bobby Moore statue, A and P for the South Stand. Level 2 (201-252), lined with upscale bars and restaurants, is allocated to Club Wembley members. Level 1 (101-144) is nearest the pitch. 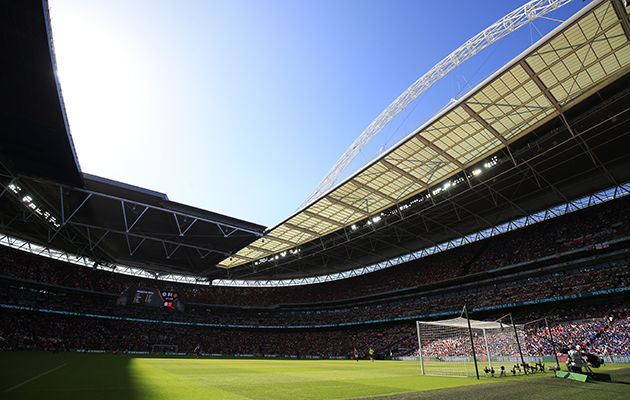 For England internationals, tickets are distributed through the FA. Some tickets are set aside for the official England Fans Club, but if you register with the FA, you’re entitled to buy as part of the public sale. Typical prices for an international begin at £20 for the upper East End, £35 for the upper West End, and £45-£65 in the main stands. For play-offs, finals etc, check with individual participating clubs or Wembley at +44 844 980 0038, sales@wembleystadium.com. 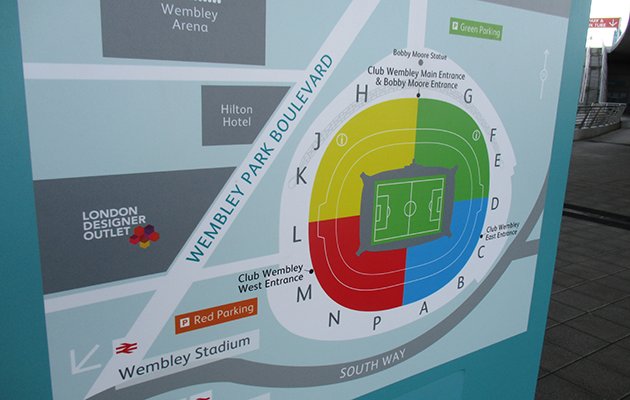 There are three main stations that serve Wembley: Wembley Park (Jubilee and Metropolitan lines), closest to the North Stand up Wembley Way; Wembley Central (Bakerloo, overground rail), 15-min walk up the High Road and left to White Horse Bridge and the stadium’s south-west corner; and, the closest, Wembley Stadium station (trains from Marylebone). 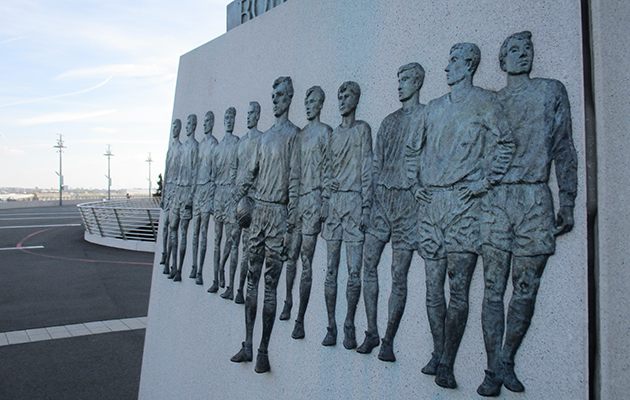 The Stadium Store (Mon-Sat 10am-5pm, Sun 11am-5pm, match days vary) is set by the East Ticket Office on Level B1 of the North Stand, accessed through the main reception. Stocking mainly England gear, it also offers Wembley chocolate, sweet and sticks of rock, DVDs of great Wembley finals, guides to the stadium in four languages, pewter models of Bobby Moore and a 1966 World Cup Memorabilia Pack with replicas of the final progamme, ticket and the ‘Daily Express’ from the following day.

Entertaining 75-min tours begin, inevitably, with 1966, and football’s most infamous crossbar. The one struck by Geoff Hurst to score England’s third goal in the World Cup Final stands over the entrance to the Crossbar Reception area – with a life-size if not lifelike Hans Tilkowski reaching up for an invisible ball. Models of the original stadium with its Twin Towers and the ’66-era World Cup, and a Geoff Hurst shirt, complete the picture. 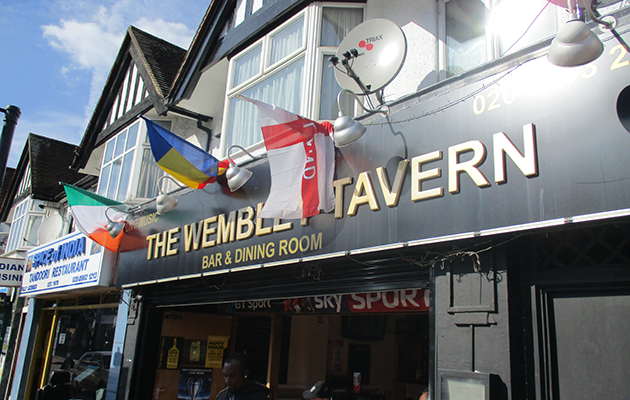 Stats are thrown out as you tour the arena: 2,600 toilets, nine restaurants including the largest in the Bobby Moore Club, and how much Roman Abramovich paid for a decade of matches in the prime seats. All is brought to life as you head down the tunnel on to the pitch – the mood set by a short video of star teams standing exactly where you are. Then it’s a clatter up the 107 stairs to be photographed holding (but not lifting) a replica FA Cup – pick up your photo afterwards for £10 (£5 for additional prints). 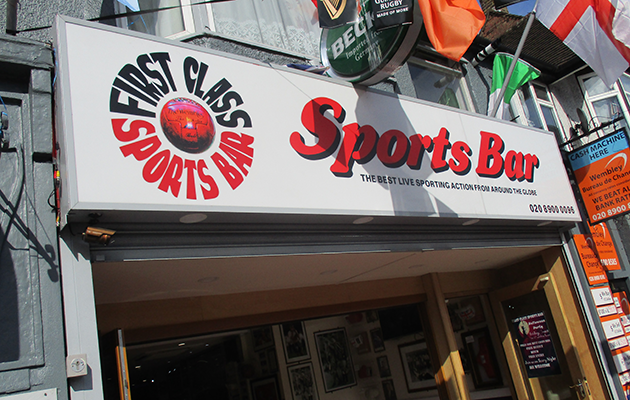 The main clutch of pubs can be found near Wembley Park tube, on a busy triangle of businesses on Wembley Park Drive just past Wealdstone Brook. Next to each other are the somewhat quickly knocked together First Class Sports Bar (No.125), with its signed memorabilia, and the equally functional Wembley Tavern at No.121. 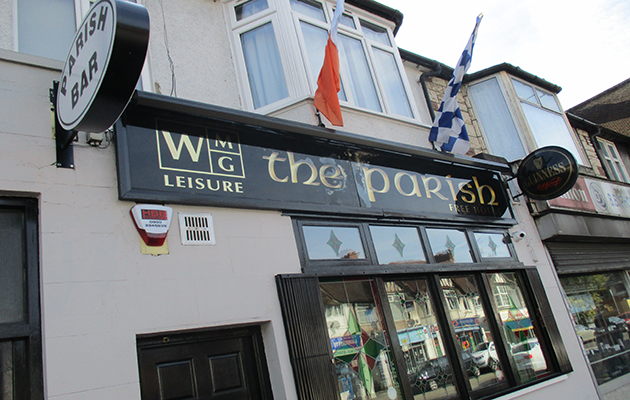 Nearby are the Parish (No.120), a friendly cubbyhole of a pub with Guinness and TV sports as the focus, and the more prominent Watkins Folly, opened in 2012, with live music and a beer garden. It occupies the corner where Wembley Park Drive meets Empire Way, along which outlets are few and far between given the opening of shopping and leisure hub the London Designer Outlet next to the stadium.

If you’re after a proper pub, it’s a stiff little climb to the historic Green Man on Dagmar Avenue, but it has an ample beer garden and a selection of Wembley photos, both sporting (Henry Cooper and Clay, Osgood and 1970) and otherwise (Madonna, Freddie Mercury).