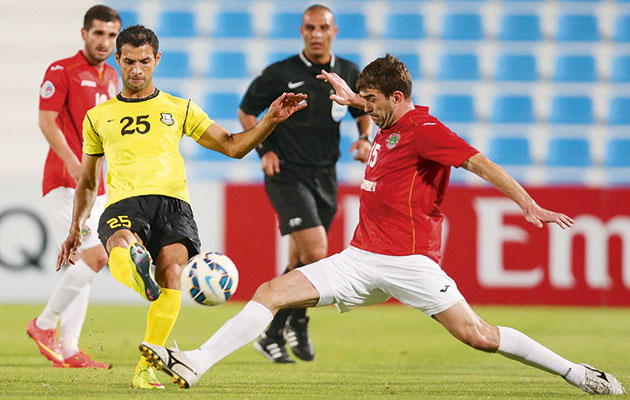 Tajikistan may have been eliminated from the 2018 World Cup qualifiers with two matches to go, but a place in the 2019 Asian Cup is still very much within their reach.

Regardless of results in the remaining qualifiers, Mubin Ergashev’s side can qualify for the continental finals in the UAE via the play-offs, despite setting out with limited ambitions.

Ergashev took on the job in July 2015, after former Russia striker Mukhsin Mukhamadiev was sacked, and was the obvious replacement following his success in charge of Tajik champions Istiklol.

Before independence in 1991, CSKA Pamir Dushanbe spent three seasons in the Soviet top flight – the only Tajik club to have played at that level – but they have long since been replaced by Istiklol as the dominant local team.

Istiklol were only formed in 2007, but they won the AFC President’s Cup in 2012 and recently retained the domestic championship – their fourth league title since 2010.

Istiklol also reached the final of the 2015 AFC Cup. Despite losing to Malaysian club Johor Darul Ta’zim, just getting there was a fillip for the Tajik game, which is struggling to keep pace with neighbouring countries.

Before teaming up with his old boss in the national set-up, Nikola Lazarevic was Ergashev’s assistant at Istiklol and he believes the club’s domination will help raise standards.

“Tajikistan is not a rich country and the conditions in football are at low level,” says the Serb. “But the federation and Istiklol are doing their best to take it higher.”

With the president of the Tajikistan Football Federation, Emomali Rustam, controlling the club and his father, Emomali Rahmon, the country’s president for two decades, Istiklol’s dominance should come as no surprise.

The nation’s best-supported club, with the biggest budget, Istiklol’s squad is full of national team players, plus imports from Spain, Ukraine and Serbia.

To compete, other clubs are forced to look overseas.

The lack of a common language has stopped agents from South East Asia penetrating the country, but their counterparts from Eastern Europe do operate there. However, clubs without Istiklol’s budget are also recruiting from

Africa and this is not helping playing standards, according to former national coach Kemal Alispahic, an itinerant Bosnian who managed Tajikistan in 2012 and returned to lead the Olympic team in 2014.

“In Istiklol, there are players with greater knowledge and experience,
but nothing special”

“They are players who cost little and do not have good football knowledge,” admits Alispahic. “In Istiklol, there are players with greater knowledge and experience, but nothing special.”

For non-Russian speakers, it can be a lonely existence in what UNICEF says is the poorest country in central Eastern Europe.

“Players are full time, though most of them are barely scraping by,” says Troy Ready, who first played in the country in 2005.

The former Portland Timbers midfielder was an unlikely import. After playing for an all-star side called Ambassadors in the 2005 Friendship Cup that also featured Tajikistan, the country’s Olympic side and Afghanistan, Ready returned in 2009.

He spent four seasons in Kurganteppa playing for Vakhsh and found basic issues. “Facilities are definitely a problem, equipment also is sparse,” says the 35-year-old, who now works on the Timbers’ coaching staff. “With lack of finances available for coaches and players there are also challenges in terms of the quality of instruction for players.”

Alispahic, whose assistant in the national set-up was Ergashev, agrees. “I could see all the problems they were facing,” he says. “But they have many talented kids and I believe that, with the improvement of infrastructure, better days for football will come.”