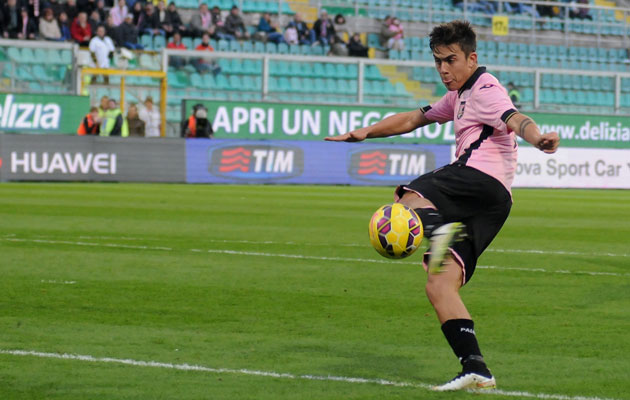 On Friday, we posed a number of questions about the forthcoming weekend of football….

• How much is Paulo Dybala worth?
On Friday we asked if Paulo Dybal was worth the 40million euro price tag placed on his head by Palermo owner Maurizio Zamparini.

The Argentine striker, dubbed the new Sergio Aguero, did his valuation no harm on Saturday, tucking away his side’s goal in the 1-1 draw with Roma.

The latest reports suggest that Palermo are willing to talk to Manchester United about a move for Dybala. One thing’s for sure, should he become available, there will be no shortage of interest in the increasingly impressive 21-year-old.

• Are Verona heading for another thrashing?
After going down 6-1 to Juventus in the Italian Cup last week, the Gialloblu returned to Turin on Sunday – this time to face a full-strength side. Could Andrea Mandorlini’s side improve their defensive solidity against the Serie a leaders?

The answer was: not really. Two goals from Carlos Tevez along with goals from Paul Oogba and Roberto Pereyra ensured it was another miserable journey home for the travelling fans.

• Will Barcelona ever have a settled line-up?
Luis Enrique changed his side for a 28th time in his 28 games as coach of Barca in midweek. There were more changes for the trip to Deportivo La Coruna, but remarkably, the starting XI was the same side that began last week’s league match against Atletico Madrid.

Barca, inspired by a Lionel Messi hat-trick, strolled to a 4-0 away win – a result which may convince Luis Enrique that he has finally stumbled upon a winning formula.

• What now for Granada?
Bottom of the table and without a win in La Liga since September Granada would not have relished a trip to reigning champions Atletico Madrid. And so it was to prove. A 2-0 defeat left them rooted to the foot of the table. All is not lost though; Granada, who sacked coach Joaquín Caparrós on Friday, are only three points adrift of safety.

• Who’ll score Swansea City’s goals now that Wilfried Bony’s gone?
Erm no one. Bony or no Bony, the Swans found Chelsea in scintillating form on Saturday and went down 5-0 at home to the league leaders.

Manager Gary Monk says he does not intend to buy another striker during January’s transfer window, but the news that Batefemi Gomis is unhappy with his lack of playing time, may prompt the rookie boss to have a re-think.

• Will Aston Villa fans turn up late?
Aston Villa supporters were urged to miss the first eight minutes of their home game with Liverpool in protest at chairman Randy Lerner. The planned late arrival represent one minute for each year the American has been in charge.

In the end, the protest turned out to be something a of a damp squib with the vast majority of fans taking their seats just before kick-off. Their loyalty was not rewarded as Villa suffered a 2-0 defeat – to extend their goalless run to 5 matches.

• Can Jermain Defoe continue his record of scoring on his debut for a new club?

Jermain Defoe remarkable record of scoring on his debut for a new club came to an end on Saturday. Defoe’s Sunderland travelled to White Hart Lane to face one of his former clubs Tottenham Hotspur. But there was to be no fairytale return for the striker, with Sunderland suffering a 2-1 defeat and Defore drawing his first blank in eight debut appearances.

It was not all plaing sailing for Laurent Blanc’s side who had to come from a goal down and were being held 2-2 until late goals by Javier Pastore and Edinson Cavano ensured all three points.

• Can Alexandre Lacazette maintain his amazing goalscoring run?
With 19 goals in the opening 20 league fixtures of the campaign, Lacazette had scored more frequently than any player in France’s top flight since Nantes’ Vahid Halilhodzic in 1984-85.

Lacazette continued his impressive run of form by netting in Lyon’s 2-0 victory over Lens. That win ensured Lyion stayed top of the table, a point clear of Marseille and four ahead of champions PSG.

IN THE REST OF EUROPE

• Can PSV stop Ajax from making it five Dutch titles in a row?
As the Eredivisie started up again, Phillip Cocu’s side enjoyed a four-point advantage over the reigning champions ahead their game against Vitesse in Arnhem.

True to his pledge to widen the gap on Ajax, Cocu’s side earned a 1-0 win away at Vitesse. Ajax, meanwhile, eased to a comfortable 2-0 win at home to Gronigen. The gap between the leading 2 remains 4 points.

• Will this year’s African Cup of Nations surpass expectations?
Too early to tell. Three of the four matches on the opening weekend of the African Nations Cup ended in 1-1 draws, so it seems reasonable to surmise that there a number of evenly matched sides at this year’s tournament.

The only team to win their first game were Gabon who defeated Burkina Faso 2-0. Their opening goal came courtesy of Pierre-Emerick Aubameyang, thus going some way to vindicate our prediction that the Borussia Dortmund striker is a potential superstar.