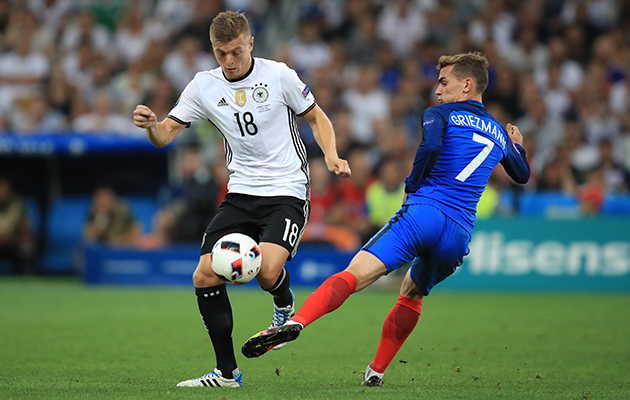 1. Nice guys do get ahead
For the first time ever, the editorial staff at leading football magazine, Kicker, has selected an overseas-based player or coach as their Man of the Year, bestowing the 2016 award on Real Madrid and Germany midfield general, Toni Kroos.

A choice even the most argumentative could not dispute. Consistently outstanding for both club and country, a Champions League and Club World Cup winner with Real and in this hype-driven age, a remarkably grounded and altruistic individual. Someone who prefers the big social picture to the glitz and glamour of his profession.

When not stylishly directing manoeuvres on the green rectangle, he devotes much of his energies to his charitable foundation for sick children and has raised considerable funds for specialist hospitals in Berlin, Düsseldorf and Köln.

“The work with the charity makes for a great contrast with the football business,” says Kroos, who in October extended his contract with Real until 2022.

“It’s through this that you realise what’s really important in life. I’m in the fortunate position to be able to help.”

Bundestrainer, Joachim Löw describes him as an “absolute role model”. And quite right too.

2. Call the tub-thumper
Beaten in 12 of their 16 games in the first-half of the season and seemingly odds-on to be stripped of their Bundesliga status, rock bottom Darmstadt have handed the coaching reins to former German international midfielder, Torsten Frings, who takes over from the sacked Norbert Meier.

The 40-year-old Frings, a key figure for the Nationalmannschaft in the successful World Cup campaigns of 2002 and 2006, is likely to build a team in his own image – eleven all-action warriors, single-minded, dynamic and fearless.

But does he have sufficient technical area know-how to pull off a survival miracle ? He never has been a Bundesliga head coach before and only has limited experience as a top-flight assistant: a couple of seasons as the right-hand man to Viktor Skripnik at Werder Bremen.

That said, he’s clearly excited by the huge challenge which awaits him at the Böllenfalltor and if his embattled charges do respond to his ‘up and at’ em’ ways, the doom and gloom could quickly lift.

“I believe 100 per cent that we will stay up,” declared Frings at his inaugural press conference. “As long as it’s possible, we’ll throw everything at it. We have to become a team again. A unit.”

3. Turkey out. Iberia and the Gulf in
The relentless wave of terrorist attacks and air of instability in Turkey has forced Bundesliga sides to rethink their winter break plans.

Only 12 months ago, 16 of the 36 teams in the top two German divisions held mid-term training camps in that part of the world, with the Antalya resort town of Belek by far the most popular base. This year, however, not one pro side will be heading to those warmer climes.

“It’s self-evident why our clubs no longer are flying to Turkey; it’s the price of the political situation,” says ex-Darmstadt director of sport, Holger Fach. “We used to have optimal conditions out there. There’s no other place in Europe where 50 teams would be in camp and where you could always organise a game.”

As an alternative to the Turkish Riviera, the likes of Dortmund, Gladbach, Augsburg and Mainz have plumped for Marbella on Spain’s Costa del Sol, while Hamburg and Eintracht Frankfurt are travelling to the luxurious surroundings of Dubal, RB Leipzig are off to Lagos in Portugal, league leaders Bayern Munich go to Doha in Qatar and Leverkusen head to Florida.

Three sides, Köln, Ingolstadt and Hoffenheim, have opted to stay at home.

“When the season restarts at the end of January, we won’t be playing in temperatures of 28 degrees,” explained Köln coach, Peter Stöger. 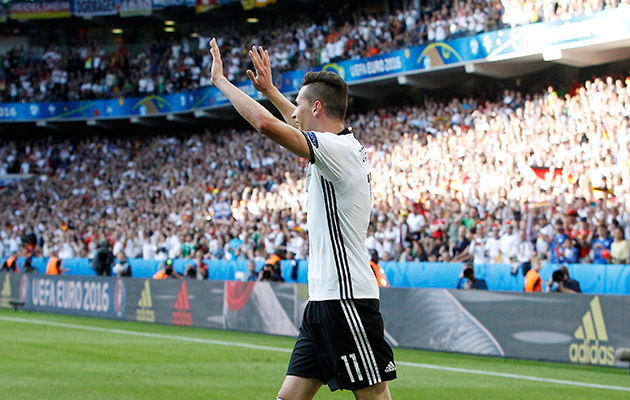 Julian Draxler has secured the move has has been looking for.

After many months of vainly trying to break free from his contractual obligations to Wolfsburg, misfit midfielder, Julian Draxler, finally has had his wish granted, completing a 42 million euro move to Paris Saint-Germain, where if French sources are correct, he will bank a monthly pay packet of 450,000 euros.

In the eyes of most Wolfsburg fans, the gifted young German international was guilty of a string of professional  misdemeanours: playing the spoilt diva, going through the matchday motions and poisoning the atmosphere at the club. But quick out of the blocks to defend him was former Wolves teammate and fellow national teamer, Mario Gomez.

“Not for a moment was Julian a bad apple,” insisted Gomez in ‘Welt am Sonntag‘. “He always gave his all. He wanted a transfer to a big club and the club respected that.”

Gomez also made it clear that the Wolfsburg players and they alone, were responsible for the team’s poor Autumn Championship showing (they currently are 13th with 16 points from as many matches). In more ways than one, we didn’t get it right as a team. ”

5. Bell sounds the alarm
Is there too much football on television these days?  Could a daily diet of the Big Match eventually lead to armchair fans turning off?

Mainz skipper, Stefan Bell, certainly thinks so. “I’ve got to the point where I don’t have the desire to watch a game on TV anymore,” the centre-back told Kicker.

“Apart from big tournaments, I hardly ever watch international matches. I believe there’s too much of it broadcast and that it’s a danger for the sport. Of course, it brings in more money. However is it sustainable ? We do run the risk of oversaturation.”

At the moment, a weekend round of Bundesliga action stretches from Friday to Sunday. Next season, though, five Monday games are set to be aired live.

“I’d be happy if there were no matches on Mondays. I hope our fixture list will not be further fragmented on monetary grounds.”