Paddy Agnew’s Notes from Italy: Ventura got it wrong but Italy live to fight another day

We all know that three months can be a very long time in football.   Watching Italy’s negative start in their Thursday night World Cup qualifier 1-1 draw in Turin with Spain, it was hard not to contrast that with their impressive 2-0 Euro 2016 win against those same Spaniards last June.

Some of the game stats make for depressing reading.   At half-time, the possession ratio was 71% Spain, 29% Italy, Spain had had six shots on goal whilst Italy had had none and by the end of the night the corner kick count was 13-2 for Spain.   Essentially, for the first 70 minutes, the match was played almost exclusively in Italy’s half of the field.   Commenting in “La Repubblica” on the Italian performance, veteran soccer writer Gianni Mura  wrote: “That they might be stronger than us, at least as far as their technique, their ball control and their tight passing game are concerned, we already knew.   But not to this embarrassing extent…”

For whatever reason – and here part of the blame must lie with coach Giampiero Ventura – Italy reverted to a defensive stereotype against Spain.   The game plan seemed to be – let them have the ball, defend in depth and hope that Buffon can deal with whatever chances they create.

Ironically, this minimalist game plan, to a certain extent, even worked.   For, not for the first time, Spain failed to convert their overwhelming dominance into goals.   In the end it required a colossal blunder by Italian captain and goalkeeper Gigi Buffon to set the Spaniards on their way via a 55th minute goal from Seville striker Vitolo.

Minutes later, Vitolo missed a glorious opportunity to wrap up the game, shooting wide when clean through.   Ironically, it was at this moment, with a wretched Italy having seemingly sunk as low as they could sink, that the azzurri clambered back into the game.

Two factors probably helped the Italian revival.   Firstly, the two substitute strikers, Ciro Immobile and Andrea Belotti, brought a missing sense of hunger, urgency and conviction back to the Italian game.   Secondly, having dominated the Italians with an aggressive, chasing game which kept the azzurri pinned into their own half, the Spaniards understandably began to tire in the closing quarter hour. 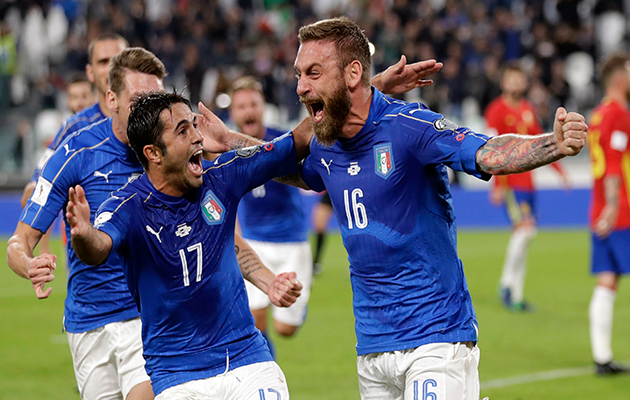 In the end, you could even argue that Italy deserved their 82nd minute penalty equaliser, converted by Daniel De Rossi.   Without any doubt, in the face of a frenetic fightback, the Spanish cracked.   Indeed, had the referee, German Felix Brych, not overlooked second yellow cards, due to both Diego Costa and Sergio Ramos, things could have been much worse for the Spanish.   (Mr. Brych did not have an inspired night.   Even the all important Italian penalty was awarded only thanks to the opinion of the goalline referee and not that of Herr Brcyh)

Having said all that, though, there remains the sensation that Spain were much the better team and should have won.   There remains, too, huge regret about Italy’s initial negative attitude.   The Julen Lopetegui Spain is similar to many of its predecessors in that it is a much better side going forward than in defence.   The panic created by Italy’s hectic final 15 minutes only underlined this point.

Here, the finger has to be pointed at coach Giampiero Ventura.   Did he not get it badly wrong, both in terms of selection and attitude?   Accustomed to guiding underdogs through a hundred Serie A relegation battles, did Ventura not set the bar too low, opting to limit the damages rather than go out to mix it with the Spaniards in the way that Antonio Conte’s Italy, with the same players, had done last June?

Time will tell.   The good news, from the Italian viewpoint, is that nothing has been definitively compromised and that Italy lives to fight another day.   Further good news is that Belotti and Immobile, two Ventura proteges from his Torino days, look ready and willing to play a big part in the rest of this qualifying round.

Which is probably a lot more than you could say of Graziano Pellè.   Having had a frustrating first half, spent chasing Spanish shadows, a disappointed Pellè failed to shake hands with coach Ventura when he was subtituted by Immobile in the 59th minute.   Pointedly, a furious Pellè walked straight past his coach and, as it turns out, straight out of the team.

This (Friday) morning, the Italian Federation confirmed that Pellè had been sent home because of his failure to “show respect to staff, his team mates and to the fans”.   Ventura may have had his tactical shortcomings but when it comes to team discipline, his message could not be clearer.

Next stop is Skojpe, Macedonia on Sunday.   Ventura cannot afford another false step.   This is one away tie that Italy have to win.   For Ventura, the pressure mounts.

A-League preview: Timmy to the rescue