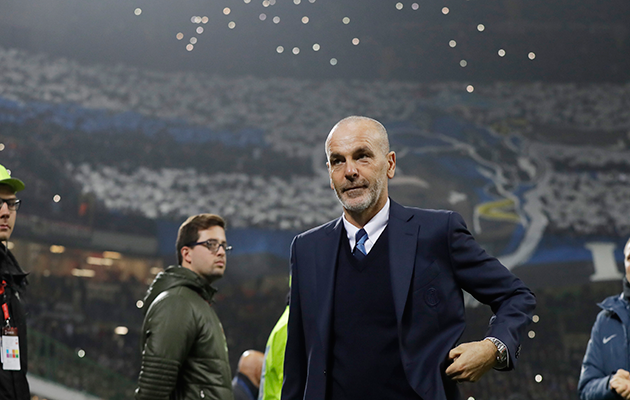 So, what has gone wrong at Inter this time?   By late November, the prestigious Milan club was not only languishing in ninth place in Serie A, 15 points behind leaders Juventus and eight points off the Champions League zone but it had also already sacked its August-appointed coach, Dutchman Frank De Boer.

Compounding their poor seasonal were some dreadful performances in the Europa League.   Drawn with Southampton, Sparta Prague and Hapoel Be’er Sheva in a seemingly straightforward group, Inter remarkably managed to lose four out of their first five games, finding themselves eliminated with a game still to play.

Ironically, it is always arguable that Inter’s current difficulties really began on the May 2010 night in Madrid when the the Josè Mourinho coached club lifted the third Champions League/Cup trophy of their history.   Mourinho wisely opted to jump ship that night.   Since then, and for a variety of different reasons, Inter have lost their way, especially with regard to their coaching appointments.

In the wake of the Special One, men such as Spaniard Rafa Benitez, Brazilian Leonardo as well as Italians Gian Piero Gasperini, Claudio Ranieri, Andrea Stramaccioni, Walter Mazzari and Roberto Mancini have all come, seen and not conquered at Inter.   You would have to agree, too, that not all these guys are duffers.  Rather coaches such as Benitez, Ranieri and Mancini, between them, have picked up Spanish and Premiership league titles as well as the Champions League, along the way. 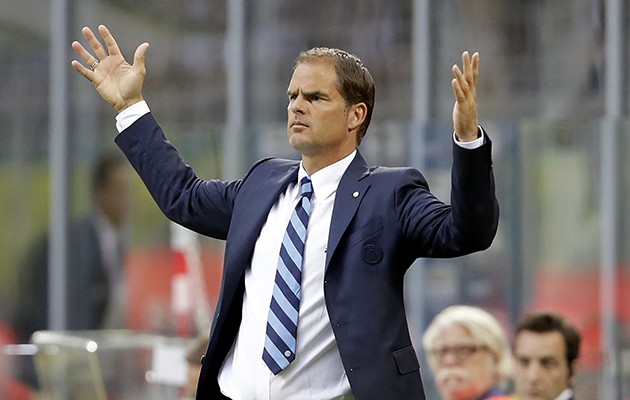 The latest Inter coach to bite the dust was Dutchman De Boer, sacked just 84 days after his surprise August appointment.   Inter finally ran out of patience with the Dutchman after a 1-0 away loss to Sampdoria, his seventh defeat in 14 official games.

De Boer’s brief time at Inter was nothing if not “lively”.   Arguing that Inter probably have too big a squad, he made little use of Brazilians Felipe Melo and Gabriel “Gabigol” Barbosa.   Furthermore he had disciplinary clashes with Frenchman Geoffrey Kondogbia and Croat Marcelo Brozovic, dropping both players for a while.

On top of that, his spell in charge was also blighted by a clash between club captain, Argentine Mauro Icardi and the club’s Ultra fans, prompted by the publication of Icardi’s autobiography.   Even if this spat had nothing to do with De Boer, it still probably cost his Inter three home points when they lost 1-2 to Cagliari on a day when the clearly unsettled Icardi missed a first half penalty.

On the pitch, De Boer’s Inter rarely looked like a solid, cohesive unit which knew what it wanted to do.   Rather, his side tended to rely heavily on the individual brilliance of players such as Icardi, Croat Ivan Perisic and Antonio Candreva.   On the pitch, too, his Inter went from the sublime to the ridiculous, beating champions Juventus 2-1 in Serie A but losing Europa League games to Sparta Prague and to Hapoel Be’er Sheva.

Italian critics all pointed to the folly of De Boer’s late appointment, in the wake of the break in relations with Roberto Mancini.   Asking De Boer, a coach with no experience of Italian football, to take over a squad not of his own choosing just 12 days before the seasonal start certainly looked like a foolhardy gamble.

Whilst Italian critics appreciated his disciplinary hard line, they were less impressed by his apparent indifference to tactical issues.  Furthermore, it was felt that he might have been better advised to include a senior Italian in his coaching staff, rather than rely on all-Dutch team.

Even if De Boer was inevitably disappointed with the premature end to his 12 match stint at Inter, he could at least take comfort from a €1.3 million severance pay clause in his contract.   Expressing his disappointment via his Instagram profile, he commented:

“It’s a pity it finished this way but more time was needed for this project.  I want to thank all the fans for the support they have shown me in these months.  Forza Inter”.

In the wake of the sacking of De Boer, it looked as if the club’s Chinese and Indonesian ownership would opt for a “prestige” international name (Dutchman Guus Hiddink, Frenchman Laurent Blanc and Brazilian Leonardo were mentioned in dispatches) as a replacement.  In the end, the Asian ownership opted for a much safer, more traditional Italian solution, namely a safe pair of experienced Italian hands, in the person of former Lazio coach, Stefano Pioli.

The new man’s first game in charge, by chance, was the Milan derby against city rivals Milan.   There could be no better occasion on which to make a good first impression.   Which is exactly what Pioli did when his Inter drew 2-2, thanks to a 92nd minute goal from Croat Ivan Perisic at the end of a game dominated for long periods by Inter. 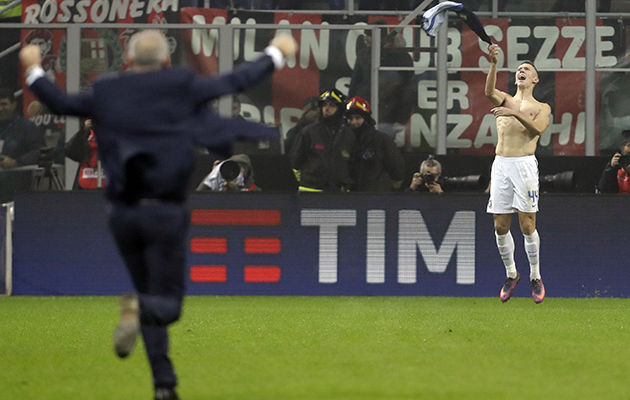 The relative euphoria in the Inter camp prompted by that performance was immediately mitigated by a 3-2 away loss to Hapoel Be’er Sheva in a game in which Inter had been 2-0 up at half-time.

In the short term, the latest Inter setback could see little used players such as Frenchman Jonathon Biabiany, Brazilian Felipe Melo, Montenegrin Stevan Jovetic and surprisingly,  “Gabigol” all launched on the January transfer window market.   In the longer term, the club hopes that Pioli gets a hold of his dressing room and moulds a team which can at least earn itself a Europa League qualification for next season.

All the indications, however, suggest that despite this less than ideal first season, the club’s new owners, the Chinese electronics and digital TV giant Sunning, are in it for the long run.  Suning, who bought a 70% shareholding in Inter for €280m in June, are expected to impact more in the future running of the club.

At the moment, it is not always clear who is calling the shots at Inter.  Is it the Suning boss, Zhang Jingdong?  Is it Indonesian tycoon, Erick Thohir, who now has a 30% holding but who was the original Asian investor three years ago?  Or indeed is it the Inter sports director, Piero Ausilio?  The problem is that, in all likelihood, all three (and others as well) currently have a say in the day to day running of Inter.   However, on the road from Milan to Nanjing, wires tend to get crossed.

Take the idea that the club might now sell or loan out “Gabigol”, the 20-year-old ex-Santos striker bought in late summer for €29 million euro.  Does it make any sense to spend that sort of money on a player, only to offload him a couple of months later?     Especially, when you realise that he has only played once, in a 1-1 home draw against Bologna?    Is this a case of too many cooks (agents, advisors, scouts etc) spoiling the broth?

A certain confusion, mismanagement and overlapping of responsibilities is only logical for a huge “brand” like Inter which has changed ownership three times in the last three years.   Observers close to Inter, however, remain convinced that Suning’s interest and commitment has not been undermined by the poor seasonal start.

They point to the increasing involvement (and presence) of Zhang Jingdong’s 25-year-old son, Steven, in Inter affairs, as an important statement of intent.   American educated (at the Wharton School, University of Pennsylvania) and someone who has worked for JP Morgan and Morgan Stanley, he may be well-equipped to deal with a western economic environment, but he may have a lot to learn about football.

One thing is clear, however and it is that the Suning interest in European football was further underlined in November when digital broadcaster PPTV, a video streaming website owned by Suning Holdings, signed a three year deal worth $700 million dollar with the Premier League.    Clearly, too, the Premier League and the Inter investments fit in with the aim of Chinese President XI Jinping, a well known soccer buff, to transform this 1.3 billion strong nation into a soccer superpower by 2050.

For that reason, the long term outlook for Inter might be brighter than you think.  In  the meantime and in the short term, Inter need not only some morale-boosting winning results but also a couple of urgent personnel changes.   Whilst players like Argentine Mauro Icardi, Croat Ivan Perisic, Croat Marcelo Brozovic, Antonio Candreva and Italo Brazilian Eder, to name but the obvious, guarantee real quality up front, Inter currently lack a defensive midfield filter and a top class central defender, someone to play alongside Brazilian Miranda.

Inter may well have those players in their squad, in the shape of Argentine Ever Banega or Frenchman Geoffrey Kondogbia for midfield and Colombian Jeison Murillo in defence.   All three are currently not playing to their best.  One thing is for sure and it is that new coach Pioli will have to work some magic on his squad, magic more of the psychological than the tactical kind.

Otherwise, longtime observers of Italian football like your correspondent are going to finally admit that Inter is a club, condemned to live with a Faustian curse which grants it endless years of torment and failure, occasionally interspersed with short periods of intense success (2010, 1963-65 Champions League/Cup).   Maybe, the men from Asia will be able to banish the curse.