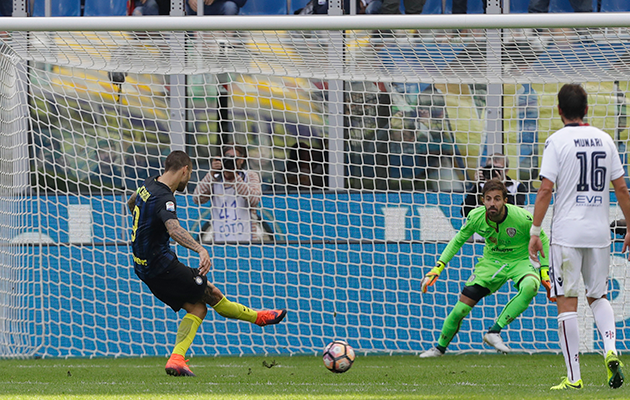 If there is one thing that we have learned over the years, it is that Inter are a club capable of creating their very own problems. Take the most recent row between team captain, Argentine striker Mauro Icardi, and Inter’s diehard “Ultra” fans.

The row burst into public view on Sunday when Inter disappointingly lost 2-1 at home to Cagliari in a game in which Icardi managed to miss a first half penalty with the score on 0-0. In reality, though, a bitter disagreement between Icardi and a section of the Inter ultras had begun earlier, with the publication last week of Icardi’s autobiography, “Keep On Trucking – My Secret Story”.

At the age of 23 years, one might be tempted to ask if an “autobiography” was not just a tad premature, but that is a matter for other days. The thing about this book is that, in it, Icardi chose to recall a clash between himself and Inter ultras which took place after a 3-1 away defeat to little Sassuolo in February 2015.

He recalls how, after that game, he had gone over to the Inter fans and offered his team shirt to a young Inter fan. At that point, however, an angry Inter ultra stepped in, took the shirt from the child and threw it back in Icardi’s face. The player’s account of the incident continues:

“At that moment, I saw red. I wanted to hit the bastard after what he had just done. So I began to insult him, heavy insults.

‘Piece of shit. You do the big man and the bully with a child just to show how tough you are to the fans. You should just be ashamed of yourself, you should all be ashamed’

“Then I threw the shirt back into his face…”

Icardi’s story continues and it gets worse. Informed by the Inter club management that he had better be ready for problems from fans when he got home that night after the game, he said he was ready to deal with them “one by one”, adding:

“Maybe they don’t know that I grew up in a crime-ridden Latin American city zone (in Rosario) where you had people killed in the streets. How many of them are there? 50, 100, 200…Well let them know this. I will bring over 100 criminals from Argentina and kill them all on the spot and then we’ll see…” 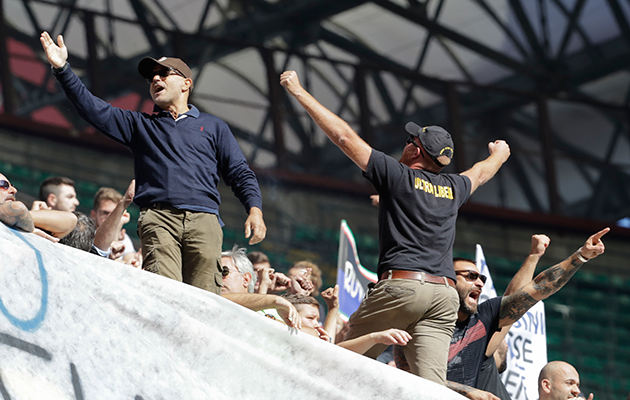 Even if it would appear that Inter were unaware of the explosive nature of the autobiography, its content certainly did not escape the notice of some Inter fans. When he stepped out onto the San Siro pitch on Sunday, Icardi was greeted with a far from friendly banner displayed by his own fans:

“Icardi, you lousy liar, Take off the captain’s armband…”

Among other things, it seems that the ultra hotly dispute Icardi’s version of events in the sturm und drang of the post-Sassuolo argy-bargy. In such a context, it was hardly surprising that Icardi had a poor game in a defeat which saw them drop to joint tenth in the table. That the club was less than happy with Icardi also became immediately clear. Speaking after the game, team director Piero Ausilio commented to Gazzetta Dello Sport:

“As far as the things written are concerned, the most stupid thing was to bring up a story from the past and then retell them in a probably inaccurate manner…”

Icardi’s compatriot, long time Inter icon, Javier Zanetti, today a club director, also expressed his disapproval, saying: “…the fans are the most important thing and we’ve all got to respect them. We cannot have this sort of behaviour from a person who works for the club…”

Had Zanetti known that the “fans” had another banner waiting for Icardi when he returned home on Sunday night, he might not have been so keen to defend them. Outside Icardi’s apartment, the banner read:

“We’re ready for you, Just tell us when your friends from Argentina arrive…Or will you just run away?”

Doubtless, this storm will pass. It certainly is not the first “incident” in the dramatic life and times of Mauro Icardi. Until this weekend, he had been best known as the guy who “stole” the wife of compatriot and then-Sampdoria team mate, Maxi Lopez. Icardi had met Lopez’s actor wife, Wanda Nara, during his time at Sampdoria.

After more than five years of marriage and the birth of three children, Ms. Nara and Lopez divorced in November 2013. Within six months, Icardi and Wanda Nara had married in Argentina. Nowadays, 29-year-old Ms. Nara works as Icardi’s agent, whilst the couple have had a child of their own and Ms. Nara is currently pregnant with her second baby by Icardi.

If anyone had had any doubts about just how Maxi Lopez felt about the whole business, the player made it crystal clear when the two men came face to face on the pitch prior to an infamous Sampdoria v Inter game, just five months after he had split up with Wanda (by this stage, Icardi had moved to Inter). In a very public gesture of disrespect, Lopez refused to shake hands with his rival and one time friend in the ritual pre-match team handshakes.

The whole Icardi-Lopez-Nara triangular story has had transcontinental echoes, too, if Argentine media reports are to be believed. There are those who say that Argentine ace, Lionel Messi, an old friend of Lopez, has “banned” Icardi from the Argentine World Cup squad. Argentine coach, Edgardo Bauza, denies such speculation but…

What cannot be denied is that no less a figure than Diego Maradona, in Rome last week for a charity match, branded Icardi a “traitor” and refused to say anything more about him. If you did not know it already, the life and times of Icardi would seem to remind us that football marches to the sound of its own (moral) drum.