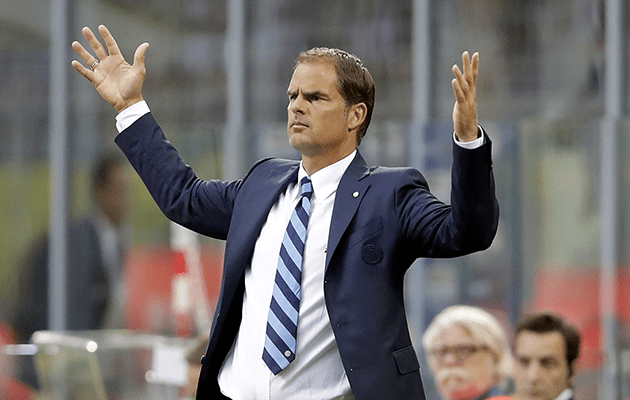 Inter have sacked coach Frank de Boer after he won just four of his first 11 Serie A games.

The Italian outfit lie 12th in the table and Sunday’s 1-0 loss at Sampdoria – their fifth defeat of the campaign – appears to have been the final straw for the Inter hierarchy.

Reports in Italy said De Boer was to fired during a phone call with the club’s Chinese owners. The Suning Holdings Group bought a majority share in the club in June and has acted quickly to arrest the club’s decline.

“Inter would like to place on record its thanks to Frank and his coaching team for their work with the club over the past months and wishes them the best for the future.

“Further announcements regarding the first team coaching position will be made in due course.”

De Boer was appointed in the summer after leading led Ajax to four successive Dutch titles. They lost out to PSV Eindhoven on the final day of last season.

The former Netherlands defender was linked with vacancies at Premier League clubs Everton and Southampton in the summer.

It is six years since Inter won the treble of Serie A, Coppa Italia and Champions League under Jose Mourinho, but since coming second in 2011 they have finished sixth, ninth, fifth, eighth and fourth. Their next coach will be the ninth they have appointed since Mourinho left for Real Madrid in 2011.