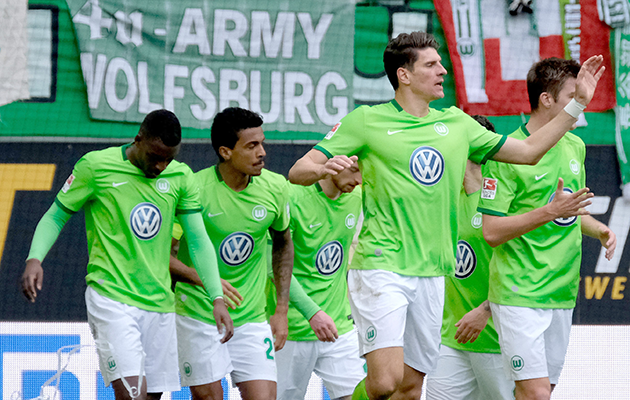 Just because Darmstadt and Ingolstadt look destined to occupy the two direct relegation spots does not mean that everyone else in the lower reaches of the Bundesliga can now breathe easily.

Thanks to the German system of end-of-season relegation/promotion play-offs – pitting the 16th club in the top-flight against the team finishing third in the second tier – elite high anxiety is guaranteed right until the bitter end and this term it’s a particularly widespread phenomenon, with half the league in a cold sweat.

As of this weekend, the 25th of 34 Bundesliga rounds, only five points separate Hamburg in 16th from tenth-placed Borussia Mönchengladbach and even Schalke in ninth, are twitching nervously, well aware they could be sucked in if they do not find a cure for their chronic inconsistency.

There certainly is no shortage of big clubs cowering under this Sword of Damocles. Former Deutschland title-winners such as Hamburg, Gladbach, Bremen and Wolfsburg. Or multiple Champions League participants, Leverkusen whose fall from grace in 2016-17 has taken everyone by surprise.

Some are dealing with the pressure better than others. Although hammered 8-0 at Bayern last month, Hamburg have only lost one of their last seven fixtures, a sequence including victories over high-flying RB Leipzig and Hertha Berlin, while Bremen – who upset Leipzig 3-0 at the weekend – have won three of their last four.

Under new coach, Andries Jonker, Wolfsburg finally are showing signs of resistance too. In his three games in charge, Jonker has yet to taste defeat (winning two and drawing the other) and clearly made the correct diagnosis when insisting they play with greater aggression and directness.

The Wolves, however, will have to keep up the good work. For all their improved results of late, they remain bogged down in the standings, a source of much frustration for rejuvenated striker, Mario Gomez.

“We’ve picked up seven points from our last three games and we’re still only 15th,” declared Gomez after heading in the only goal of the game against Darmstadt on Saturday, his third consecutive match on the score-sheet. “It’s comical.”

So who will be the odd one out in 16th ? History points to Hamburg, who twice in the past three years have somehow managed to maintain their balance on the play-off high-wire. Spring Championship form says Mainz or Leverkusen, both of whom have acquired a losing habit in 2017.

And their defensive shortcomings could spell disaster for FC Augsburg. Since coach Dirk Schuster was sacked in December and replaced by Manuel Baum, the FCA rearguard has been an essentially part-time operation, sloppy, uncoordinated and remarkably vulnerable to a well-worked set-piece.

Twenty-seven points left to play for. One of eight or nine for the repechage. Only those with strong nerves need apply.

What We Learned This Week
1. Let’s not be Modeste
On target in every one of Köln’s nine wins this season, front-line spearhead, Anthony Modeste, very much continues to be the Billy Goats lucky charm, netting his second hat-trick of the campaign in the 4-2 home victory over a decidedly outmuscled Hertha Berlin.

With 22 goals this term, the 28-year-old Frenchman is only one unit adrift of Dortmund’s Pierre-Emerick Aubameyang in the Bundesliga scoring charts and could, with a fair wind, become Koln’s best-ever single-season marksman. The current record is held by the late Hannes Lohr, who hit 27 back in 1967-68.

2. Hail the gentleman footballer.
The phrase “win at all costs” is not one which strikes a chord with Gladbach midfielder, Jonas Hofmann, who on winning a free-kick in Sunday’s 1-0 loss to Bayern, immediately advised referee, Tobias Stieler, that he didn’t think he had been fouled, an admission which forced the official to plump for a drop-ball instead.

“I didn’t dive and I didn’t make any appeal,” said the former Dortmund starlet afterwards.

“For me it’s entirely normal for a referee to ask if I’d been brought down and for me to reply that there was nothing in it. “