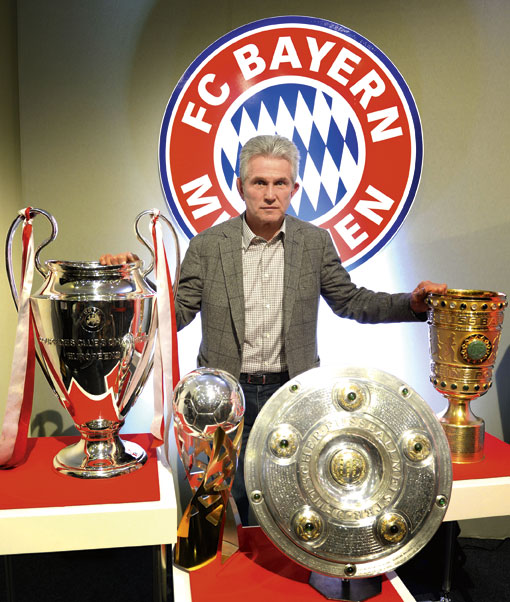 Jupp Heynckes with his collection of trophies from the 2012-13 season.

While the vast majority of retired workers have to make do with a watch or a clock on their send-off, Jupp Heynckes was the recipient of a far more substantial gift last spring, receiving widespread adulation and critical acclaim for his role as the architect of Bayern Munich’s perfect season, winning the Champions League, Bundesliga and German Cup.

Fifteen years after steering Real Madrid to victory over Zinedine Zidane’s Juventus in the 1998 Champions League Final, “Don Jupp” had a smile as wide as the Rhine as Bayern celebrated their fifth European title, at Wembley in May. And as only the fourth coach to lead two different clubs to the biggest prize in European football, his place in the record books is assured.

Cynics might suggest any reasonably competent coach could have made hay with a 2012-13 Bayern squad stacked with talent and experience, but that would be grossly unfair on the 68-year-old former Borussia Monchengladbach and West Germany front runner. With expectations sky high, the dressing room full of wilful star names and the media spotlight raining relentlessly on the club, the man responsible for the first team at Bayern has many balls to keep up in the air. So it says everything about Heynckes that he has not once been caught napping, not even when the club announced midway through last term that they intended to bring in Pep Guardiola at the end of the season.

Heynckes, keen to stay for another campaign at least, felt he was being prodded towards the exit, but rather than whipping up a storm in the press he kept his head down and concentrated on the job in hand, maintaining the intensity of his players and making the right tactical and selection calls.

The triple he went on to mastermind was the ultimate retort to those who doubted him, but there was never any possibility of the hero of the hour signing off with a salvo of public point-scoring. He is too much the gentleman for that.

It takes great comprehension, sensitivity and psychological nous to manage a complex, high-profile team such as Bayern, and in his three spells in charge he has very much fitted the bill. In marked contrast to predecessors Felix Magath, Jurgen Klinsmann and Louis Van Gaal, whose bull-in-a-china-shop ways made enemies by the dozen, Heynckes always strove to be consensual and respectful of Bayern’s traditions.

Meticulous, diplomatic and excellent at man-management, the low-key Heynckes was an ideal fit for the often volcanic “FC Hollywood”. Winning teams only come about when the players buy into the coach’s vision, and at Bayern last year the superstars certainly responded to Heynckes’ plans for total domination at home and abroad.

Influenced during his own playing days at Gladbach by German coaching greats Hennes Weisweiler and Udo Lattek, Heynckes has very much earned the right to sit beside them in the Bundesliga Hall of Fame.