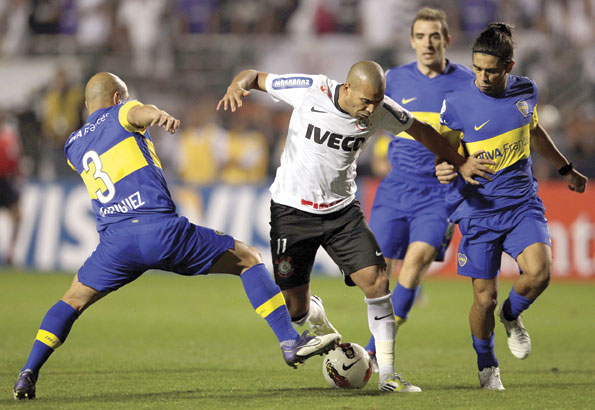 When Emerson Sheik was caught biting Boca Juniors centre-back Matias Caruzzo during the Libertadores Final it was somewhat fitting as it was he who provided the Brazilian team’s cutting edge in the tournament, especially at the business end. He scored both goals in the second leg against Boca, set up the equaliser in the first leg and curled in the winner away to Santos in the opening game of the semi-final.

His foolish sending-off against Santos was just another example of his uncanny ability to land himself in trouble. In 1999
he represented Brazil’s under-20 side when he was overage – he played under a false identity of a person three years younger – and in 2008 he represented Qatar at senior level when he was ineligible to do so.

After leaving Sao Paulo as a youngster, Emerson developed his career in Japan, but it was his connection with the Middle East that meant that he was nicknamed “Sheik” when he returned to Brazil to join Flamengo in 2009. Strong and skilful, happiest out wide but comfortable through the middle, he was soon rattling in the goals and helped Fla to the league title.

A year later, after a quick return to the Middle East, he did it again with Fluminense, scoring the goal that clinched the championship, and then made it three in a row when, signed as a Ronaldo replacement, he won another Brazilian
title, this time with Corinthians.

However, his crowning glory was the five-goal Libertadores campaign, which provided convincing evidence that the fake sheik is the real deal.

Naturally, that did not mark the end of his problems, though. Struggling with injury during the latter part of 2012, he was charged with illegally importing two BMWs in the build-up to the Club World Cup.