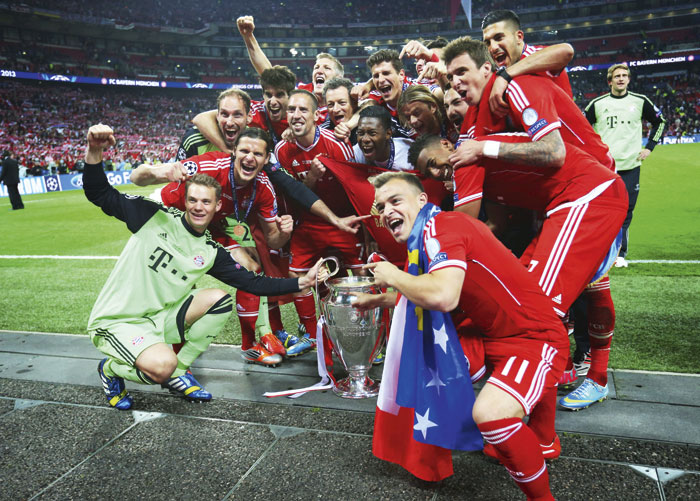 “This is the best and most impressive moment in our 113 years in business,” declared Bayern Munich chairman Karl-Heinz Rummenigge at the club’s recent annual general meeting. “We’ve experienced an unbelievable year. I believe there’s never been a better time to be a Bayern fan.”

Supporters of a certain vintage might beg to differ in the game of generational comparisons, preferring the warm glow of the mid-1970s when a team featuring the outstanding talents of Franz Beckenbauer, Gerd Muller, Sepp Maier, Franz “Bulle” Roth and Uli Hoeness claimed three straight European Cup titles. But even the most ardent oldie would have to admit that when it comes to single-season omnipotence, the class of 2012-13 simply has no equals, their place in history secured by German football’s first-ever treble: Champions League, Bundesliga and German Cup.

Taking their motivational cue from the heartbreak of their backyard penalty shoot-out loss to Chelsea in the Champions League Final of 2012, Bayern’s reaction was to regroup and hit straight back, their perfect mix of singular flair and collective cohesion powering them onwards and upwards in a blaze of goals and clean sheets.

Whether hammering Barcelona 7-0 on aggregate in Champions League semi-finals or domestically calling the shots – they lost only one league game all season and finished a massive 25 points ahead of runners-up Borussia Dortmund – Bayern more or less spent the campaign in cruise control; too cute, too skilled and too organised to be denied.

Equipped in every department with world-class calibre, Bayern always seemed to have a rabbit to pull out of the hat: a vital save from goalkeeper Manuel Neuer; the electrifying overlapping of full-backs Philipp Lahm and David Alaba; or Brazilian centre-back Dante galvanising his colleagues by word or deed. Midfield traffic cops Bastian Schweinsteiger and Javi Martinez responded with muscle and conviction in times of strife, Franck Ribery and Arjen Robben weaved their magic out wide, while front runners Mario Mandzukic and Thomas Muller fired the bullets.

Underpinning this know-how and ability was the sort of spirit to move mountains, a togetherness, resilience and a sheer relish for the heat of the battle. With the tone set by coach Jupp Heynckes’ perfectionist tendencies and insistence on focus and humility, Bayern just kept on rollin’. No pit stops. No breakdowns. No wrong turns.

“I’ve never seen a more closely knit and determined group,” said Heynckes after his side’s 2-1 victory over Dortmund in the Champions League Final at Wembley. “Right from the beginning of the season, no one let up.

“The Chelsea defeat was a cruel blow, but we didn’t let it get us down. Quite the opposite. We changed a lot of things [most of them related to defensive rigour and pressing], bought some new players [Dante, Martinez and Mandzukic] and worked on every last detail.”

On retiring at the end of last season, Heynckes spoke about leaving successor Pep Guardiola “a team in a perfect shape” and no one was prepared to deny that assertion. Many felt the former Barcelona boss had inherited a poisoned chalice, that improving on perfection was mission impossible. But so far, so good. Guardiola has seen Bayern safely through to the Champions League knockout phase and kept them top of the Bundesliga tree. In beating Augsburg in November, the Bavarians became the proud owners of the longest unbroken run in German top-flight history (37 games) and, step by step, Guardiola is doing exactly what he was headhunted to do: carry on winning while cultivating a long-lasting and clearly defined playing style, a badge of excellence to remain even when he does eventually move on.

Much to the delight of the Bayern hierarchy, their sporting and commercial “brand” continues to grow apace. Thanks to their Champions League triumph, their fifth in total, the club has re-established itself at the European summit, and at the club’s AGM – an event where Wall Street met terrace celebration – executive board member Jan-Christian Dreesen had plenty of good news to convey, namely a record ¤432.8million turnover for 2012-13 and profits after tax of ¤14m, up from ¤11m in the previous exercise. It’s 21 long years since Bayern were in the red – no wonder Rummenigge describes the club as being “as fit as a fiddle”.

While some like to pigeon-hole today’s Bayern as a bean-counting corporate model this is only part of the story. With characters like maverick winger Ribery and director of sport Matthias Sammer stalking the scene, there is more than enough heart and soul to go around. And as for human foibles, they are all too evident.

Hoeness, the larger-than-life club president, goes on trial in 2014 for tax evasion and the media is currently awash with stories of the “Bayern mole” – the insider who leaked Guardiola’s line-up and tactical plans to Bild newspaper on the eve of November’s top-of-the-table trip to Dortmund.

Despite Bayern’s 3-0 win – helped by Dortmund’s injury-ravaged back-line – Guardiola was in no mood to crack open the champagne, opting instead to instigate an all-out search for the deep throat. “No matter who it is, heads will roll,” he stormed. “I will throw him out. He will never play under me again.”

Whether it be Guardiola, the notoriously hard-to-please Sammer, the directors looking to extend the club’s global reach – plans are afoot for offices in Shanghai and New York – or their still-hungry star players, no one at Bayern ever seems satisfied. At the Allianz Arena standing still is forbidden.