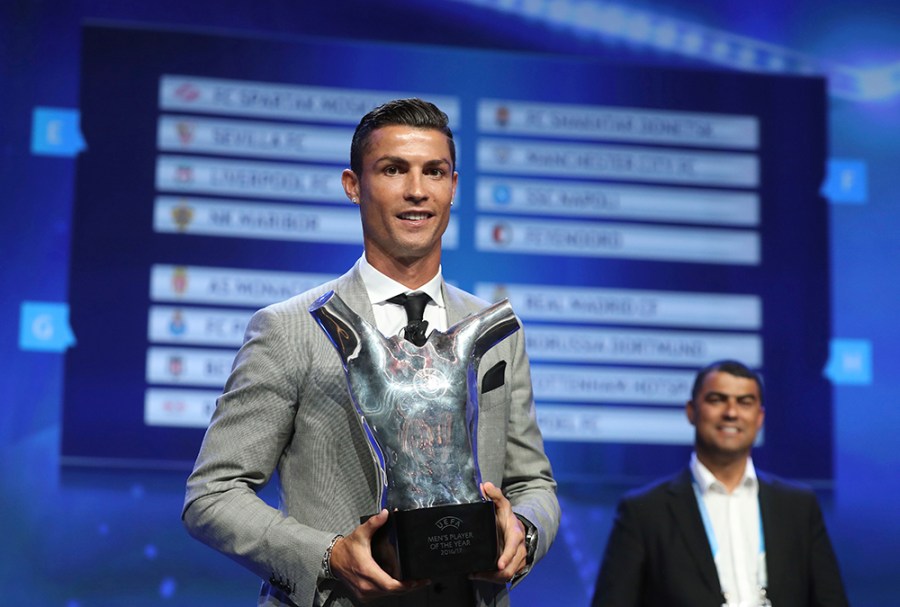 From Keir Radnedge in Monte Carlo

Cristiano Ronaldo laid hands on the latest of more than 150 personal accolades in his remarkable career when he was voted UEFA’s Player of the Season for the third time in four seasons.

Ronaldo ended 2016-17 in triumph with Real Madrid having become the first club to win the modern-era Champions League two seasons in a row to add to their world and Spanish league prizes.

He scored 12 goals in Europe’s elite club competition including two in the 4-1 defeat of Juventus in the final in Cardiff. They took his total to a record 106, comprising 16 with Manchester United and 90 with Madrid.

The Portugal skipper then led his European national team champions to the semi-finals of the FIFA Confederations Cup in Russia in June and July.

Ronaldo also helped Madrid to victory over Messi’s Barcelona in the season’s curtain-raising Spanish Supercup despite being sent off.

The 32-year-old’s angry push of referee Ricardo de Burgos as he left the pitch landed Ronaldo with a five-game ban which meant he missed last weekend’s LaLiga kickoff.

Madrid coped. They defeated Deportivo 3-0 last Sunday in La Coruna without Ronaldo who then scored what proved the winning goal in Tuesday’s 2-1 victory over Italy’s Fiorentina in the annual Santiago Bernabeu trophy game.

Ronaldo, who had won the UEFA award in 2014 and 2016, was also voted the European body’s Forward of the Season. Positional prizes went to team-mates in defender Sergio Ramos and midfielder Luka Modric. The only exception to Real’s rule was Juventus’ Gigi Buffon, UEFA’s Goalkeeper of the Season.

Ronaldo and Madrid will launch the defence of their record 12th European Champions’ crown against Borussia Dortmund, Tottenham Hotspur and APOEL of Cyprus. The draw, at UEFA’s traditional club season launch, matched a simultaneous further celebration for Madrid whose coac h Zinedine Zidane has agreed a contract extension until 2020.

Zidane has guided Madrid to seven national and international titles since taking over from Rafa Benitez in January last year. A club statement described him as extending his contract as “conditions that the club leaders have deemed appropriate.”

Champions League history is being made this season with no fewer than five English clubs involved in Madrid’s initial rivals Tottenham as well as Chelsea and Manchester City plus Liverpool and Manchester United. Liverpool earned their presence through a qualifying victory over Germany’s Hoffenheim while United entered the draw by virtue of their victory in last season’s Europa League.