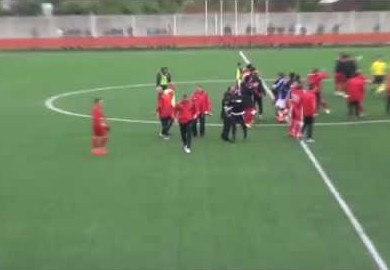 Ucha Sosiashvili has guided Dila Gori to the Georgian league title for the first time after building up an unassailable lead over second-placed Dinamo Tbilisi with two games remaining.

Impressively, this is first season in charge, but even more remarkably, Sosiashvili is only 25 years of age, which must make him one of the youngest people to ever win a UEFA sanctioned competition. To put that into context, the youngest coach to win a European continental competition is Andre Villas0-Boas, who was 33 when he lefted the Europa League with Porto in 2011.

A 1-0 win at Samtredia took the Gori side six points clear, and a superior head-to-head record against reigning champions Dinamo Tbilisi means they cannot be caught.

“We knew a win would decide the fate of the title and we were determined not to linger on it,” said skipper Alexandre Kvakhadze, who scored the only goal after 43 minutes.

“I’m having the most pleasant feelings in my life,” added Sosiashvili, who previously worked with Dinamo Tbilisi’s second team and Samtredia.

“It’s a great happiness to see the results of your work together with the team. I want to congratulate everyone, especially the fans who were with us all the time. We are happy this team could win the first ever championship for our club.

“They say experience is a key to success at this level, but my example shows it can be the other way. I had no doubts I was able to lead a top-flight side but of course I never expected at the start of this season that we would win the title.”