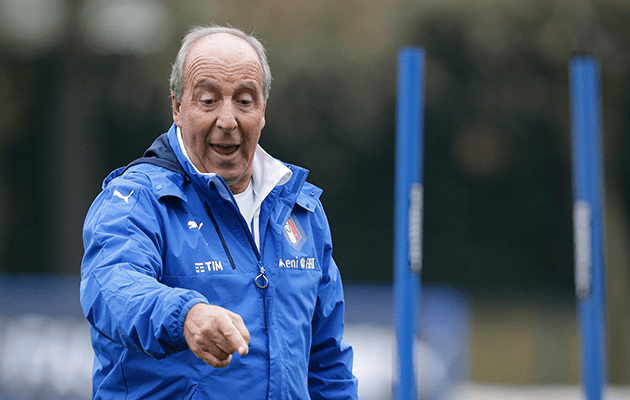 How often do Italy win an away World Cup qualifier 4-0 and still feel dissatisfied?   That was the situation this weekend in the wake of Italy’s 4-0 win over little Liechtenstein in Vaduz on Saturday night, thanks to goals from Belotti (2), Candreva and Immobile.

“Italy, A Half Victory” was the hardly kind headline awarded by sports daily, Gazzetta Dello Sport which like many others had been hoping for a “goleada” (hatful of goals) against little Liechtenstein.   At the end of the day, though, Italy simply do not do “goleadas”  (hatfuls of goals).   In the run-in to Euro 2016 this summer, for example, they struggled to two 1-0 wins over mighty Malta.  In 2011, whilst on their way to the Euro 2012 in Poland and Ukraine, the Azzurri were again less than impressive as they beat little Faroe Isles 1-0 in Torshavn.

The point, of course, is that there really are only two probable winners of Italy’s qualifying Group G, namely Italy or Spain.   At the moment, these two sit joint top of the table on 10 points.   Crucially, though, Spain have a goal difference of plus 14, whilst Italy are on plus seven.   In other words, if the Group ended today, Italy would be looking at the lottery of the November 2017 play-offs, as the second placed team in the Group.

Which is all by way of explaining the talk about a “goleada” prior to the Liechtenstein game.   Even if Italy played well against their modest opponents, being 4-0 up at half-time, that was the end of their scoring.   Enough was enough.

Having drawn 1-1 with Spain in Turin last month, Italy are now looking at the uncomfortable reality that they could find themselves travelling to Spain next September needing an away win to win the group.   All of this explains the less than wild enthusiasm about the Liechtenstein result.  After all, Spain opened up their World Cup campaign by stuffing the same Liechtenstein minnows 8-0 in Leon.

If Giampiero Ventura’s Italy did not convince all his critics, he now finds himself facing another delicate task when his team face World Champions Germany in a prestige friendly at the San  Siro, Milan tomorrow night (Tuesday).   Ventura has made little secret of the fact that, as he tries to build a new, younger Italy, centred around men like strikers Andrea Belotti (Torino), Ciro Immobile (Lazio) and  Lorenzo Insigne (Napoli), he could probably have done without quite such a tough test, saying:

“The German team is obviously a lot better than us and we certainly won’t be able to play against them as we did against Liechtenstein (with an attacking 4-2-4 line up)…It would have suited us better to meet a less strong team than Germany just now, so as to keep the (winning) momentum going…and that was the important thing, winning”

People will be watching tonight’s game closely to see if this fledgling Ventura Italy can go out there and mix it with Germany in anything like the impressive manner in which Antonio Conte’s Italy swapped blows with both Spain and Germany in France this summer, beating Spain 2-0 and going out to Germany only on penalties.   After all, Ventura’s reign started in September with a 3-1 fiendly loss to France in Bari.

In the end, too, this could be a misleading, “academic” exercise since both the Germans and the Italians may well field teams packed with squad reserves.   Ventura, however, seems to be preparing himself for the worst, commenting in a news conference today:

“Results matter but you need to look at the bigger picture, obviously with an eye on planning.   Our future is not just tomorrow. The Germany game must offer a glance into the future that we want.

“My debut was against France and people were critical about the result, but my aim is to care for the young players.  The result will matter and I know that but there will be other things to look at after the match.”

In the meantime, the Germans summoned some extra special, motivational help when they had a Vatican audience in Rome today with Pope Francis, just three days after they had beaten hapless San Marino 8-0 in a World Cup qualifier on Friday night.   The Pope said that the German “Mannschaft” (team) often lives up to its name, in that its success is based on “respect for others and team spirit”.   He has a point.