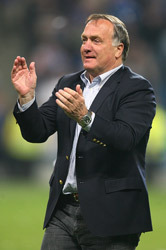 Liverpool, who are riding high at the top of the Premier League, make the trip to White Hart Lane to face Spurs this Saturday evening – 17:30.

Zenit St Petersburg coach Dick Advocaat has confirmed that he will extend his contract with the Russian premier league club for another year.

“Yes, I will sign (a new contract),” the Dutchman, who last year steered Zenit to their first league title in more than a quarter of a century and also led them to UEFA Cup victory in May.

“Unfortunately, I am not young and I have to think about spending more time with my family,” he said then.

The feeling in St Petersburg was that the coach would quit his job at the end of the year after a disappointing league season in which Zenit were unable to retain their title.

But he said: “Our aim is to win the title next year.”

Advocaat took charge of Zenit in June 2006 after stepping down as South Korea manager when the Asian country were eliminated at the group stage of the World Cup in Germany.

Liverpool, who are riding high at the top of the Premier League, make the trip to White Hart Lane to face Spurs this Saturday evening – 17:30.