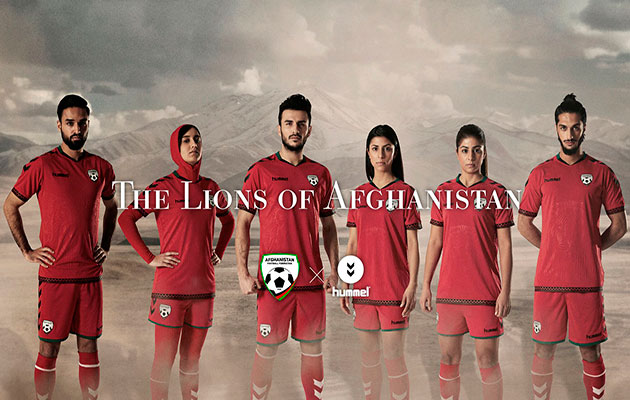 The hijab itself forms part of a baselayer shirt and allows the women to perform whilst covered head-to-toe. The new strip is the first to incorporate the head covering since the International Football Association Board permitted players to wear the hijab in 2014. The campaign for female footballers to wear the hijab had been launched in 2012 by Prince Ali bin Al Hussein, who earlier this month failed in his bid to become the next president of Fifa.

The Afghan Lions adorn the front of both mens and womens new shirts and have been designed to reflect the calligraphy and word carving for which the country is synonymous.

Former Afghanistan national women’s team captain, Khalida Popal, who worked alongside hummel in the design of the new kit, spoke of the meaning and significance of the new design.

Popal made over 20 appearances for her country before a knee injury forced her premature retirement. She now lives in Denmark, but despite having to flee the country due to concerns over her safety, remains heavily involved with the Afghanistan national team through their links with hummel as part of the brand’s mission to Change the World through Sport. 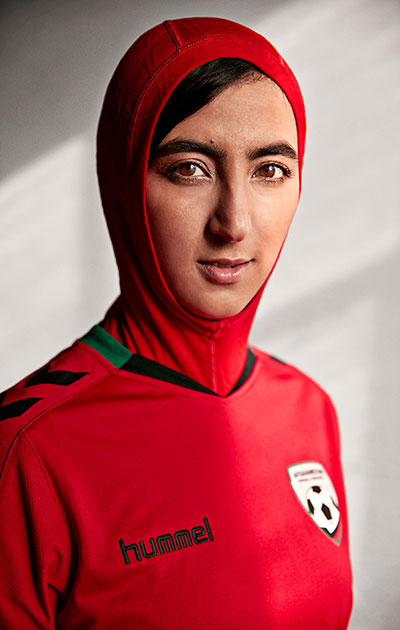 Khalida Popal was forced to flee her homeland due to concerns over her security.

“For a country like Afghanistan, wearing the national uniform, is a kind of power, a tool to give confidence for a woman,” she said. “That makes you feel powerful.”

“It was a huge honour to captain my country but it was an even bigger honour to be seen as a role model and an inspiration for thousands of young girls and women in Afghanistan.

“I think the Afghanistan women’s team shows the huge potential football has as a unifying force. I like to think that we have given a lot of women in our country fresh hope.”

“Many of these women have to or want to wear a hijab, and that’s why we have chosen to make a very cool and very fashionable sports hijab for these great girls of Afghanistan.”

hummel will donate €15 to the Afghan women’s team for each shirt sold.