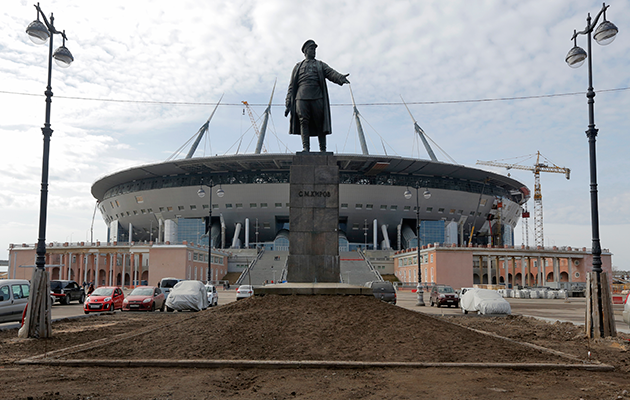 Finally, 10 years after ground was broken, the long-delayed Zenit Arena in St Petersburg has staged its first event.

Around 10,000 people attended an extreme sports show designed to test the logistics and security of the 68,134-capacity venue at Krestovsky Island on the site of the old 110,000 Kirov Stadium on the edge of the city.

Next up is a concert on Thursday next week which is expected to draw a 35,000 crowd to the stadium whose cost has been estimated at $1.3bn. This is more than three times its original budget and makes it possibly the world’s most expensive football venue.

The stadium is modelled on the Arena AufSchalke in Germany with a retractable roof and sliding pitch. However the Gelsenkirchen stadium cost ‘only’ around $400m.

Zenit will host the Opening Match and Final in June of the FIFA Confederations Cup, the warm-up event for the World Cup being staged in Russia next year. Then it will host eight games including a semi-final and third place playoff.

The new home for former UEFA Cup holders Zenit St Petersburg will also be monitored closely by international observers after various outbreaks of racist behaviour by Zenit fans over the years.

Initially Moscow’s redeveloped Luzhniki Olympic Stadium had been proposed as the other option for the start and finish of the Confederations Cup. St Petersburg was chosen ultimately because it was expected to be ready earlier.

In fact it has proved a close-run thing after a string of delays including problems with damp which affected early construction.

Entering 2013 the city cancelled its contract with developer Transstroy because of a need to “ensure uninterrupted construction of the stadium” after “substantial changes to the project.”

A new tender was won by Inzhtransstroy but two years later construction ground to a standstill again after reports that workers involved in the installation of electricity and piping had not been paid.

Vitaly Mutko, then Sports Minister and head of the Russian World Cup organising committee, admitted in April last year that work was still behind the latest new schedule

Vadim Tyulpanov, head of the Russian Federation Council Committee in charge of World Cup preparations, told TASS that installing the retractable roof and sliding pitch had raised particular problems because of the climate in what will be the most northerly stadium ever to host finals matches at the World Cup.

The situation became so serious that last July even Russian President Vladimir Putin weighed in via a decree published on the Kremlin’s website.

His note was reminiscent of the comment by former FIFA secretary-general Jerome Valcke, ahead of the 2014 World Cup in Brazil, that local organisers needed “a kick up the backside” to ensure the stadia were ready on time.

Putin’s decree instructed officials to “adopt comprehensive measures to eliminate the gaps” in the stadium’s construction schedule. Similar instructions were also issued to construction officials in Kaliningrad and Samara.

His words appear to have had the desired effect.