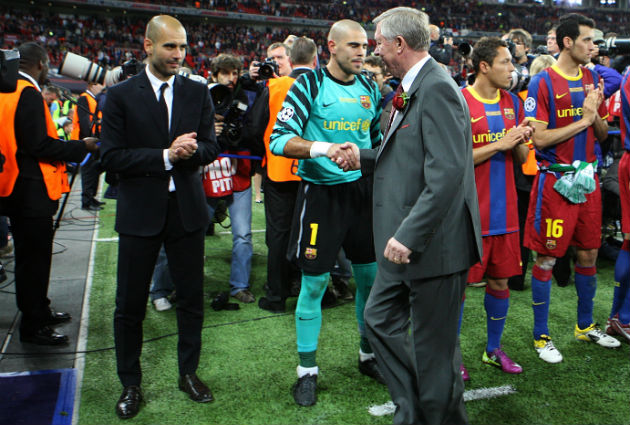 Sir Alex Ferguson has said that incoming Manchester City head coach, Pep Guardiola will find the rigours of English football challenging; but also said that he would be successful.

Guardiola’s style of play is admired across the globe, and he has amassed 19 major honours managing Barcelona and Bayern Munich.

However critics will say that he walked into those teams already possessing star quality; and he faces a tougher challenge rebuilding Man City in the heavily competitive climate of English football.

Ferguson believes that Guardiola is a fantastic coach with a wonderful work ethic – but like Jose Mourinho and Arsene Wenger – he will struggle intially.

Speaking to Sky Sports, he said:

“Without question Pep has got a fantastic work ethic about him, he demands that from all of his training sessions.

“Anyone who thinks they’re not going to work hard at City won’t last long. He has got great coaching ability, there is no doubt about that.”

He added: “Man City have made a real coup in getting him but Pep won’t find it easy, English football is not easy.

“Every foreign coach that has come to England will tell you that. Arsene Wenger was talking about that a few months after coming and even Jose Mourinho was.

“Pep will be a success but I don’t think he’ll ever replicate what he did at Barcelona because that was a high standard – they were the best.”

Sir Alex Ferguson also highlighted the challenges posed by the “bigger clubs” this season, will only fuel their desire to succeed in the new season.

He alluded to his own experiences adapting to the challenges posited by Mourinho’s first Chelsea side.

“You have to ask what the big clubs are going to do,” he said.

“If you take my time at United, when Chelsea and Jose came on the scene, in the first two years they had quick starts, so I had to accept that challenge.

“That’s what you have to do when you’re a big club. Arsenal, Liverpool and the other clubs have to accept the challenge when they are not good enough.

“They’ll have their own ambitions and will be desperate to win the league next season as much as City, so Pep there is not a guarantee they can win the league.

“That’s the beauty of our league. Arsenal, City, Liverpool, Chelsea, Tottenham will want to do something and now, of course, Leicester City are there. Who’s to say they can’t win it next season?”