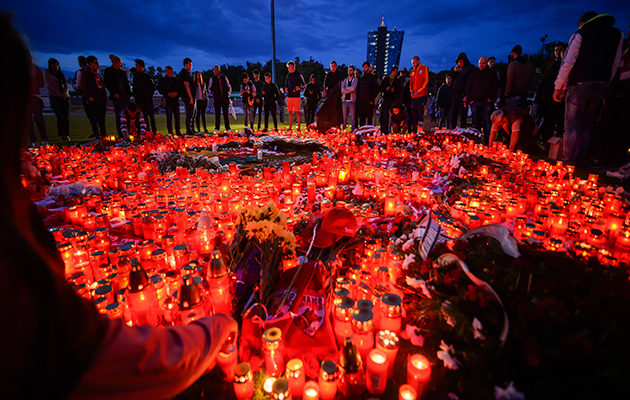 An inquiry into the death of Dinamo Bucharest midfielder Patrick Ekeng has revealed the ambulance company that took him to hospital had out-of-date equipment, according to the Romania’s interior ministry.

The Cameroon international collapsed on the pitch from a suspected heart attack seven minutes after coming on as a substitute in a match against Viitorul Constanta on Friday. He died two hours later.

After Ekeng’s death, world football’s players’ union, FIFPro, raised concerns about the standard of first-aid treatment for footballers in Romania, saying: “It is clear that some Romanian clubs have a history of skimping on medical facilities.”

“Our thoughts go out to everyone affected. It’s simply shocking.

“After local authorities complete their investigation, we expect answers as to whether or not this tragedy could have been avoided.”

Romanian players union AFAN also said they were concerned at the levels of treatment available to Ekeng.

AFAN president Emilian Hulubei said: “It would have cost as little as 400 euros per club per match to have state-of-the-art equipment available but the plan was not adopted.

“We are continually fighting for more rights for players. Footballers in Romania are a long way from being treated the way normal workers should be.”

The interior ministry said it had suspended the licence of private company Puls for at least 30 days and imposed fines totalling 23,800 Leu (£4,185) following an investigation of its equipment and the qualifications of its staff.

The ministry said that the investigation had revealed defibrillators with expired batteries in some ambulances belonging to the company, and medicine used in resuscitation procedures that had expired.

The results of an autopsy are expected to be published later on Monday.

Ekeng’s agent also criticised the treatment received by the 26-year-old.

“The ambulance arrived late,” said Hasan Anil Eken. “Actually there were three ambulances around the stadium but none of them had a defibrillator.”