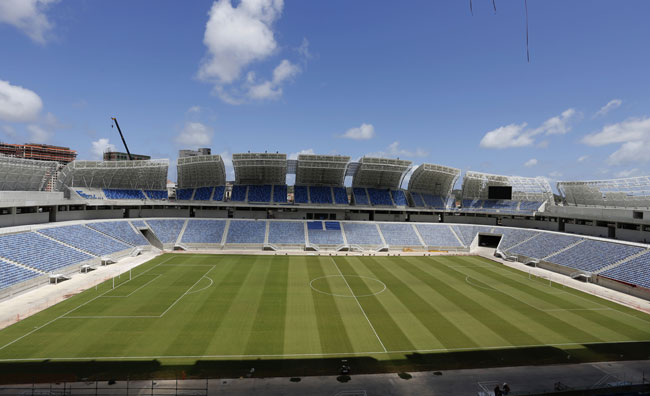 The latest stadium inaugurated for the World Cup in Brazil held its first match on Sunday, a day after demonstrators across Brazil protested against the tournament.

The Arena das Dunas in the north eastern city of Natal sustained superficial damage during protests, but Sunday’s opening match went ahead without incident in front of tens of thousands of fans.

About 1,000 people gathered in Sao Paulo and smaller demonstrations took place in several other cities on Saturday to protest about the costs of the World Cup. On its Facebook page, the Anonymous Rio protest group billed “Operation Stop the World Cup” as this year’s first act against the football tournament.

In Natal, demonstrators went to the Arena das Dunas and destroyed some protective fencing and put fire on temporary tents outside of the stadium.

The Arena das Dunas is the seventh World Cup stadium to be completed. The first match at the new venue first match was contested between Alecrim FC, a Brazilian football team based in Natal and owned by Englishman Anthony Armstrong Emery, and ABC, the oldest club in Rio Grande do Norte.

Alecrim FC (founded in 1915) was once a top flight Brazilian side however when Armstrong Emery bought the team it was going through a difficult period.  He has taken on the challenge of restoring the club to its former glory and has made several high profile signings (including Stefano Seedorf – the cousin of the former-Dutch international and newly appointed Milan coach Clarence Seedorf). The club has been state champion on six occasions and has previously played in the top division of Brazilian football

“I am so proud that my team, Alecrim FC, have been chosen to play in the first match at Arena das Dunas,”  said Armstrong Emery. “Despite reports suggesting that the stadium wouldn’t be completed on time, all the hard work has paid off and the construction looks amazing.

“We will do everything in our power to represent the best interests of our fans on this historic occasion, and the game will be a great opportunity for the team to prove themselves and make our supporters proud.”

Here’s the stadium in all its glory on opening night.