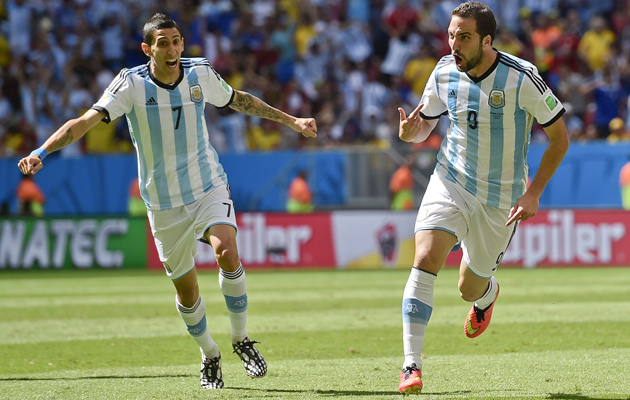 Match overview: Argentina reached the semi-finals with a 1-0 victory over Belgium in Brasilia. It was no means a five-star performance but they raised their game when it mattered most after Gonzalo Higuain gave their an early lead.

Higuain, frustrating and inconsistent in earlier matches, scored his first goal of the tournament, smashing a volley past Thibaut Courtois in the eigthth minute. After Lionel Messi had created space in midfield with a smart turn, Angel Di Maria tried to play in Pablo Zabaleta on the overlap but the ball bounced off a Belgian defender and into the path of Higuain, who thumped the ball past a static Courtois.

Messi was again outstanding but other Argentina players stepped up to the mark. Higuain played with renewed confidence, Javier Mascharano controlled the midfield, while Di Maria provided sparks for the attack. When Di Maria was forced off through injury in the 33rd minute, Belgium were offered some help. But midfielders Marouane Fellaini and Axel Witsel struggled to get close to Messi.

Argentina dropped deeper in the second half, though Higuain had a fine chance to extend their lead, crashing a shot across the top of the crossbar after a run into the area. After that, Argentina  did just enough to hold off Belgium’s attempts at an equaliser.

Belgium coach Marc Wilmots responded with attacking substitutions, bringing on Romelu Lukaku and Dries Mertens with half an hour remaining. Fellaini went close with a header that flew just over the bar but Belgium lacked ideas to break through a disciplined Argentina side whose midfield was well marshalled by Javier Mascherano.

Messi had an opportunity to add a second for Argentina in injury time when one on one with Courtois. But Belgium’s keeper produced a fine save.

Man of the match: Gonzalo Higuain. Argentina’s number nine, was a frustrated spectator for most of Argentina’s previous matches. But he took his goal with confidence and his overall play was impressive.

Matter of fact: Argentina have won their first five matches at the World Cup for the first time.

Talking point: Belgium, for all their talent, failed to rise to the occasion. Argentina proved far tougher opponents than USA, and key players, notably Eden Hazard, did not live up to their billing. Belgium coach Marc Wilmots had challenged Hazard beforehand to prove he is among the world’s best players. But Hazard was replaced by Nacer Chadli.