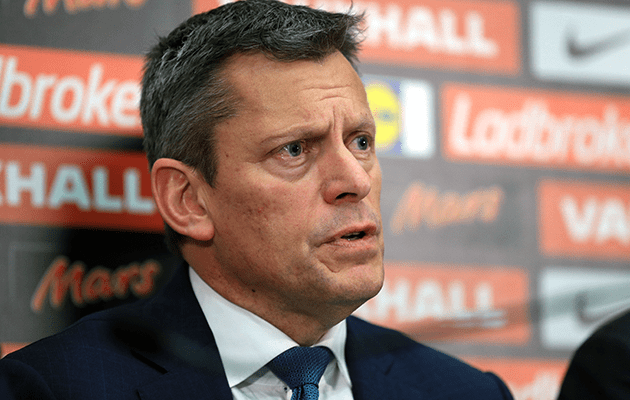 The Football Association has appointed Clive Sheldon QC to head its review into child abuse in English football, instead of Kate Gallafent QC “in the light of the increased scope of the review”.

Gallafent was the original appointee but the scale of the escalating crisis has forced her to step down “with respect to her other professional commitments”.

His appointment comes after prominent figures from the football world warned that individuals working “in the senior echelons” of the sport, have repeatedly been named by some of the players alleging sexual abuse. There have also been claims that a number of clubs have paid off victims to keep quiet.

Lawyers representing a new independent body, the Offside Trust, that has been set up to help the victims and their families said it was “extremely worrying” that they had received numerous testimonies from victims implicating individuals currently involved in football.

The news came as the FA outlined the full terms of reference for Sheldon’s review.

“The review will commence immediately,” said an FA statement. “The findings of the review will be reported to The FA board. It is accepted that no final date can be agreed at this stage given the passage of time and the time it will take to recall files for review and to locate all those relevant people to interview who no longer work for the FA.

“The precise number of players, alleged abusers and clubs as yet is unknown. The FA has determined that it is necessary to instruct external leading counsel to conduct a review into what if anything the FA and clubs knew about these allegations at the relevant time, what action was taken or should have taken place;

“The FA continues to work closely with the relevant authorities and respects the on-going investigation by the police being coordinated by Operation Hydrant into childhood sexual abuse in football.”

Greg Clarke, who became chairman of the FA in August, had previously stated that the sexual abuse crisis “is certainly the biggest one I can remember.”

Queens Park Rangers are the latest club to have become involved in the scandal. The Championship outfit issued a statement on Tuesday , stating that they take “very seriously” allegations of historical sexual abuse made against former employee Chris Gieler and will cooperate in any investigation.

A statement from the club read: “QPR Football Club has been made aware of the historical allegations made against former club employee Chris Gieler relating to child abuse in football.”

The statement continued: “The club takes these allegations very seriously and will cooperate fully in any forthcoming investigation. Any form of abuse has no place in football or society. QPR has robust recruitment procedures and safeguarding policies in place to ensure the protection and welfare of both children and vulnerable adults, and we employ a full-time designated safeguarding manager who works across all areas of the club with specific responsibility to the academy and community trust.”