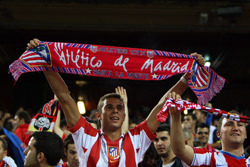 UEFA have ordered Atletico Madrid to play their next two Champions League home matches at least 300 kilometres outside of Madrid following crowd trouble earlier this month against Marseille.

European football’s governing body said the punishment could be extended to a third home match should there be further trouble at the club within five years.

The matches concerned are against Liverpool on October 22 and PSV Eindhoven on November 26.

A Uefa spokesman said the ruling was part of the organisation “acting with renewed strength” against racism.

UEFA also said that Atletico coach Javier Aguirre would be banned from coaching the side for their next two Champions League ties against Liverpool home and away. It said this was a punishment for “improper conduct” after he verbally abused a Marseille player.

Atletico were also fined €150,000 Euros for the improper conduct of supporters and lack of organisation, UEFA said.

The club have until October 17 to appeal the decision.

The Uefa ban follows the treatment of Marseille fans during and after Atletico’s 2-1 win a fortnight ago.

Monkey chants were aimed at the French club’s players, while the Marseille team bus was attacked after the match.