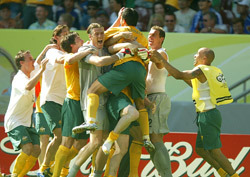 50% of World Cup goals come from set plays so back Beckham to score first against Trinidad. Click here for odds.

Australia showed plenty of fighting spirit to come from behind to beat an enterprising Japan side 3-1 in Kaiserslautern.

Japan had gone ahead midway through the first half and looked comfortable holding their lead until the introduction of Tim Cahill shortly after the interval.

The midfielder scored twice in the closing minutes to edge Australia in front and their victory was sealed by a fine solo goal by John Aloisi in stoppage time.

The result was harsh on Japan who had legitimate claims for a penalty turned down when the score was 1-1 and who had contributed hugely to a thrilling match.

Viduka brought the game to life on six minutes when burst into the penalty area brought a smart double save from Kawaguchi. Viduka was proving to be a constant menace for Australia, with Japan struggling to get a grip on the burly Middlesbrough forward.

Australia were dominant in the early stages as Japan struggled to gain a foothold in the game.

However, a neat turn on the edge of the penalty area by Takahara almost led to the opening goal, but the striker screwed his shot inches wide.

At the other end, Viduka’s neat back flick set up Bresciano but his shot was well saved by the impressive Kawaguchi.

On 25 minutes, Japan took the lead in controversial circumstances when a harmless-looking cross from Nakamura drifted over the head of Schwarzer. The keeper appealed in vain for a free-kick and television replays indicated he had been impeded by Takahara.

Kewell almost equalized for Australia from the restart but the Liverpool winger blazed just over from 20 yards.

Japan began taking the game to Australia and Guus Hiddink’s men had trouble containing the effervescent Nakamura. Twice he surged into the box, but his finishing let him down on each occasion. However, the goal definitely seemed to have inspired Zico’s team and their movement began to cause problems for the more prosaic Australian team.

Just after the interval, Hiddink decided to act to stem the flow of Japanese attacks by introducing Tim Cahill for Bresciano.

Schwarzer was fortunate not to concede a second when he raced out his goalmouth and headed the ball into the path of Nakamura, but the Japanese forward dwelled too long before shooting and Australia managed to clear the danger.

At this stage Japan were taking advantage of the acres of space vacated by a tired-looking Australian side. Repeatedly they broke down the flanks and only poor delivery prevented them from extending their lead.

For Australia, the substitute Kennedy came close when he flung himself at a corner but his header flew past the post. Moments later Viduka almost put Australia on level term’s with a venomous free-kick but his effort was superbly saved by the inspired Kawaguchi.

Although Australia were now dominating dominated possession, Japan had a wonderful opportunity to secure all three points with 15 minutes remaining. They cut through the Australian defence, this time with a man advantage, but a poor final ball saw another good chance squandered.

With seven minutes remaining Australia were rewarded for their pressure when substitute Cahill was first to react after the otherwise impressive Kawaguchi flapped at a corner.

Despite conceding their lead, Japan looked the likelier to secure a winner and they will have felt aggrieved when Cahill scythed down Takahara in the penalty area, only for the referee to wave away appeals for what looked a blatant penalty.

Moments later Fukunishi had a wonderful opportunity to win the game for Japan but he flashed his shot just wide.

Play was switched to the other end and the ball fell for Cahill on the edge of the area and the Everton midfielder curled a wonderful shot in off the post.

Aloisi added the icing on the cake when he powered through the demoralised Japanese defence and finished smartly with a left foot drive.

50% of World Cup goals come from set plays so back Beckham to score first against Trinidad. Click here for odds.