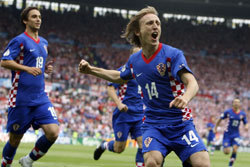 Croatia laboured to a 1-0 victory over co-hosts Austria in the opening Group B game.

The Croats, who had been fancied as dark horses for the tournament, looked pedestrian for the most part, while Austria can consider themselves unlucky to suffer the same fate as their co-hosts Switzerland in losing a game in which they largely dominated.

Austria suffered the worst possible start to their tournament when they conceded a penalty within three minutes of the kick-off. Ivica Olic burst into the box to collect a pass from Luka Modric, only to be bundled over by Rene Aufhauser. The referee had no hestitation in pointing to the spot, and from the resulting penalty Modric coolly converted.

The goal settled Croatia and they controlled possession without really looking like extending their lead. Mladen Petric had their best chance when he was found unmarked at the far post but his thunderous shot flashed high wide.

Confidence appeared to breed complacency within the Croat ranks, and Austria, who had struggled to get a foothold in the early stages, began to enjoy some possession as the interval approached. Their best chance fell to Standfest who headed wide from close range, while Simunic had to be alert to scramble clear a dangerous cross from Martin Harnik.

After the break Austria continued to take the game to their opponents and although clear-cut chances were few and far between, their endeavours raised the decibel level in the Ernst Happel stadium, as the home crowd sensed an equaliser was imminent.

With veteran Ivica Vastic, at 38, the oldest outfield player in the tournament, appearing as a second half substitute Austria began to enjoy prolonged spells of possession and with Harnik a menace on the right wing, Croatia were forced on the backfoot for large parts of the second half.

The co-hosts almost made the breakthrough when a shot from Korkmaz was parried by keeper Stipe Pletikosa and in injury time, Kienast glanced a header narrowly wide.