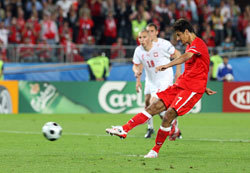 Austria scored an injury time penalty to earn a 1-1 draw with Poland and preserve their slim hopes of qualifying for the knockout stages of Euro 2008.

Josef Hickersberger’s side had trailed to a first half Roger Guerreiro goal, scored against the run of play, and the Poles must have thought they had done enough to take all three points until referee Howard Webb pointed to the spot.

Austria began the match at a furious pace, displaying a hitherto unseen spirit of adventure as they tore into the lackadaisical Poles. Indeed, were it not for the superb reflexes of keeper Artur Boruc, the co-hosts could well have been three goals up within the first fifteen minutes.

Boruc was first called into action on 11 minutes when Austria broke the feeble Polish offside trap, but Martin Harnik saw his shot pushed wide. Two minutes Harnik missed an even easier chance after being set up by the lively Umit Korkmaz – again Boruc was on hand to pull off the save. Moments later it was the turn of Christoph Leitgeb to be denied by Boruc after being put through on goal.

Given their complete domination and their inability to take advantage of the chances that came their way, there was a sense of inevitablity about Poland taking the lead. In the Poles’ first meaningful attack of the half, the ball reached Marek Saganowski and his cross was parried into the path of Guerreiro, who converted from close range.

It looked like a killer blow for Austria and thereafter they struggled to recapture the zest that had characterised their earlier play. Gradually, as the game wore on it was Poland who looked the more composed side and with Guerreiro producing some neat touches, they looked the far likelier scorers in the second half.

Austria keeper Macho was called into action on a number of occasions, pulling off a double save to deny Jacek Bak and Mariusz Lewandowski. Shortly afterwards, Macho was forced to pull off an acrobatic save to tip over a thunderous free-kick from Jacek Krzynowek.

With Austria seemingly running out of ideas and Poland controlling the game, there looked no way back for the co-hosts. However, with just seconds remaining, Webb spotted Marcin Wasilewski tugging the shirt of Sebastian Prodl and immediately pointed to the spot.

Substitute Vastic was happy to grab the lifeline and he hammered home the spot kick to earn his side, what on the balance of play, was a deserved point.

Polish coach Leo Beenhakker strode onto the pitch to confront Webb at the end of the game, but by then the damage had been done.

The result means that both sides have a theoretical chance of reaching the last eight, although on this form, whether either team is capable of achieving that, remains a moot point.