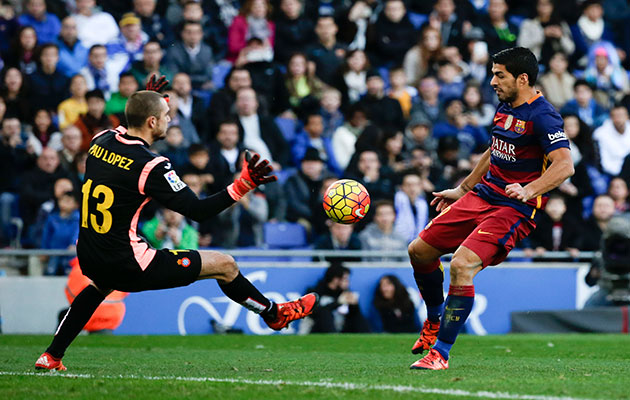 Espanyol had two players sent off in a fiery encounter at Camp Nou. Hernan Perez and Papakouly Diop were given their marching orders within the space of four second-half minutes.

It was Suarez’s clash with Diop which allegedly caused a confrontation after the final whistle.

According to referee Juan Martínez Munuera’s report, which was quoted by Catalan newspaper Sport, the Senegal international told Suarez, “I shit in your whore mother”, and was shown a red card in the 75th minute.

“At the end of the game, once in the tunnel, Barca’s No9, Suarez, Luis, while the Espanyol players were coming up the stairs, waited for them and shouted at them on various occasions,” read the report.

“He said: ‘I’m waiting for you, come here! You’re a waste of space’. It provoked a confrontation between players of both clubs and the present security guards had to get involved, as did coaches of both teams.”

“It isn’t down to the coaches or the players to keep the peace,” Luis Enrique added. “It’s down to the referees to ensure that we play football and not American football. There was some tension. I’d like it if there were more football, fewer interruptions and no injuries.

“When someone oversteps the mark, it’s down to the referees to keep order. Of course there’s tension in these games. The players know each other, they’re two teams with a special rivalry, but that rivalry has to remain positive.”

Espanyol received a total of eight yellow cards and two reds during the match, although Barcelona captain Andres Iniesta dismissed suggestions that this was a violent encounter.

“Violence is a very strong word, in games like this there’s a lot of rivalry and contact,” he said.

There were also claims that goalkeeper Pau López stamped on Lionel Messi.