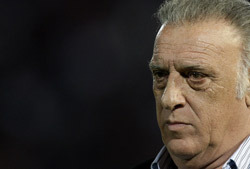 Alfio Basile has resigned as coach of Argentina, the country’s football association have confirmed.

That defeat came on the back of a poor run of form which has seen them win just once in their previous five qualifiers.

“Basile spoke to the AFA president [Julio Grondona] and quit for personal reasons,” spokesman Ernesto Cherquis was reported by Reuters as saying.

“The national team’s committee tried to persuade him to postpone his decision but Basile was very decided, very determined … and against a man who has made up his mind and has Basile’s dignity, we were swimming against the tide. The resignation has been accepted. He had pain in his heart.”

Basile had previously led Argentina to the 1994 World Cup in the USA before they were knocked out in the second round by Romania.

Basile took charge again after the 2006 World Cup following Jose Pekerman’s resignation and guided Argentina to the final of the Copa America in 2007, where they lost 3-0 to arch-rivals Brazil.

Sergio Batista, a member of the 1986 World Cup-winning side, is expected to be among the front-runners to replace Basile after leading Argentina to gold at this summer’s Olympic Games.

“I’m convinced I can coach the senior team. If it’s my turn, I will take it,” he said.

Grondona admitted Basile’s decision had caught him by surprise.

“I’m surprised. Basile told me he resigned for personal reasons. I don’t know which those reasons are, time will tell,” he said.

“I wasn’t expecting this. I guess he was feeling uncomfortable for some reason but if we look at our qualifying position, we were not too bad.”

Grondona echoed Bialo’s comments that the AFA had not yet begun the search for a new coach.

“We can’t talk about the successor yet. It’s too soon,” he added.