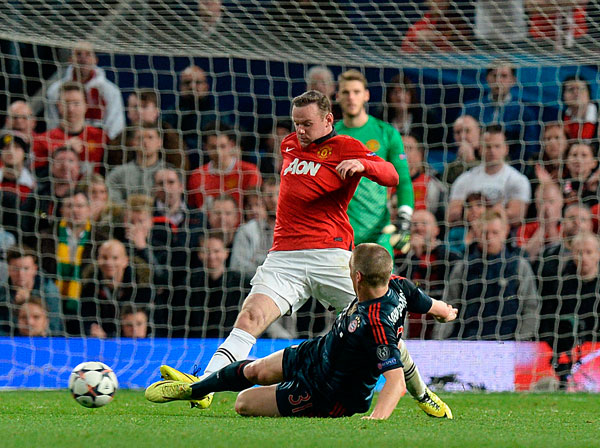 Bayern Munich have banned British tabloids The Sun and The Mirror from the Allianz Arena for the second leg of their Champions League quarter-final against Manchester United after both papers produced insulting puns about Bastian Schweinsteiger after the first leg at Old Trafford.

The Sun opted for “You Schwein!”, while The Mirror lowered the bar even further with “You Dirty Schwein” in relation to the incident that saw the Bayern midfielder sent off for fouling Wayne Rooney.

Schwein, in case you were unaware, is the German word for pig. Coincidentally, Rooney is the English equivalent.

A statement issued on Bayern’s official website described the headlines as “disrespectful, discriminatory and personally insulting” towards Schweinsteiger – adding that the two tabloids would be banned for the second leg next Wednesday:

“In the Champions League…UEFA has organised a big campaign called ‘RESPECT’ where all players are required to wear that logo on their shirts.

“Due to breaching this agreement when four attendees at our game with Arsenal showed a disrespectful banner in the Allianz Arena, 700 fans will now be locked out (of the United game) and we were fined €10,000. We have accepted this.

“(Therefore) representatives of ‘The Daily Mirror’ and ‘The Sun’ will not be granted media accreditation at the Allianz Arena for the Manchester United match.”

There is hope of a reprieve for the newspapers, provided they issue an apology to Schweinsteiger.

Bayern’s Media director Markus Hörwick said:  “You have asked whether there is a possibility that we allow you in.

“We have said that this possibility there quite simply, by officially apologize to Bastian Schweinsteiger…”

“You have chosen a great way to offend Basti. Now we expect the apology on the big way.”