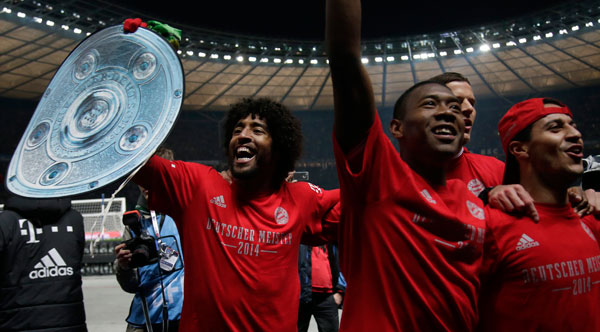 Goals from Toni Kroos, Mario Gotze and Franck Ribery gave Bayern Munich a 3-1 win at Hertha Berlin on Tuesday night and clinched the German title for a record 24th time.

The Bundesliga champions, who won last year’s Champions League and face Manchester United in this season’s quarter-finals, wrapped up their domestic championship in record time, with seven games to spare. But their trailblazing run this term doesn’t stop there.

Among the other league records Bayern have set this season are:

• No team has ever been crowned German champions earlier than March 25 (they held the previous record last year, when they won the title by April 6).

• It was also their 10th consecutive away win.

• It is 33 games since they were beaten away from home.

• They have scored at least twice in their last 19 games.

• They have scored at least once in their last 64 games.

• They have scored in their last 33 away games.

• No other side has ever been unbeaten in their first 27 games of a Bundesliga campaign.

• Coach Pep Guardiola has not lost in his first 27 games – the previous record for a Bundesliga manager was Kaiserslautern’s Karl-Heinz Feldkamp with 14 in 1978-79.

It seems ridiculous to think that when Jupp Heynckes walked away from Bayern last season on the back of an historic treble, he was described as an impossible act to follow. Yet, in his own assured, stylish, and at times effortless way, Guardiola has shown that he is more than up to the task.