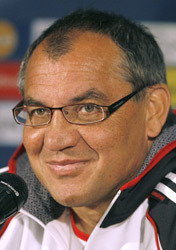 Bayern Munich have announced the sacking of coach Felix Magath after a disappointing run of results.

Former boss Ottmar Hitzfeld has replaced Magath at the Allianz Arena on a contract until the end of the season.

Club chairman Karl-Heinz Rummenigge said the club had to react to the “current developments.”

“We regret having to make this decision,” said Rummenigge.

“Felix Magath has had amazing success over the last two-and-a-half years, especially winning the double two years in a row.

“But we had to take a look at recent developments and react.

“We are worried about qualifying for the Champions League next season and that was what forced our hand.”

Magath replaced Hitzfeld in July 2004 and guided the club to league and cup doubles in each of his first two seasons in charge, but the club have struggled to match their lofty standards in the current campaign.

Bayern sold midfielder and Germany captain Michael Ballack to Chelsea at the end of last season and their form this term has suffered as a result.

In fact, Magath wrote off the side’s chances of catching the leaders after Tuesday’s home draw with Bochum.

“We don’t need to talk about the title any more,” Magath told reporters. “We have to make sure of getting second or third.”