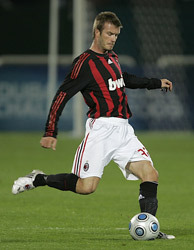 David Beckham was delighted to have scored his first goal in a Milan shirt and admits he might yet stay in Italy.

The former England captain fired home the fourth goal in Milan’s 4-1 triumph at Bologna on Sunday.

“The most important thing is that we won the game,” Beckham told Sky Italia.

“I think we played well – even when they went down to ten-men we carried on playing our game.

“It is great for me to score my first goal and I will keep this jersey.

“But it is more important hat the team won and we played well.”

Beckham added that he may extend his stay at the San Siro.

“At the moment I’m enjoying this experience. I’m at one of the biggest clubs in the world. And having won gives us confidence to continue,” he said.

Beckham is due to return to Los Angeles Galaxy on March 9, but Milan coach Carlo Ancelotti remains hopeful he may stay.

“However, our hands are tied as he has a clear contract.

“We can’t do anything to change things, he can surely do so. He has to resolve his contract with the American team.

“I am realistic, we are capitalising on his presence at the moment and so, while we have him at our disposal, I don’t see why we shouldn’t make the most of his presence, as he is giving us a great deal.”