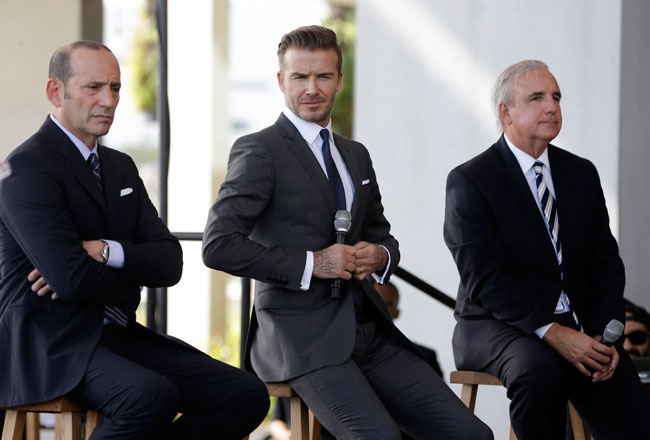 David Beckham has ended speculation about his plans to create a new MLS franchise, by confirming his intention to bring a club to Miami.

”This is an exciting time, and something we’re really looking forward to bringing to Miami,” Beckham told a crowd of more than 300 people.

Beckham has been examining possible stadium sites and is seeking investors to assist with costs. Among those who might become involved is Miami Heat basketball star LeBron James, who has had recent conversations with Beckham about bringing a team to Miami.

”LeBron has become a friend over the last few years,” Beckham said. ”We spoke about this on the business side and also as friends. He’s very interested in this.”

So, plenty of work still needs to be done, not least on the branding of the new franchise, which for the time being remains nameless. That has not stopped enterprising bookmakers setting odds on potential names for the new club.

Betfair has come up with a few options for the new franchise, with Miami Beckham United the favourite at 3-1 and several alternatives available at higher prices, including Miami Metrosexuals at 20-1.

And at 1000-1 is Miamchester United — a combination of Beckham’s new team and Manchester United, the club where his career began.

Amazingly, the obvious choice, Miami Vice, appears to have been overlooked. Get your money on that now.