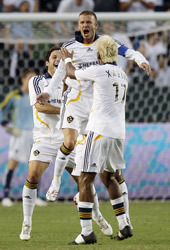 David Beckham scored his first goal for Los Angeles Galaxy to help secure their place in the SuperLiga final.

The England midfielder, starting a game for the first time for his new team, opened the scoring with a trademark free-kick on 28 minutes against DC United, before setting up the second with a pass for Landon Donovan.

Beckham earlier issued a plea for patience to LA Galaxy fans frustrated with his lack of playing time since his arrival in America.

“It was nice to get the early goal,” he said. “But it was not just about my goal and Landon’s goal.

“So it was more pleasing for the performance.

“I’ve always said that everybody has to be patient. I had to let nature take its course with my ankle. It’s an injury and there wasn’t much I could do about that.

“I was happy to be out there with the team and happy to be playing again so we’re very happy.

“We want to do the same again and again and again. It’s a learning curve each game and that’s how we want to take every game. I think it’s important that we push on from here now.

“We’ve won, we’re in a final but it’s more important now that we just play as a team and carry on winning.”