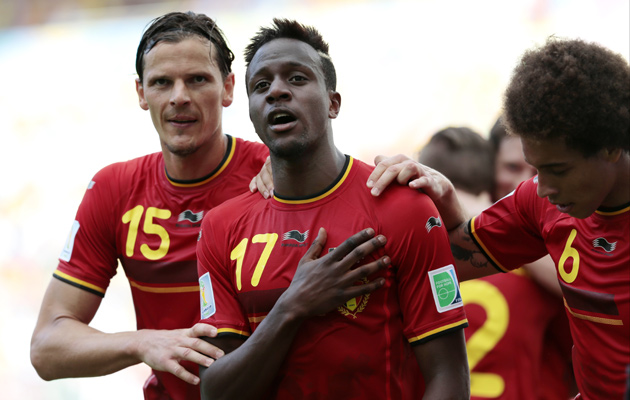 Match overview: Belgium snatched a late winner but neither side deserved to win such a drab game. After a largely soporific second half, Belgium came to life in the final 10 minutes. Mirallas, on for Mertens, hit a post from an 84th-minute free-kick but that, remarkably, was Belgium’s first shot on target. Then Hazard found his way to the byline, before pulling the ball back for another substitute, Origi, to fire home.

Key moment: Russia had a wonderful moment to take the lead just before half-time. Kokorin rose between Belgium’s two centre-back but headed wide from a wonderful position. It turned out to be Russia’s best chance of the game.

Man of the match: Hard to pick after such a poor display by both sides. Mertens had a lively first half, while Hazard perked up in the final few minutes. But Belgium captain Vincent Kompany defended well and at least ensured that, while his team struggled to score, they rarely gave Russia much space to attack.

Matter of fact: Divock Origi became the first teenager to score a WC goals since Lionel Messi against Serbia in June 2006.

Talking point: This was yet another game settled by a substitute but the decision by Marc Wilmots to replace Lukaku with Origi was hardly a stroke of genius. For most of his time on the pitch, Origi looked lost, making the wrong runs and failing to contribute anything positive to Belgium’s attack. Belgium have reached the second half, but on this evidence – just two shots on target – they will not threaten the tournament’s best teams.