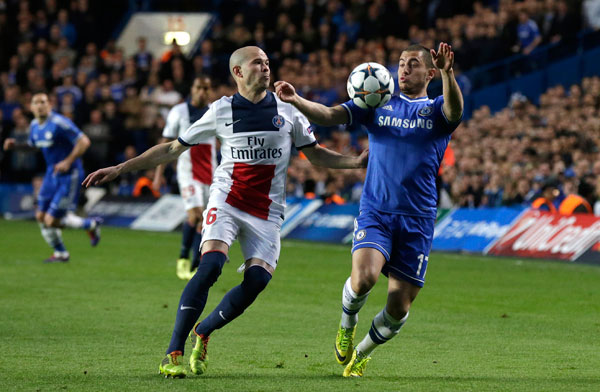 PSG have been linked with a move for the Belgian international, as well as his Chelsea midfield partner Oscar, in the summer transfer window.

Hazard has been Chelsea’s most consistent performer this season, scoring 14 goals in 33 Premier league matches and a further three in Europe.

However, Belgium boss Wilmots believes a move to PSG would take his game to another level. Although given that Chelsea knocked the big-spending French club out of the Champions League on Tuesday, it is unclear whether that level would be up or down.

The Belgian star limped off after 18 minutes against PSG, which the Blues won 2-0 to advance to the Champions League semi-finals.

When Hazard was replaced, PSG coach Laurent Blanc shook hands with the player.

“It’s an opportunity to be taken into serious consideration if he wants to be part of the category of players who make the difference,” Wilmots told French TV.

“It’s time to raise his level. Hazard and Ibrahimovic are two different players – but highly complementary.”

Hazard is of course no stranger to French football. Chelsea signed him from Lille, where he won the league and cup double in 2011 and was twice named the Ligue 1 Player of the Year.