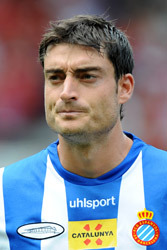 Liverpool manager Rafa Benitez believes that new signing, Albert Riera, is the type of player the club has been lacking in recent seasons.

Riera, 26, has signed a four-year contract after Espanyol agreed to his release.

The Spaniard had a short spell on loan with Manchester City in 2006 and has also played for Real Mallorca and Bordeaux.

“Riera has the qualities we were looking for. He’s a left footer who normally plays on the left wing,” said Benitez.

“He’s good in the air, strong, powerful and a good crosser of the ball.

“He’s the kind of player we have been talking about. He can beat players and get good deliveries into the area for our strikers.

“We’ve known about him for a long time, since he was at Mallorca and then through his career with Bordeaux, Manchester City and Espanyol

“He can talk English and of course he knows the Premier League, which is a big bonus.

“Usually foreign players need time when they go to a new country, but Riera already knows the league and the style of football.

“He also had offers from other English clubs but he said no to them because he wanted to come and play for us.

“That means a lot to me because it shows the commitment he has to play for Liverpool.”