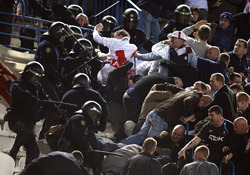 Bolton Wanderers have made an official complaint about “overzealous and disproportionate” treatment of their supporters by Spanish police during Thursday’s UEFA Cup tie against Atletico Madrid.

The club contacted Uefa after the 0-0 draw and club chairman Phil Gartside said he would take the issue to the “highest level” to get an explanation.

“I have great sympathy for any of our supporters who have been injured by what is clearly an overreaction by the Spanish police,” he said.

“Our fans gave us magnificent support on the night and this has taken the shine off what has been a momentous evening in the club’s history.

“Bolton Wanderers Football Club will be pursuing the matter at the highest level and seeking an explanation from the Spanish authorities.

“We will also be conducting our own internal investigation and information-gathering process.”

Bolton said there were “a number of assaults and unprovoked baton charges” and about 17 fans were injured.

An official statement released by the club said: “The directors of Bolton Wanderers Football Club are upset and disturbed at the apparent overzealous and disproportionate actions of the Spanish police towards our supporters during Thursday night’s UEFA Cup return-leg at Atletico Madrid.

“The club’s fans were subjected to a number of assaults and unprovoked baton charges before, during, and after the game, in addition to the aggressive use of police horses to manoeuvre fans towards the Vicente Calderon stadium.

“Bolton Wanderers has launched an official protest with UEFA and its security delegates, who witnessed the behaviour of the local police force, and the club is currently in liaison with the Greater Manchester Police and the British Embassy to ascertain further information.

“Bolton Wanderers supporters have an impeccable reputation and an excellent record of good behaviour when travelling abroad to European matches, and the club believes the actions of the Madrid police are entirely unacceptable.”