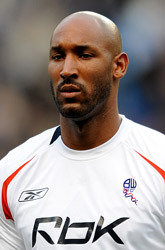 Bolton have turned down a bid from Chelsea for striker Nicolas Anelka.

The future of the French international has been the subject of speculation for some time and Anelka admitted last week he would be interested in a move to Stamford Bridge.

A number of other top clubs, including Manchester United, had been linked with moves for Anelka, but Chelsea are the first side to make a bid.

“We can confirm we have made an official offer for the transfer of Nicolas Anelka, which is being discussed with Bolton Wanderers,” read a statement on Chelsea’s official website.

But Bolton have turned down Chelsea’s first offer and the London club may now decide to come back with an increased offer as they attempt to secure his services during the transfer window.

Chelsea will be without Didier Drogba for the next month as he takes part in the African Cup of Nations for Ivory Coast and with the the likes of Claudio Pizarro and Andrei Shevchenko performing inconsistently this season, coach Avram Grant has set his sights on signing Anelka.

It is understood that their opening bid was in the region of £11million.

Anelka joined Bolton in 2006 from Turkish club Fenerbahce for a club record £8m. He has also played for Manchester City, Liverpool and Arsenal in the Premier League and won the Champions League whilst at Real Madrid.