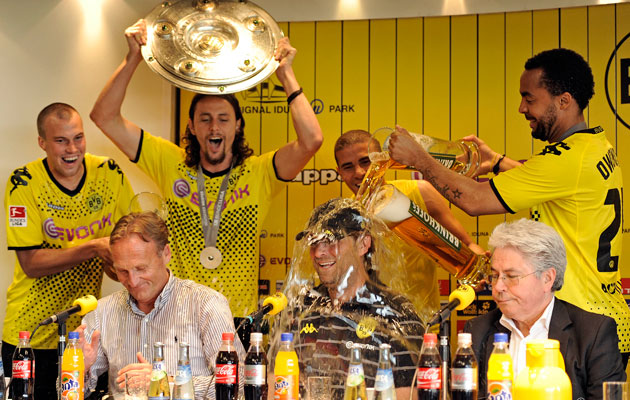 Borussia Dortmund’s players have attempted to atone for their dreadful start to the season by pouring pints of beer for supporters at the club’s Christmas party.

Jürgen Klopp’s side dropped to the bottom of the table over the weekend after losing 2-0 to Eintracht Frankfurt.

But despite Klopp admitting that his players now find themselves in a relegation battle, several players including captain Roman Weidenfeller and fellow first-teamers Mats Hummels, Marco Reus, Ilkay Gundogan and Nevan Subotic all helped out behind the bar.

“BVB’s players signed autographs for over two and a half hours and finally served behind the bar, another thank you for the fantastic support from the stands during a season that has so far brought little in the way of sporting cheer,” read a post on the club’s official website.

At a press conference earlier today, Klopp admitted that the team has been struggling but is confident that they can turn their season around.

“I don’t need a vote of confidence, I’ve had it a thousand times before. The team needs it now,” he said. “It’s a little tough at the moment, and we’ve got to be ready for that. I am.

“I know how a relegation battle works and how a team has to think in order to get out of it. We’ve got to learn not to get down about our mistakes, instead stay calm and keep playing football.”

Klopp says his side must keep their nerve and has threatened to make changes for Friday’s encounter with Hoffenheim.

“Friday is our High Noon. We have to show what we are made of,” he said.

“We are trying to find out in training who can withstand this situation and will make our selection accordingly.”